In the north Pacific Ocean, four currents come together to create a huge clockwise-churning vortex that stretches from the equator up to southern Canada. Trapped within this massive gyre is an ever-growing swell of trash known as the Great Pacific Garbage Patch.

It’s not one island-like accumulation of debris. Clumps of plastic bottles, abandoned fishing gear and beer crates are scattered across the expanse of ocean from Japan to California, though largely concentrated in two broad patches in the eastern and western parts of the Pacific. Floating below the surface are many, many microscopic plastic particles. All of it pollutes our planet.

“On one of our voyages, we came across this field that must have had four to five thousand big white laundry detergent bottles,” said Mary Crowly, founder and executive director of the Ocean Voyages Institute, a nonprofit that has been working for over a decade to clean up the gyre.

“They were spread out over several miles of ocean and I’m sure they weren’t all dumped in the ocean together,” she told HuffPost. “The ocean has an amazing way of sorting things.”

“On another one of my voyages,” she said, “I found what I called the graveyard of ghost net fragments.” Ghost nets are plastic fishing nets that have been lost or dumped overboard, often chopped up by boat propellers, and left to float in the oceans or get caught on reefs. 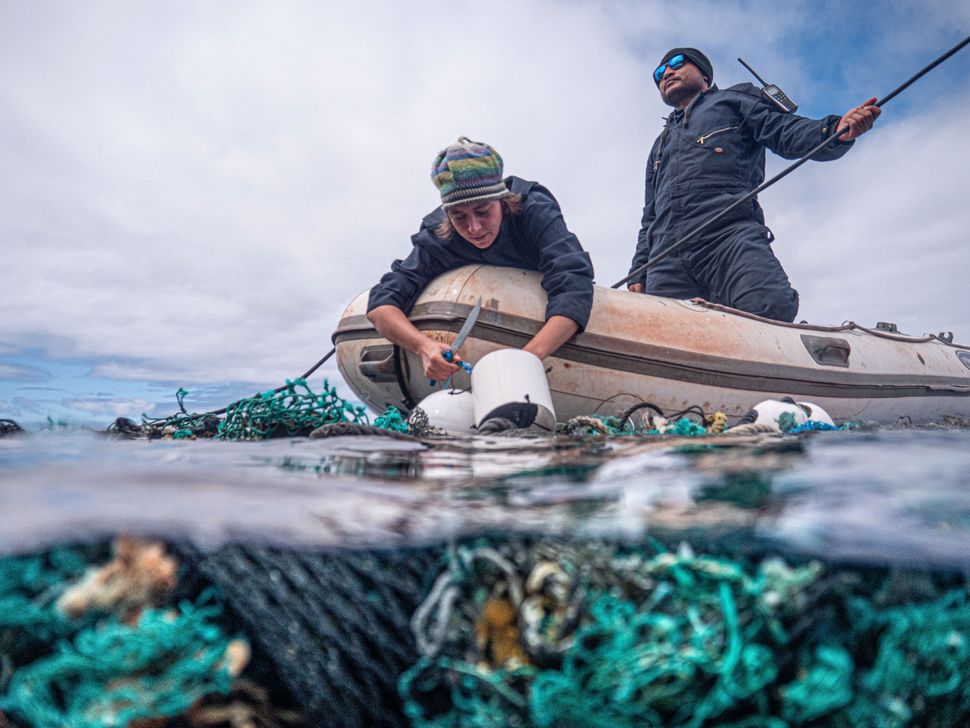 No one knows for sure how much plastic is in the Pacific Ocean. There’s an estimated 88,000 tons of artificial debris in the eastern stretch of the Great Pacific Garbage Patch ― a 617,000-square-mile expanse between Hawaii and California first discovered in the late 1990s.

Nearly half of the waste is discarded fishing gear, in which marine animals can become fatally entangled. But microplastics ― tiny particles less than 5 millimeters long ― are also an increasingly significant source of the pollution. Over time, sunshine and the water’s turbulence work to break down larger pieces of plastic. Harmful chemicals leach into the water and the resulting microplastics can be mistaken by animals as food, potentially killing them.

It’s a monumental problem to tackle. It would take 67 ships one year to clean up less than 1% of the waste, according to one estimate from the National Oceanic and Atmospheric Administration’s Marine Debris Program. And the problem is growing worse. A July report, commissioned by the Pew Charitable Trusts and sustainability consultancy SYSTEMIQ, warned that plastic waste in the oceans could nearly triple over the next two decades unless the world takes unprecedented action ― everything from producing less plastic to improving recycling and waste collection infrastructure to stop plastics from entering the sea.

But when they do, that’s where groups like the Ocean Voyages Institute come in. 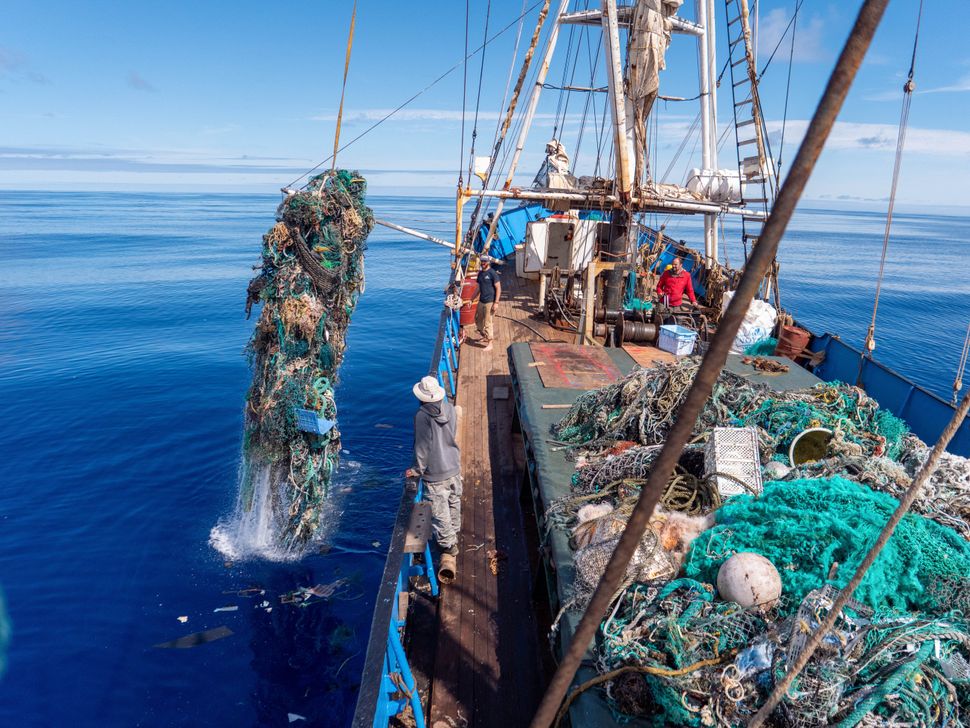 Crowly and her team made their first trip to the garbage patch in 2009 (although she doesn’t like the term “garbage patch” since that sounds like a small problem: “It’s a huge area in terms of distance and a phenomenal amount of plastic garbage”).

Together with six scientists, including one from the California Environmental Protection Agency, they spent a month out on the water. The goal was to assess the situation, surveying the types and amounts of plastic out there, and test their cleanup methods. They returned with more than 3 tons (6,000 pounds) of ocean debris. Since then, the Ocean Voyages Institute has conducted cleanup missions nearly every single year.

While on their cleanup voyages, the nonprofit also gathers data to help them better identify, track and remove ocean waste.

Industry equipment like barges, cranes and excavators are used to pull up hundreds of pounds of heavy ghost nets tossed overboard by fishing fleets. Fishing nets are also adapted by the team to scoop up plastics ― from bleach bottles to car fenders ― floating up to 10 feet below the surface.

Smaller items like toothbrushes and children’s toys can be retrieved by adapting oil skimming equipment, which often sits unused until the next disaster strikes. As for recovering microplastics, experts around the world are still trying to solve that problem. 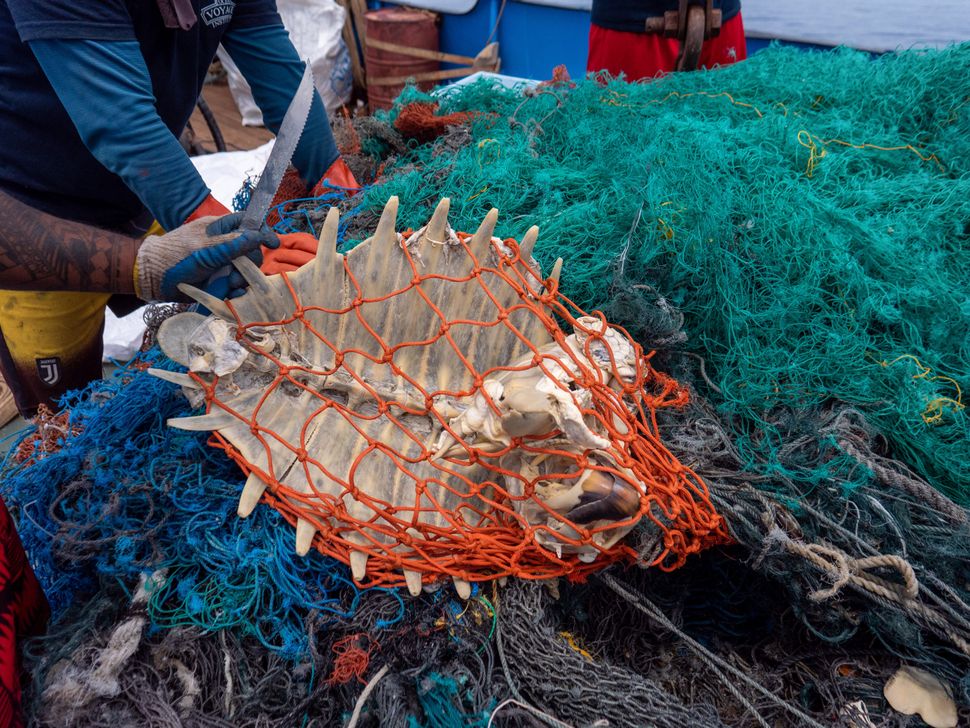 Once back on land, the plastic garbage gets a second life. “None of it goes back to the ocean, and we’re sure that none of it goes into landfills,” said Crowly.

Instead, the debris has been become fuel to power homes in Hawaii, turned into sculptures and museum displays, remade as building materials and insulation, and transformed into bracelets, key chains and dog leashes.

Last year the nonprofit managed to collect 42 tons (84,000 pounds) of waste, Crowly said. While it can be daunting to battle a never-ending flow of fresh waste seeping into the blue, every little bit counts.

“What we brought in in 2019 really helps ocean creatures. We definitely saved the lives of some whales and dolphins and fish and turtles,” she said. 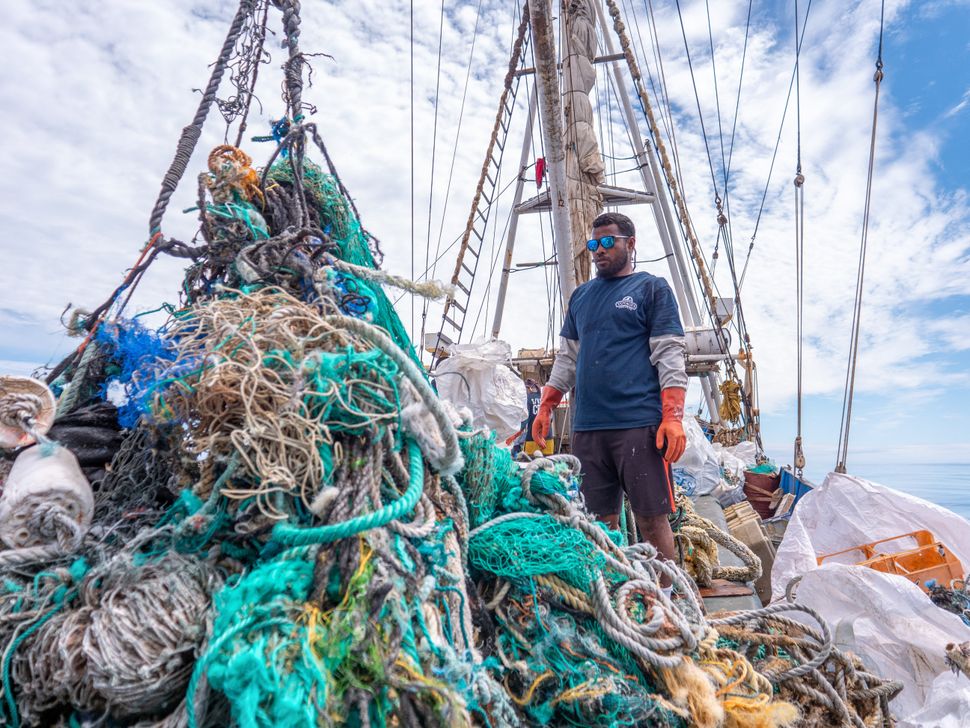 This summer, however, was even more productive.

The team wrapped up two cleanup trips and returned to Hawaii in August with a total of 170 tons ― 340,000 pounds ― of netting and consumer plastic waste. The nonprofit claims the June journey, which collected 206,000 pounds of plastic, was the largest single open-ocean cleanup in history.

“That feels like that’s really beginning to address the issue more,” said Crowly, who coordinated matters from Hawaii, bringing together information, including from satellites, to give the boat the best shot at finding trash to collect.

The coronavirus pandemic, of course, has posed its challenges ― the crew had to make sure to quarantine and get tested for COVID-19 before heading out ― and a momentary gap in funding meant they almost weren’t able to set out on the second voyage. But Crowly remains optimistic. The nonprofit aims to collect 564,000 pounds next year to reach its goal of collecting a total of a million pounds of ocean trash by 2021. “We are on a roll,” she said.

HuffPost’s “This New World” series is funded by Partners for a New Economy and the Kendeda Fund. All content is editorially independent, with no influence or input from the foundations. If you have an idea or tip for the editorial series, send an email to [email protected]