Well into her 80s, the wood sculptor and basket maker Dorothy Gill Barnes was always on the hunt for raw material. In her case, that meant trees.

If she received a tip about a construction site or landscaping project in the suburb of Columbus, Ohio, where she lived, she’d hop on her rusty bike and dart to the scene. If she heard buzzing chain saws as she approached, that was a promising sign, because a newly fallen oak or maple tree might be waiting for her. Soon, she’d return with her station wagon.

Ms. Barnes was especially known for making imaginative sculptures from bark, which in her hands seemed as malleable as clay. From strips of mulberry tree bark, she produced an intricate vase. To make a stout bowl, she folded hunks of poplar bark. She once wove a basket on a loom with lichen.

She also created sculptures from wood, like a hollowed-out oak tree she encased with apple suckers and a work featuring branches of cherry and paulownia linked together like a necklace with glass and wire.

“The things that I like to do most in my artwork are outdoors,” Ms. Barnes said in a video for her 2016 exhibition at the Center for Art in Wood in Philadelphia. That could involve harvesting from a tree, say, that wanted “to share its bark with me.” 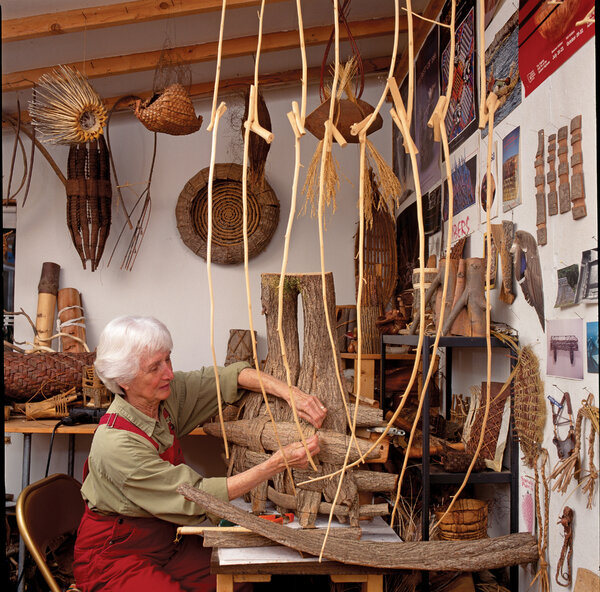 Ms. Barnes was also known for her raised drawings in bark, known as “dendroglyphs,” which she created by carving patterns into trees and returning years later to lift away what had formed in the scarred wood. She once waited 14 years to harvest one of her marked trees.

“She let the wood speak to her,” her daughter, Juliet Barnes, said. “She was inspired by what the bark was doing naturally, and then she would think of ways to manipulate it. It was an organic process. She was reverent and respectful of her materials.”

Ms. Barnes died on Nov. 23 at a hospital in Columbus. She was 93. The cause was complications of Covid-19, her daughter said.

Dorothy Ellen Gill was born on May, 30, 1927, in Strawberry Point, Iowa, the third of four sisters. Her father, Gorda, owned a furniture store and funeral parlor. Her mother, Dorothy (Moninger) Gill, was a homemaker.

As a girl, Dorothy found solace in nature. She liked studying the flow of rivers and streams. She collected stones of all sizes. With her youngest sister, she played in an asparagus bed in their backyard, hiding her toys beneath the dirt.

Ms. Barnes attended the University of Iowa in the 1940s and received both a B.A. and an M.A. in art education. While teaching at Parsons College in Fairfield, Iowa, she met a music teacher and composer named Marshall Barnes. They married in 1952, settled in Worthington, Ohio, and raised a family.

In her 40s, Ms. Barnes discovered the work of a basket maker named Dwight Stump, who used white oak wood, and she was captivated by the idea of harvesting materials from nature. She began making small nontraditional baskets before moving on to more large-scale work that incorporated wire, stone and glass. She collected wood across Ohio: shagbark hickory in Knox County, white pine in Athens, maidenhair fern stems in the Hocking Hills.

Ms. Barnes’s work is in permanent collections at the Museum of Arts and Design in New York and the Renwick Gallery of the Smithsonian American Art Museum in Washington. She taught extensively and hosted workshops at the Haystack Mountain School of Crafts in Maine and the Penland School of Craft in North Carolina.

In addition to her daughter, Ms. Barnes is survived by three sons, Ted, Gordon and David; a sister, Mary Teschner; five grandchildren; and three great-grandchildren. Her husband died in 2006.

Ms. Barnes’s final sculpture is currently growing underneath a small mulberry grove in her backyard.

When she planted the trees more than a decade ago, she buried square blocks nearby so that the roots would eventually grasp them and grow into some unfathomable form.

“They’re still there,” her daughter said. “Someday we’ll unearth it and find out what happened.”