‘Paul Keating’ eyeballs his audience and, in that familiar gruff tone, says, “Why am I here? I’ll tell you why I’m here. Let this evening be a reminder of what political leadership actually looks like”.

After that, there’s usually a spontaneous round of applause. Veteran satirist Jonathan Biggins, the man playing the former prime minister in his show The Gospel According to Paul, laps it up. Not just because every performer loves applause, but because it tells him something. 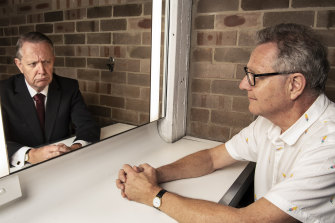 Actor and comedian Jonathan Biggins is bringing his The Gospel According to Paul Keating comedy to Melbourne.Credit:Wolter Peeters

“[Keating] reckons that you can rise above the static of the Twittersphere,” Biggins says. “He believes in big ideas and guiding lights.”

And Biggins’ audiences do, too. Or at least they want to believe, as they laugh along for 90 minutes in the theatrical dark. 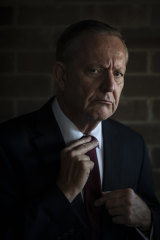 This month marks Gospel’s first visit to Melbourne but Biggins says plenty of politicians have seen the show. He’s done Keating for the Australian Labor Party caucus staff dinner and it went down well (though Wayne Swan buttonholed him later and complained, “Oh bloody Keating bombed us back into the Stone Age”). Amanda Vanstone came to one Sunday matinee.

And of course the subject himself has been in the audience.

“He came and saw it at the Opera House with Anne and the first thing he said [afterwards] was ‘Thankyou for being so generous’,” says Biggins. “But it’s completely unauthorised. It’s the first unauthorised autobiography.”

Biggins has been doing political satire since the surge in the form on TV in the 1980s, when he joined the great Patrick Cook , Phillip Scott and Geoff Kelso – fresh from their groundbreaking Gillies Report – on The Dingo Principle. It was only 10 episodes long but made a big impact, including a mock interview with Iranian leader Ayatollah Khomeini that resulted in two diplomats being expelled from Tehran.

But then-treasurer Keating didn’t feature much in the show, says Biggins. “I don’t think he felt like he does now. His legacy has grown over the years.”

Keating became a favourite character for Biggins at the long-running Wharf Revue series for the Sydney Theatre Company. One night, when a colleague dropped out with an injury, Biggins had to write a monologue in a hurry. He came up with the “let me remind you what political leadership looks like” theme (it was during Australia’s ‘revolving door’ prime ministerships) and “the audience just went nuts”.

“Love him or loathe him, people respect him. He was one of the last who were able to do what they said they were going to do.”

Biggins says he wanted to turn the idea into something more than a series of sketches, to “take on a greater dimension” and reach back into Keating’s early family life, his marriage and the death of his father. He read books on Keating, consulted his friend and Keating speechwriter Don Watson, and looked for insights into “how he thinks and what his term in office meant”.

“The greatest gift you have doing that character is that he was funny himself, he was acerbic. You can write putdowns and jokes and pepper them with his [own] as well.”

Biggins says the critically acclaimed 2005 musical Keating! was “a love poem to him, really, and we’re trying to avoid that” – so he touches on criticisms of Keating’s policies, hubris and haughtiness.

“But I think ultimately,” says Biggins, “he was pretty damn good, and compared to now he was extremely good.”

The show played for two sold-out weeks at the heart of former PM Tony Abbott’s old electorate, he says. “Love him or loathe him, people respect him. He was one of the last who were able to do what they said they were going to do.”

“When people are worried about what’s going to happen in the next five minutes… [when] no matter what you do you will be criticised within seconds… it’s impossible to have any nuanced argument.”

Does he think anyone will write a Gospel According to Scott Morrison?

“Well, I don’t know. But it would be a fairly short show.”

The Gospel According to Paul runs 11-23 May at the Arts Centre Melbourne.