When I learned that Catherine Zeta-Jones would be appearing on a website called TalkShopLive to launch a new product line under her Casa Zeta-Jones label, I was not sold. I loved watching Zeta-Jones ooze charisma across a movie screen, in Chicago, in High Fidelity, even in America’s Sweethearts. But recently I had mostly seen her featured in gross clickbait slideshows stuck to the bottoms of articles – the kind with dire headlines like “What happened to Catherine Zeta-Jones?” – and I wasn’t sure I wanted to know the answer.

Still, I swiped unthinkingly over to Instagram, where she had posted a video teasing to her appearance. Zeta-Jones materialised amid a seemingly endless kitchen arranged with voluptuous glassware and lit like a near-death experience. “Well, hello there,” she purred. 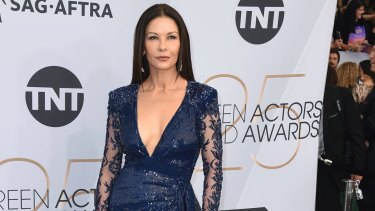 Catherine Zeta-Jones invites you into her world with Casa Zeta-Jones, a wide-ranging fashion, beauty and lifestyle brand. Credit:Jordan Strauss/AP

Zeta-Jones presented the mundane details of her advertorial livestream as if languidly ushering the viewer into a posh society event. “I shall be launching my very own Casa Zeta-Jones coffee line,” she said. “With you. Live. On my TalkShopLive channel. Monday, March the 22nd. Six o’clock Eastern Standard Time. So it will be coffee with Catherine. Chat. Coffee. Chat. A few mugs thrown in there.” She said this last part, about the mugs, with such a charmingly insouciant shrug that by the time she signed off – “Can’t wait to see you, cheers” – I felt, actually, happy for her.

My Casa Zeta-Jones emotional journey – from denial to depression and ultimately to acceptance – feels related to a wider mood shift around famous people selling things. There has always been a status hierarchy among celebrity brands, which chart somewhere on a reputational scale between the Air Jordan and the George Foreman Grill. But not too long ago, stars aligning their images with multivitamins or prepaid debit cards might have been eyed sceptically, their efforts coded as a cynical money grab (George Clooney for Nespresso) or a pitiful last resort (the Joan Rivers Classics Collection for American shopping channel QVC). When celebrities cashed in, they also risked diminishing their credibility as serious artists.

Now the opposite is true. Stars are respected for how much profit they can generate, even if the stuff they’re selling is inexpensive. This does not in any way compromise their mystique. That is how, over the past 15 years, the prevailing cultural interpretation of the Kardashians moved from dismissing them as idiot shills to regarding them as secret geniuses.

The celebrity endorsement is a three-way relationship connecting the star, the product and us, and the internet has worked to draw all of its participants closer and closer together. We’re all mingling on the same platforms, our photos pinned to the same timelines. Social media influencers have narrowed the distinction between celebrities’ claims to fame and their ability to exploit that through sales: Influencers’ notoriety is itself derived from their facility at moving product. And as rocketing startups made their CEOs famous, traditional stars from Ryan Reynolds to Rihanna have remade themselves as entrepreneurs. Today’s power move is not to land a contract as a celebrity spokesmodel, getting paid to get bossed around by some company, but to become the corporate boss yourself, seizing credit as a co-founder, co-owner, or creative director.

Regardless of the celebrities’ actual involvement in the creation of these products, the items nevertheless feel ever more entwined with the personas. They have not just passed through the stars’ manicured hands. They have sprung directly from their skulls.

This has all helped to usher in a golden age of celebrity branding. Today you can wear Kim Kardashian shapewear under Nicole Richie sleepwear on a Rita Ora duvet tossed with an Ellen DeGeneres pillow. You can raise your child on Jennifer Garner organic baby food and Jessica Alba organic cotton wipes and organic diapers with jaunty prints designed by Kristen Bell and Dax Shepard. You can shake up some drinks with Drake Champagne, Chainsmokers tequila, Post Malone rosé and cocktail mixers courtesy of Jax Taylor and Lance Bass, and then – in some parts of the US – roll Snoop Dogg cannabis in Wiz Khalifa papers and ash into a receptacle lovingly designed by Seth Rogen. And that’s not even counting the class of social media personalities, like Addison Rae, who have appeared to leap effortlessly from executing 15-second TikTok dance routines to alchemising fully articulated makeup lines.

Beneath these high-wattage deals, a certain hokeyness endures. TalkShopLive, Zeta-Jones’ e-commerce platform of choice, is the kind of website that will present a photo of a suspiciously white-toothed person, label it “Ken Lindner” and just assume that a) you know who that is and b) you might be moved to buy something from him. (Google advises: “Mario Lopez’s longtime agent.“) And yet since its 2018 inception, legitimate stars with product to move – like the memoir-slingers Matthew McConaughey and Dolly Parton – have peacefully coexisted with influencers calling themselves things like Nurse Georgie and the Gentlemen of Crypto.

Suggesting that there is some cynical calculation to these kinds of gambits is seen as an unsophisticated, even offensive, analysis. “I didn’t ‘sell out’ by making my dreams come true,” Chrissy Teigen said on Twitter last year when her honour was impugned over Cravings, her range of cookbooks and cookware synced with a branded Instagram account featuring cheese appreciation posts and a meme of Hulk Hogan wrestling a sourdough loaf. The internet rallied to Teigen’s defence.

When Zeta-Jones hit the virtual stage of TalkShopLive, I found myself unexpectedly delighted by her apparent ease in this new mode. She could not have appeared more earnestly enthused about the whole deal. Zeta-Jones delivered an hour-long parasocial monologue from her vast kitchenscape, spinning out vaguely coffee-related anecdotes. At one point she referred to her former self, wonderfully, as “ingénue me in gay Paree.” Fans filed into the chat rolling down the side of the screen – “Hi lovely Catherine,” “hi beautiful,” “hi from Vienna.” TalkShopLive emphasises the seamlessness of its sales technology, and when I clicked on the big red “BUY” button, the live feed of Zeta-Jones followed me into the virtual shopping aisle, so I barely needed to break eye contact with her as I typed in my credit card information.

Soon a bag of Ultimate Zeta Blend hit my doorstep. The handsome matte package described the beans as “full-bodied” with a “smooth, citrus-like finish.” The grounds percolated through my machine. I pulled the Casa Zeta Jones-branded mug to my lips. It tasted, at least, “citrus-like.” When the caffeine hit my bloodstream, Zeta-Jones had successfully transferred her aura directly into my brain.

I can’t confidently say that because Zeta-Jones herself sniffed these beans at some point on the production line, there was anything appreciably Zeta-Jonesy about the coffee, but I did know for sure that I had held up my end of the bargain: my money had made its way into her pocket.

Somewhere along the way, the promise of the celebrity endorsement had inverted. I didn’t buy the product because a celebrity supported it; I bought the product to support the celebrity. I wanted to like Catherine’s coffee so badly, and when I didn’t, I felt disappointed not in her but in myself. I felt, somehow, like I had let her down.