Who cares about the fate of Australia’s 243 known frog species?

Tens of thousands of us, apparently, if the 300,000-plus recordings of amphibians submitted by citizen scientists across the country using the Australian Museum’s FrogID phone application are any guide, creating one of the largest such databases in the world. 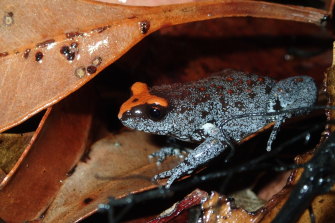 The red-crowned toadlet, found in the Sydney Basin, is already listed as vulnerable by the Commonwealth.Credit:Jodi Rowley

“They were prepared to stand out in the rain, in swamps, in the middle of the night, recording frogs,” said Jodi Rowley, a frog biologist at the museum, and an author of a new paper published on Tuesday in Global Change Biology. “It’s inspired. We’re not alone!”

Dr Rowley, who reckons she can identify all Australian frogs by their call– with a little help with map co-ordinates since some species sound alike – says the findings offered researchers a way “to eavesdrop on their love songs”. 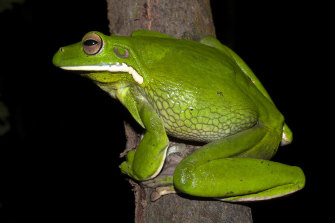 The white-lipped tree frog is one of the amphibian species that seems to cope with human disruptions so far. Credit:Jodi Rowley

By analysing more than 126,000 of those love songs submitted between November 2017 and the end of March 2020, researchers led by Gracie Liu at the University of NSW were able to infer which species were doing well relative to historic records of the species’ different ranges.

Thinning out the data to excludes species with fewer than 100 observations of the 20-60 second recordings, the scientists found more than 70 per cent of 87 species assessed were intolerant of human-modified habitats. Since about 40 of Australia’s 243 frog species are already threatened with extinction, that high proportion of sensitivity is alarming, researchers say.

“It’s not a positive outcome for those 70 per cent,” Ms Liu, a PhD candidate, and lead author of the paper, said. “The main point is that we try to prioritise keeping the landscape intact.”

Frogs are key bio-indicators, Ms Liu said, given their role between transformation from tadpoles in water to an often dryland existence as adults. Their sensitivity to temperature change and vulnerability to toxins also make they barometers of the living world around them.

“If our frogs decline, our environment and ecosystems aren’t healthy,” she said, adding, “frogs are already vulnerable across Australia and the world”, with the chytrid fungus adding to the threats. 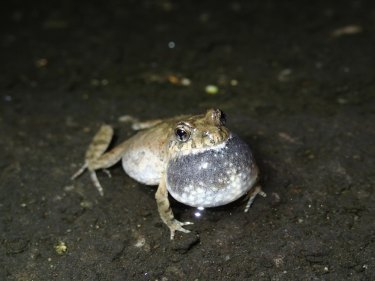 The bleating froglet was among the 70 per cent of frog species deemed to struggling with altered habit.Credit:Jodi Rowley

While species such as the crawling toadlet and bleating froglet struggle when humans move in, generalists such as the green-lipped tree frog and motorbike frog – named for the machine-like sound of its croak – tend to do better.

Ms Liu said other parts of her research, also likely to be published, will help point to the types of modifications that humans might be able to make to reduce the risk to biodiversity.

“What we think is pretty for humans is often not pretty for frogs,” she said. Leaving out leaf litter, for instance, can assist those frog species such as the red-crowned toadlet that lay their eggs on land. 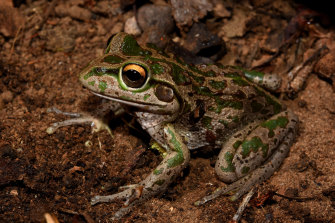 The motorbike frog, so known for the resemblance of its croaking to the two-wheelers, is also considered better able to survive in human-modified environments than most Australian frog species.Credit:Jodi Rowley

Dr Rowley, who says she has been obsessed with frogs since she was 18, is heartened by the public’s interest in those croaking males.

The estimate of 70 per cent of species not coping well with human disruption is likely to be “very conservative” since many are in very remote or limited locations. The critically endangered southern corroboree frog, for instance, did not feature in the submitted recordings.

The loss of frogs can have profound consequences since they reduce algae in streams and provide important food for many birds, mammals and other animals.

“It has huge consequences [if they are lost],” Dr Rowley said. “Nothing steps up to fill the role of frogs.”

Our Morning Edition newsletter is a curated guide to the most important and interesting stories, analysis and insights. Get it delivered to your inbox.