Viewers were left sobbing after a couple were given a second chance at their big day after they had to cancel their dream wedding amid the coronavirus pandemic in Hitched At Home.

In last night’s episode of the Channel 4 show, Louise Bromby, 33, and Patrick Ebbies, 35, who live in London, told how they originally destined for a big ‘festival-wedding’ for over 200 people in an orchard.

However, due to the global crisis, they decided to hand over all the planning to Fred Sirieix, who pulled out all the stops by working his magic to give the couple a virtual commitment ceremony they’ll never forget – including surprise celebrity appearances from the likes of comedian Russell Kane, Matt Lucas and TV presenter Davina McCall.

And there wasn’t a dry eye in the house for both teary groom Patrick – and those who tuned in to watch the virtual commitment ceremony at home.

‘I’ve cried loads. What a lovely, heart warming glimpse of light in what has been a very dark time for many,’ enthused one, while a second penned: ‘Hitched at Home is the lockdown content I need right now.’ 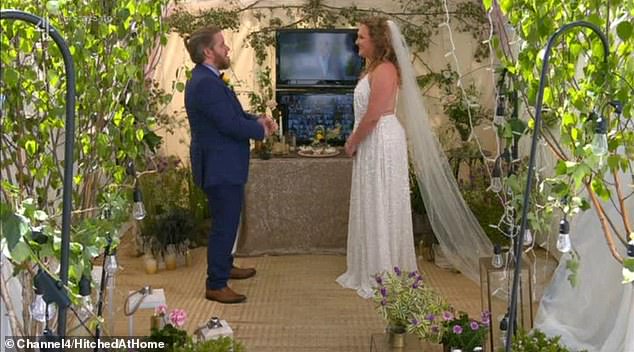 Louise Bromby, 33, and Patrick Ebbies, 35 (pictured together during the ceremony), who live in London, tied the knot in a virtual commitment ceremony amid lockdown in last night’s episode of Channel 4’s Hitched At Home

Taking to social media, one viewer wrote: ‘Hitched at Home is the lockdown content I need right now’ (pictured)

A third commented: ‘Hitched at home – omg fred. I’m not crying you are,’ while a fourth added: ”We cried absolutely buckets, what a beautiful show.’

Louise and Patrick, who met on Tinder, gave viewers a behind the scenes look as they planned their big day in just two weeks – but admitted there was a time where they thought all hope was lost.

‘I was so excited about it and for it to be taken away…it’s just a massive drop,’ explained Patrick.

Louise added: ‘Thinking about the logistics of it all, the emotion just floods in and that hasn’t happened until like in the last week to be honest for me. I just felt quite emotional about it.’ 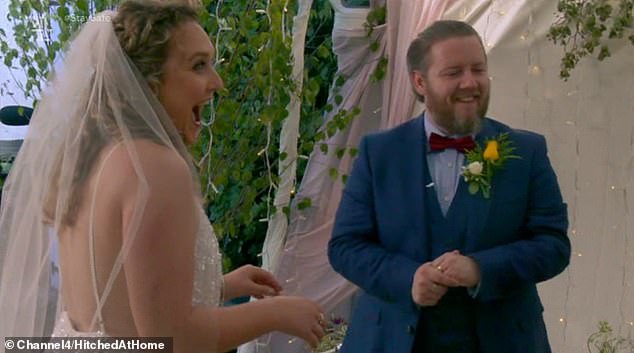 The happy couple were surprised by a whole host of famous faces throughout their virtual ceremony – including a special performance by Wet, Wet, Wet frontman Marti Pellow who recorded a version of Love Is All Around for the couple’s big day

In an emotional message, Davina McCall (pictured left) said: ‘Love conquers all. So I’m sending you both huge love and congratulations. Have a great day.’ 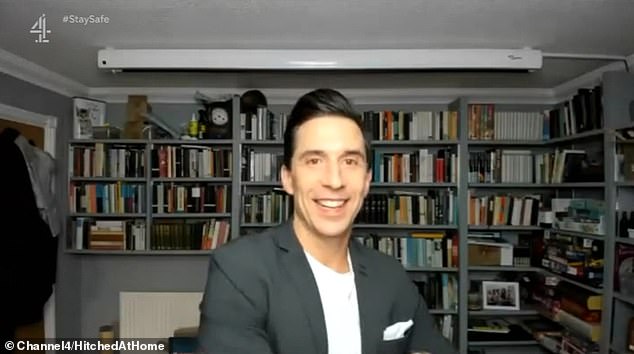 During the episode, Fred delved into his list of contacts and friends across the industry in a bid to lay on the best food, decorations, entertainment and surprise guests for the couple.

‘They had everything originally in place, but it all got taken away from them,’ he explained. ‘So, I’m working with some of my most trusted colleagues to throw the biggest bash we can in these circumstances.

‘I’m working my finger to the bone to organise plenty of surprises for Louise and Patrick and we’re going to make it a day they’ll never forget. I promise you, you will not want to miss it.’

And Fred didn’t disappoint – as comedian Russell Kane was seen gate crashing Patrick’s stag do before roasting his unsuspecting pals via Zoom, and the couple were treated to a gourmet meal by celebrity chef, Michel Roux Jr. 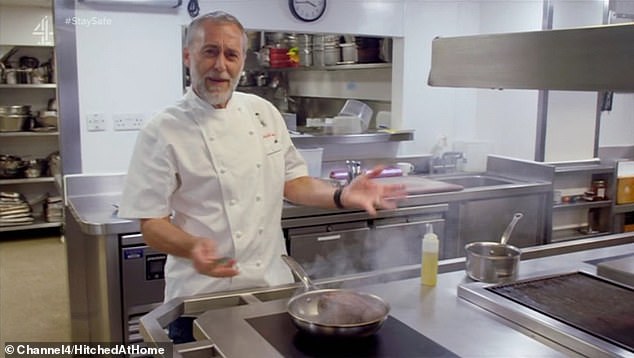 The couple were treated to a gourmet meal from celebrity chef, Michel Roux Jr (pictured)  – which included beef wellington 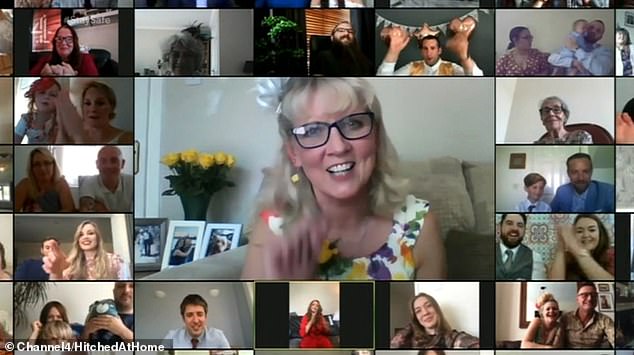 Meanwhile, Wet, Wet, Wet frontman Marti Pellow recorded a version of Love Is All Around for the couple’s big day, while Davina McCall delivered a heartfelt message and said: ‘Love conquers all. So I’m sending you both huge love and congratulations. Have a great day.’

Matt Lucas also made an appearance, while Craig Revel-Horwood did a dance and newsreader Jon Snow signed off.

Taking to social media, those who tuned in were delighted that the happy couple finally got their big day – albeit it a little different from what they planned.

‘Loved hitched at home made me laugh and cry in equal measures,’ wrote one, while a second commented: ‘God, I loved #HitchedAtHome – if you like crying, you’ll love this.’

A third wrote: ‘OH WOW!!! I am literally crying like a baby!!! Congratulations to Patrick & Louise on your beautiful #LockdownWedding,’ while a fourth agreed: Haven’t stopped crying. How beautiful was that!’ 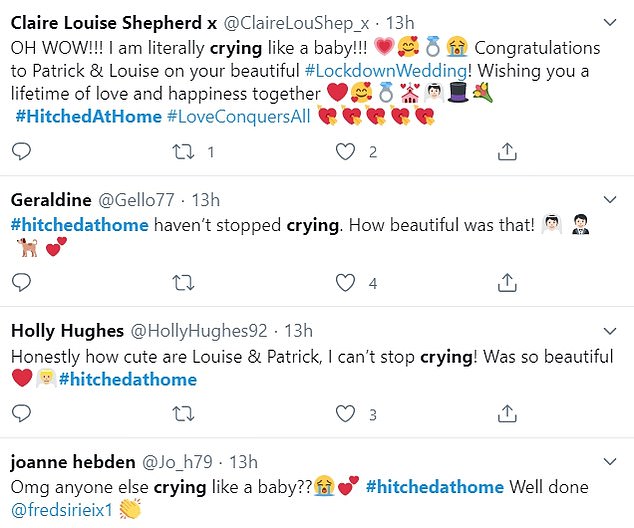 Another who tuned to the show penned: ‘Anyone else just blubbed their eyes out?’ (pictured)