HENRY DEEDES: Boris Johnson is a man still adjusting to life after a terrifying brush with death’s pale rider

He emerged hesitantly, tiptoeing gently down the steps of Downing Street like a winter swimmer wading into the icy foam. Gone was the rhinoceros charge we are used to seeing flying out of that famous black door, that head-first, shoulders-down barge, which he would throw himself into with the same boundless energy he uses to attack life.

Instead, first impressions of Boris Johnson as he faced the nation for the first time in a fortnight were of a man still adjusting to life after his terrifying brush with death’s pale rider. Such softly-softly cautiousness was also reflected in what he had to say. This was more a pep talk than a plan of action. He was clear that he would not be hounded into ending the lockdown just yet. 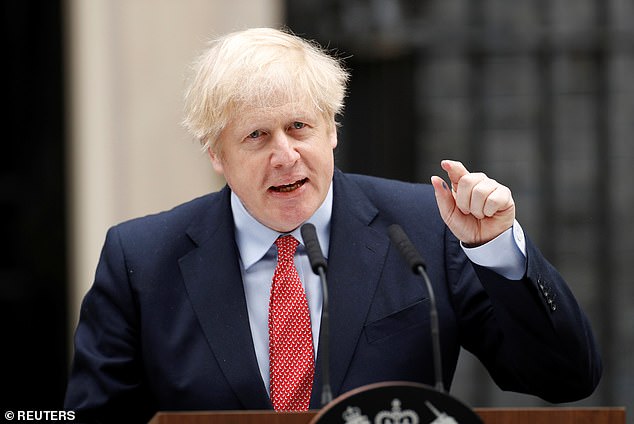 ‘Bear with me’ was the general tone. ‘We’re making progress but there’s a while to go yet.’ None of this should have come as much of a surprise. After all, here was someone who has felt the icy grip of this pernicious disease, which left him face down in an intensive care unit with doctors pumping oxygen into his struggling lungs.

It is almost impossible to conceive such an ordeal wouldn’t make him think twice about sending people back to work while the death toll still flourishes. There could be no doubt, though, that the PM looked in far better fettle since we last saw him. During his Easter Day message, in which he gave thanks to the nurses who saved his life, he bore the sepulchral appearance of a man who been passed through a wringer.

Yesterday, a flush of rouge finally returned to those pasty cheeks. His eyes, which in that emotional last video had glistened with fear, had rediscovered a bit of their old twinkle. For the first time in weeks, we saw flashes of that daft, Honey Monster smile. First up came an apology.

‘I’m sorry I’ve been away from my desk longer than I’d have liked,’ he said with theatrical understatement.

Here was an immediate reminder of what we’d been missing these past weeks – a Prime Minister who can raise a smile amid the horror. Even the plod guarding the No 10 doorway gave a little smirk. A mid the familiar arm waving and thumb jabbing which followed, there came plenty of headmasterly encouragement. 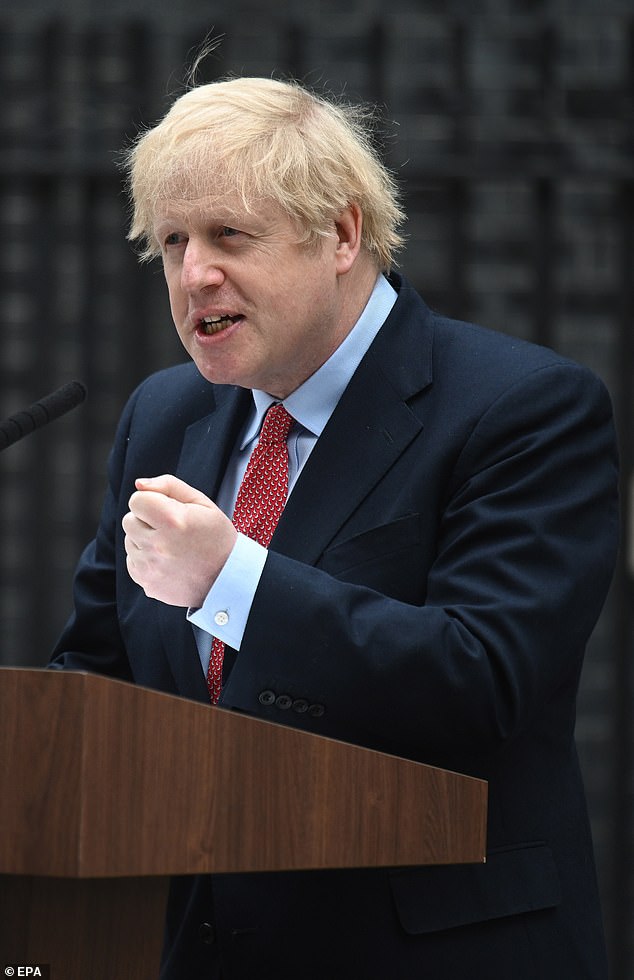 Boris thanked the nation for the ‘grit and guts’ they had shown during the lockdown. Our sense of national resolve had left us ‘on the brink’ of achieving our ‘first mission’ in helping the NHS to keep functioning. Had that really been the public’s ‘mission’?

Most of us have simply been doing as instructed this past month. But Boris loves a bit of military speak. Later, he spoke of ‘turning the tide’ and ‘pressing home the advantage’. There was little here which we had not heard from ministers in his absence.

We got the usual stuff about not wanting all our hard work go to waste now by ending the lockdown too early. But Boris’s delivery always gives that extra lift, that gentle squeeze of the cheeks which insists all will come rosy in the end. For all Dominic Raab’s delicate handling of the crisis in his absence, the Foreign Secretary will never be a deliverer of eve-ofthe-battle speeches.

We heard the coronavirus being compared to ‘a physical assailant, an unexpected, invisible mugger’ which needed ‘wrestling to the ground’. There was a noticeable wince as he said this. Is it possible the PM is still feeling a few aftershocks of his illness? His voice was more wispy than usual.

At times, he appeared slightly breathless when he finished his sentences. It does seem to linger, this ruddy thing. Five weeks since my own (mercifully) brief encounter with it, there remains an irritating croak in my voice. We were near the end of ‘phase one’ of this crisis, said Boris, but it was vital everyone kept their patience.

He insisted he was all too aware of the frustrations the country was experiencing. ‘I know how hard and how stressful it has been to give up, even temporarily, those ancient and basic freedoms, not seeing friends, not seeing loved ones,’ he said. As he spoke, I couldn’t help notice the children’s drawings in the windows behind him sending messages of support to the NHS. 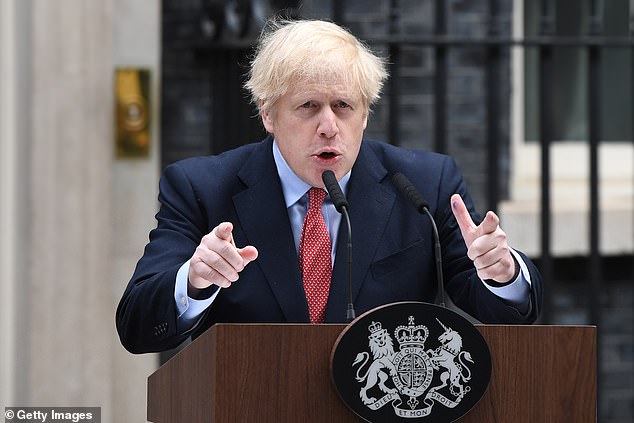 Prime Minister Boris Johnson speaks in Downing Street as he returns to work following his recovery from Covid-19 on April 27, 2020 in London, England

Usually this sort of thing looks gooey but it seemed oddly touching with a new tot about to arrive in Downing Street. To business owners, whom he praised as the ‘wealth creators’ of the UK economy, the PM was particularly apologetic. ‘I understand your impatience, I understand your anxiety,’ he said.

Was this a message to UK plc that he had not lost his nerve? Some have wondered whether the PM would be scarred by his recent hospitalisation, making him more hesitant to lift the lockdown. There was a pledge to bring opposition parties into the tent. Whether this meant he would involve them in decision making or simply keep them in the loop on government decisions wasn’t clear.

So far, Sir Keir Starmer has preferred to keep his distance, but things may start to get awkward for him if Boris insists on getting him involved. The pair’s first meeting at PMQs tomorrow should be interesting. The Prime Minister ended by calling on the country to summon the spirit of fundraising hero Captain Tom Moore.

If we could all show some of the old boy’s gumption, said Boris, he was sure the UK would emerge from this crisis stronger than ever before. And with that one, he offered one last grin of defiance before turning to embark once again on the most important week of his life. Not quite the speech to stir the juices, but it felt good to have him back all the same.