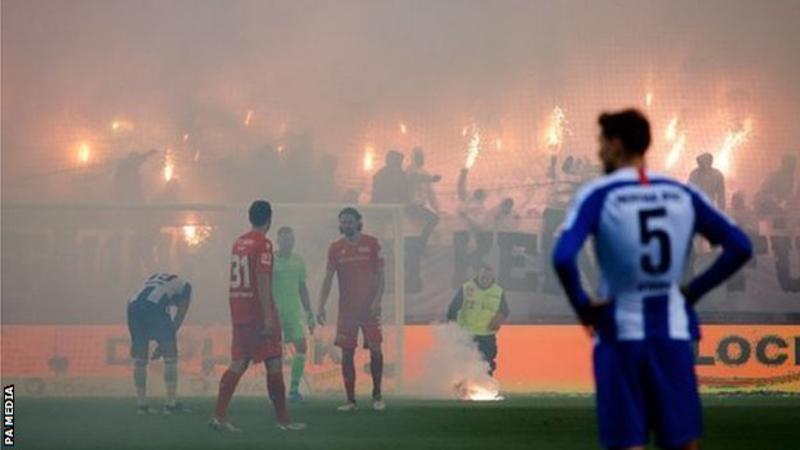 There could not be a bigger contrast between the first two Bundesliga derbies between teams from east and west Berlin.

November’s maiden meeting saw a winning goal for Union Berlin in 10 minutes of time added on after raucous fans threw flares on to the pitch.

Friday’s return game with Hertha Berlin at the Olympic Stadium will be behind closed doors because of the coronavirus pandemic.

“We all remember the match in November. It was a black, black day. Now we’ve got the chance to put it behind us just a bit,” said Hertha’s general manager Michael Preetz.

“The conditions are very different, therefore it’s a different sort of derby,” added new Hertha coach Bruno Labbadia – who began his reign with a win at Hoffenheim last Saturday.

Union coach Urs Fischer missed the 2-0 loss at home to Bayern Munich last weekend after breaking the team quarantine following a family bereavement, but he’ll be back in the dugout.

“Even though the conditions are unusual, I’m looking forward to Friday,” he said.

“In the end, it’s a derby. It’s a special game with lots of emotions. I’m sure I don’t need to do much to get the players up for Friday.

“For me, the first and main goal is our overall goal – that is staying in the Bundesliga. We want to stay in the league with all our might, a victory against Hertha would help us a lot to reach this goal.”

Union, the first club from east Berlin to reach the Bundesliga, are 12th – seven points above the relegation play-off place. Hertha are one place and one point higher.