A woman searching for new meals to make in isolation has discovered a simple way to bake ‘pull-apart’ bread, using a cob loaf, crushed garlic, cheese and some thinly sliced ham.

Alexa Kelly posted photos of her creation in a Facebook cookery group on Tuesday, showing others how to make their own version of the popular sharing bread, which is crossed with deep indents that allow the crust to be separated into individual chunks.

The amateur chef from New South Wales gently sliced into a cob loaf without cutting through to the bottom and smothered the bread with olive oil, crushed garlic and salt, allowing the mixture to drip into the cracks.

She lined inside with strips of mozzarella and ham before scattering finely chopped parsley and shallots over the top and baking in the oven at 180C for roughly 25 minutes. 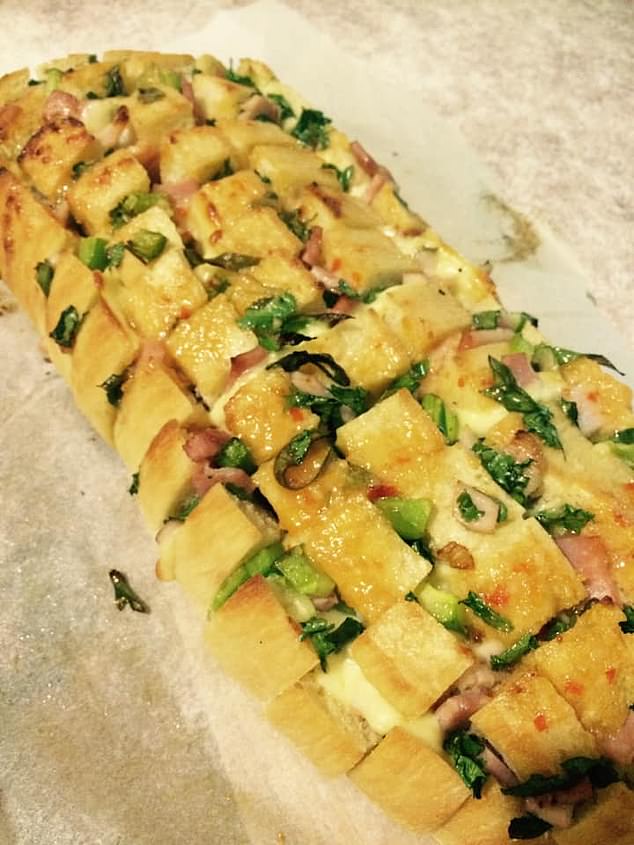 The simple pull-apart bread made by New South Wales woman Alexa Kelly, who discovered how to bake her own using a cob loaf, crushed garlic, cheese and some thinly sliced ham

– One tablespoon of salt

– One pack of ham slices

– A pinch of parsley

Before filling the loaf, Ms Kelly preheated her oven to 180C and lined a baking tray with grease-proof paper.

She carefully cut into the bread, marking sections close together to create small, bite-sized chunks.

Take care not to cut through the bread, leaving the bottom intact to act as a base.

She crushed four cloves of garlic into a pulp and mixed it together with three dessert spoons of olive oil and a tablespoon of salt. The mixture should form into a thick paste.

Using a spoon, she drizzled garlic oil over the bread, running the spoon down through every crack to ensure it spreads evenly.

She sliced a block of mozzarella into thin slivers, lining them along each segment of the loaf before stuffing ham in too.

She finely chopped a quarter of a cup of shallots and a handful of parsley and scattered it over the top for decoration, before sealing the bread with more olive oil and oven baking for between 20 and 25 minutes, until the cheese has fully melted to a crisp, golden brown.

Her quick and easy recipe has been liked by more than 500 Australians in less than 24 hours.

One woman said she had joined dozens of Facebook cookery groups to find fun recipes to try in isolation, but now regrets it because of dishes like Ms Kelly’s bread.

‘Oh God this group is making me fat,’ she said.

Many thanked her for sharing such a simple yet delicious snack which is sure to delight children during lockdown.