As a millennial, I am one of the people whose Starbucks drinks purchasing habit has been thwarted amid quarantine, so of course I can now afford to own on a modest condo in an attractive metropolitan area.

But I have learned how to make sweet, sweet chain coffee drinks at home.

There are two kinds of people at home during quarantine—people like my sister, who in the last 24 hours has baked two loaves of bread, tried a new martini recipe, roasted artichokes, and sieved homemade ricotta through a cheesecloth. And there are people like me—I have toasted four pieces of toast.

But after I developed a religious commitment to making the trendy, very easy, very fluffy dalgona coffee, I suddenly feel like a cross between a homesteader and a food scientist. I do not have the temperament to see a focaccia recipe through, but I can and will mix sugar and coffee together to produce something that looks nice on Instagram. Making Starbucks drinks is one of the most rewarding activities possible for people in group two: it essentially involves dumping things into a cup and feeling productive.

There is a lot of information online about how to make Starbucks drinks at home. I don't know how to break this to you, but Starbucks is popular. Wanting to make the most authentic (well, authentic to the giant chain) drinks possible, I scrolled Reddit forums, read food blogs, watched YouTube videos from Starbucks baristas, and tested recipes in my kitchen.

The biggest takeaway: Starbucks drinks (okay, Starbucks-adjacent drinks) are easy to make. Everything that's in a typical drink—coffee, milk, sugar, basic flavoring—is already in your house. You need very little special equipment. You can make anything dairy-free or low-sugar, and you can swirl on as much caramel as you want.

And let's be honest, even if you use instant coffee, will it really taste that different from actual Starbucks coffee? And I say this as someone who has cheerfully traded roughly seven American dollars for one Starbucks drink more than once in my life.

Simple syrup: Most sweet Starbucks drinks call for simple syrup. Sugar crystals or stevia won't mix in the drink the same—they sink to the bottom of the drink, and that's a bummer. Simple syrup is very true to its name—one cup of sugar and one cup of water on the stove for a few minutes, add a tablespoon of vanilla extract for flavor—now you have enough simple sugar to last a month. If you're not interested in anything involving a stove (fair!) you can make no-cook simple syrup according to this recipe from Food52. If you are exhausted by the idea of stirring anything (also fair!) you can just buy pre-made syrup in almost any store. You can even buy the exact syrup Starbucks uses.

Bonus: lots of cocktails call for simple syrup. Now you are prepped and ready for 24 hours of beverages.

Caramel: These are tough times. May I suggest that you make a vat of caramel sauce in under five minutes on your stove? I did this because it was fun and made me feel like Laura Ingalls Wilder, but you can also just buy a bottle of caramel. I used this Food Network recipe, but I undercooked it a little to mimic the golden Starbucks topping color. I also added extra salt, to bring out the flavor, and to feel like my caramel is gently slapping me in the face.

Homemade Whipped Cream for all of your Easter desserts tomorrow! You only need 2 ingredients and 5 minutes 🙌🏻⁣ .⁣ Tap the link in my bio for the recipe -> @bellyfullblog⁣ .⁣ #whippedcream #homemadewhippedcream #heavycream #easydessert #dessertrecipe #easyrecipe #homemadeisbest #eatdessertfirst

Whipped cream: The Starbucks drinks that are the most like cake and the least like coffee are crowned with whipped cream. I whipped cream at home (using an electric mixer on half a cup of heavy whipping cream until it looked cute, about two minutes) but I only did this because quarantine has caused the concept of time to collapse for me. You can absolutely just pick up a can of your favorite whipped cream on your next grocery run.

Coffee: Most Starbucks drinks are espresso-based. If you have an espresso maker—wow, good for you! We are all so impressed with your wealth and preparedness for this crisis. For the rest of us, the best thing to do is to either use instant coffee. Most guides estimate that 2.5 tablespoons of instant coffee is equal to about one tablespoon of espresso. Or, you can make about a third of a cup of very strong coffee and use that in place of a shot of espresso.

To make iced drinks, do not just make coffee and then pour it over ice. This will become watery coffee. According to an anonymous "Buyer's Guide" written by a Starbucks barista for Consumer Reports, Starbucks brews iced coffee at double strength so that it still tastes good when ice melts into it, while your home iced coffee tastes weak and watery. You can brew stronger coffee, or use espresso. Or, you can make coffee ice cubes (by freezing coffee in an ice-cube tray), and feel like a genius. 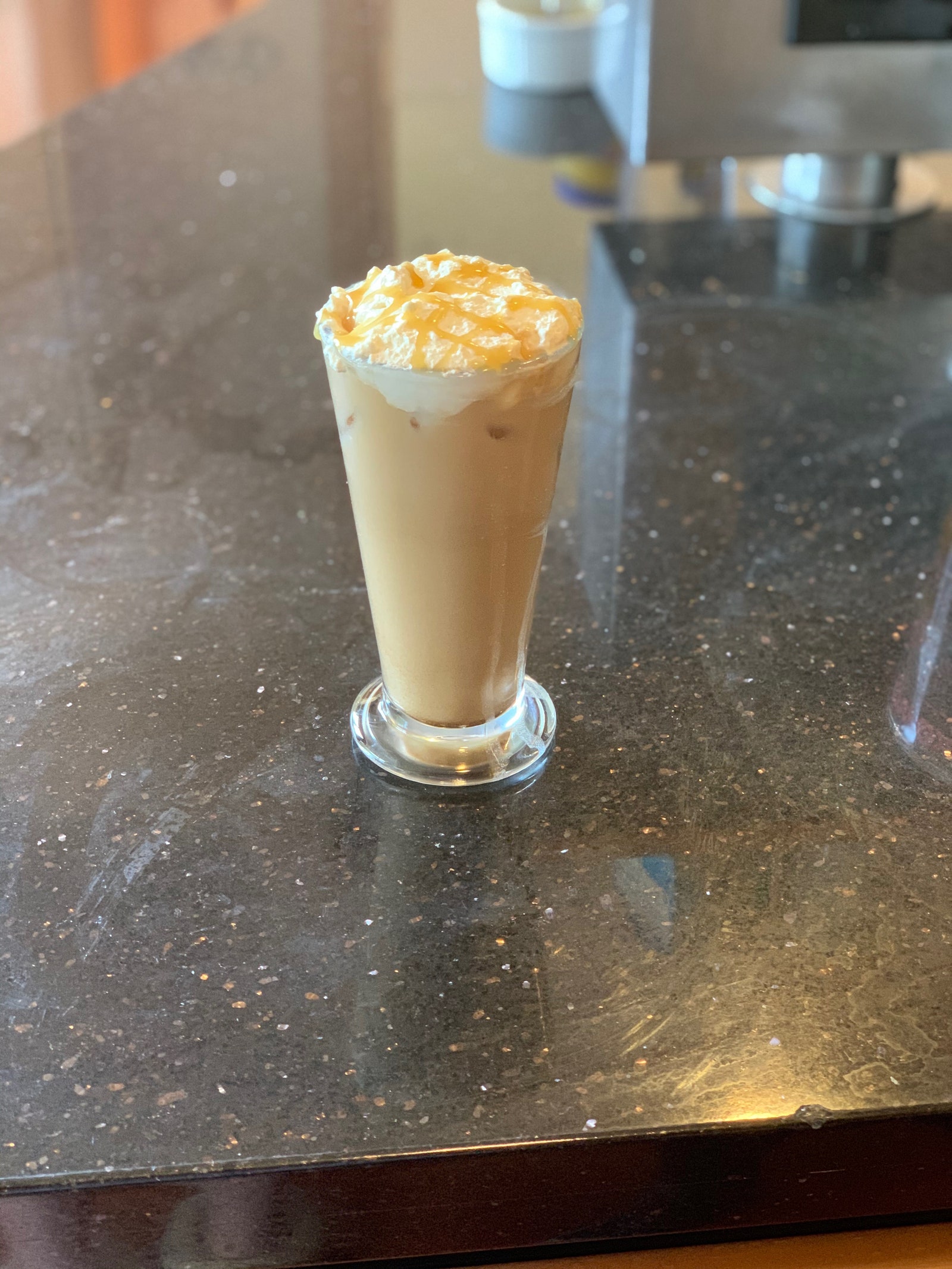 To make a caramel macchiato

I thought a macchiato would be hard to make because it is hard to spell. Incorrect. This Reddit cheat sheet explains that caramel macchiatos call for vanilla simple syrup, not caramel syrup. I followed this recipe from Eugenie Kitchen, but I stirred extra caramel into the drink to make it taste extra Starbucks-y. Per a former Starbucks barista, the proper way to top a macchiato is with seven cross-hatchings of caramel in each direction, followed by two circles around the rim. To make the caramel flow onto the drink I reheated it in the microwave and dripped it off the end of a spoon.

To make a latte or mocha

According to multiple sources on Reddit (thanks, Reddit), Starbucks hot drinks follow a set ratio. For shots, the ratio is 1:2:2, that is tall drinks get one shot, grandes get two, and ventis get two as well. For pumps of syrup, the ratio is 3:4:5, so three pumps for tall drinks, four for grandes, and five for ventis. Americano shot ratios are 2:3:4. To get the exact espresso-to-milk ratio that Starbucks uses, keep in mind that tall drinks are 12 ounces, grande drinks are 16, venti hot drinks are 20, and venti cold drinks are 24. You can foam milk at home in seconds— heating it at a low temperature on the stove and using an electric mixer or vigorously whisking it. 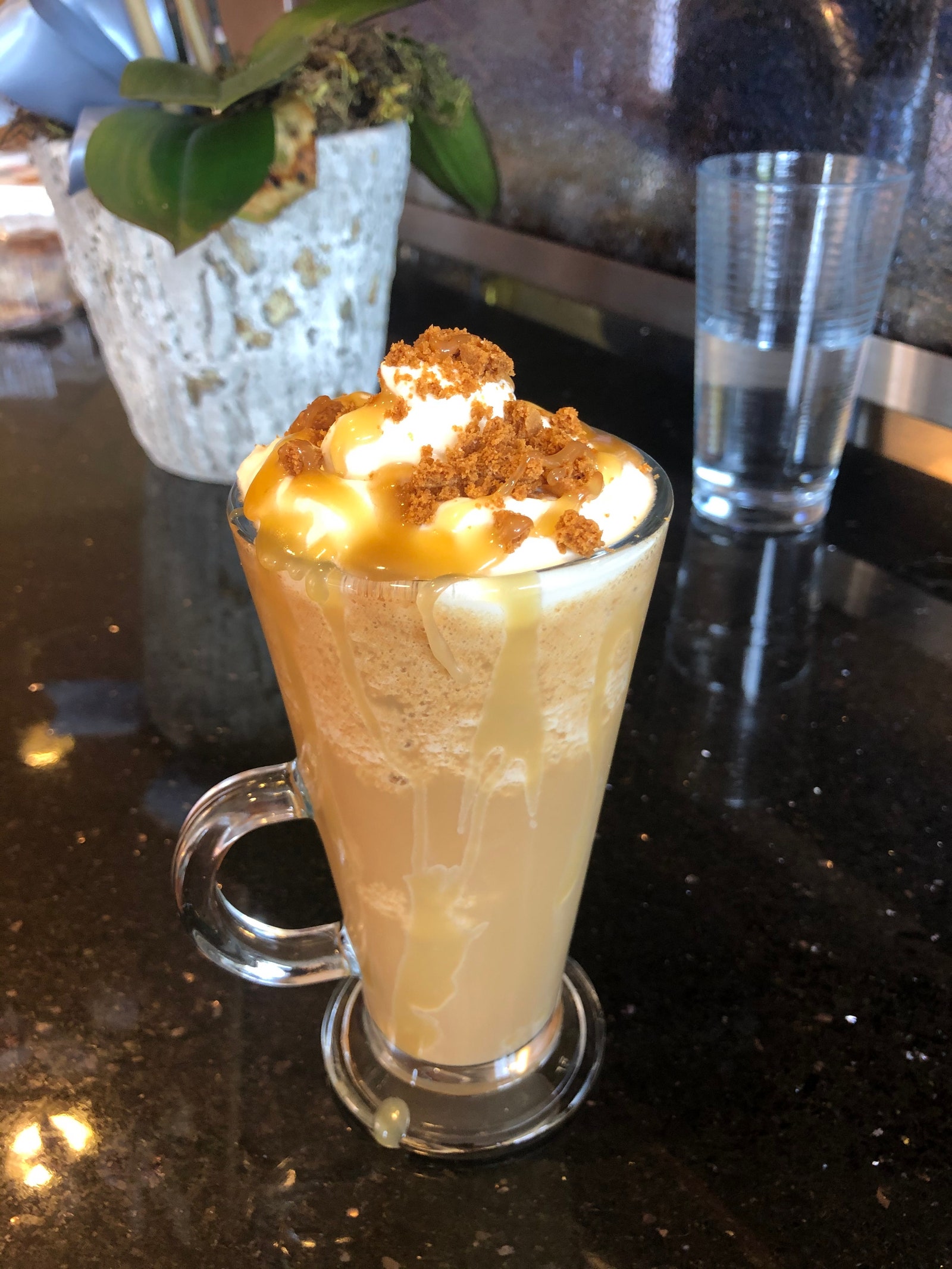 To make a Frappuccino

The quintessential beverage of popular middle school girls can be made easily in your very own home. Most frappuccino recipes call for ice, coffee, and flavoring. If you follow that recipe, your frappuccino will be weirdly soupy. Starbucks uses a thickening agent, which holds the frapp together. A former barista recommended xanthan gum (sounds very food-science-y, but it's actually sold in a lot of baking aisles), but I used cornstarch, which is also a thickening agent, and it worked out fine. I used the All Recipes Caramel Frappuccino recipe, but with coffee ice cubes and a quarter teaspoon of cornstarch. I also dripped caramel in the cup before I poured in the drink. And then, feeling truly invincible, I blended three Biscoff cookies into the drink, and topped it with whipped cream and crushed cookies. I'm a woman, hear me roar.

Don't try this at home

To make a Starbucks Refresher

Let's be real, here. The delightfully technicolor Starbucks Refresher Iced Beverages and Pink Drinks contain ingredients like "Rebaudioside A" and "Tricalcium Phosphate." Sure, Starbucks drinks in general contain preservatives and unusual flavor enhancers, but the Refreshers really depend on those elements for their signature taste. For this reason, replicating these drinks in your kitchen is pretty much impossible. This Copycat Starbucks Cool Lime Refresher recipe from Simplistically Living tastes nothing like a Starbucks Refresher, but it is delicious, easy to make, and definitely refreshing.

A post shared by Floating Dutchman Rum (@floatingdutchmanrum) on Apr 6, 2020 at 8:29am PDT

This is deeply upsetting for anyone who has spent as much money on iced chai lattes as I have (the figure must be somewhere in the millions), but all iced chai lattes made in coffee shops are just liquid chai tea concentrate and milk, poured over ice. It does not matter if you are at a trendy indie coffee shop or in an airport: I promise you they are pouring chai tea concentrate out of a carton. I believe that Starbucks uses the Tazo Chai Tea Concentrate; I prefer the Oregon chai concentrate. But either way, an entire box of concentrate costs less than a tall chai latte at Starbucks and takes 30 seconds to turn into a fancy lady drink. Add milk and a little vanilla simple syrup if you really want that Starbucks sticky-sweet flavor, and curse your foolish self.

If you want to take it to the next level, throw in a shot of spiced rum or bourbon. Can't get that at Starbucks.