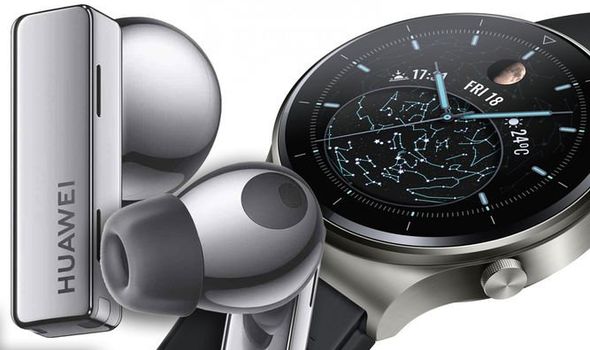 It’s been a busy morning for Huawei with the Chinese tech firm announcing a swathe of new devices. Along with two refreshed laptops – called the MateBook X and MateBook 14 – there’s also some new noise-cancelling headphones and a smartwatch arriving in UK stores very soon.

Huawei’s latest earbuds, called the FreeBuds Pro, feature a design that’s not all that different from Apple’s AirPods Pro and, like Apple, they also aim to block out all of the background sound around you.

Numerous earbuds now feature ANC but Huawei is boasting that its technology is better as its noise cancellation is fully dynamic.

That basically means it can adapt and change based on your environment and that’s not all as the FreeBuds Pro can also block sound up to 40dB which is a tiny bit better than what Apple’s AirPods Pro can muster.

Other extras include an immersive sound experience, voice enhancement mode and a total of 30 hours of music playback via their charging case.

Like the AirPods Pro, there’s also three tips that come in the box and the Huawei app can help make sure you have the correct one fitted for your ears via a sound test.

There’s no word on a full UK price or release for the FreeBuds Pro but more details should be announced soon.

If it’s a new smartwatch you fancy strapped to your wrist then Huawei has that covered as well with the launch of its new Watch GT2 Pro.

This wearable looks very much like a real timepiece with Huawei slimming down the bezels around the OLED display and creating the case from stainless steel.

Easily interchangeable straps will make it simple to switch from leather to plastic so you can wear it work then change things up for a trip to the gym. There’s also a premium Saphire Glass Surface for improved durability and Huawei reckons you can get two weeks usage out of a single charge.

Of course, this is a smartwatch so there’s a bunch of fitness features such as heart and sleep tracking.

The Watch GT2 Pro also has over 100 workout modes and can even track your next skiing trip or how good, or bad, your golf swing is.

One final feature worth mentioning is a mode that monitors where you have walked and then reveals a route back which could be perfect if you enjoy the great outdoors and a bit of hiking.

Again, there’s no word on a full UK price or release for the Watch GT2 Pro but more details should be announced soon.