There would be four TIMES as many flightless bird species if not for hunting and other human influences that drove more than 100 groups to extinction over 126,000 years, study reveals

There are 60 species of flightless birds walking the Earth today, but a new study reveals there would be at least four times the amount if not for human influences.

These findings were uncovered by a team at the University College of London who compiled a list of every bird species known to have gone extinct since humans appeared on the planet.

A total of 581 bird species have vanished since the Late Pleistocene, 126,000 years ago, and 166 of them lacked the ability to fly.

The study determined that flightless birds thrived on most island groups around the world, with particular hotspots in New Zealand and Hawaii.

Researchers also determined that flightless birds were more likely to go extinct than those that flew, as they were an easy kill for humans.

There 60 species of flightless birds walking the Earth today, but a new study reveals there would be at least four times the amount if not for human influences. This pictures shows a group of Moari that went extinct due to humans hunting them

‘This can distort evolutionary patterns, especially if the characteristics being studied, such as flightlessness in birds, make species more vulnerable to extinction. We get a biased picture of how evolution really happens.’

For the study, the team created a long list of every known bird that has lived and went extinct over the past 126,000 years.

Then the sifted through each one, calculating how many of them were unable to soar through the sky. 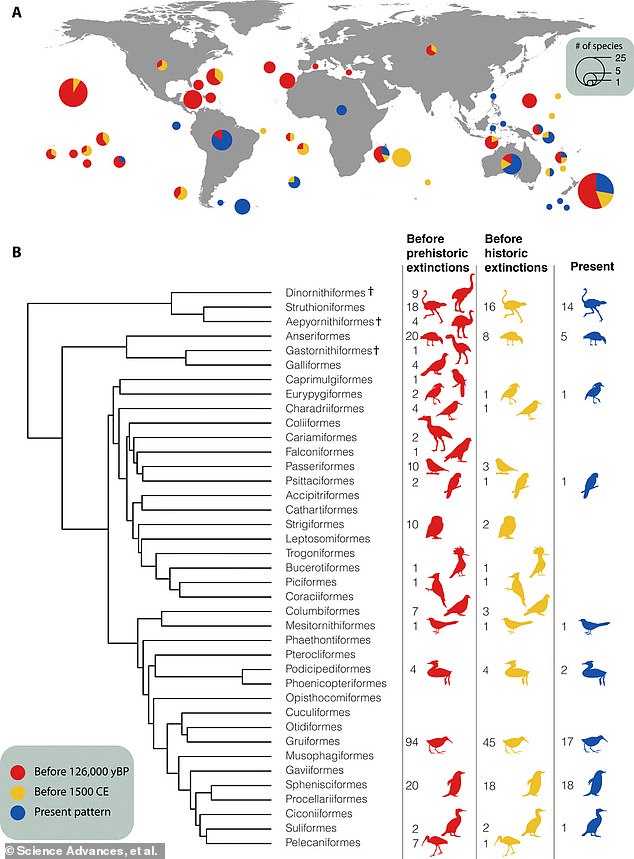 For the study, the team created a long list of every known bird that has lived and went extinct over the past 126,000 years. Then the sifted through each one, calculating how many of them were unable to soar through the sky

From the 581 bird species, the team narrowed down the flightless to 166 – all of which may have still been roaming the Earth if not for humans.

Birds that cannot fly were much more diverse than previous studies had assumed, the study shows.

The findings also confirm that flightless species were also much more likely to go extinct than species that could fly.

Co-author Professor Tim Blackburn (UCL Center for Biodiversity & Environment Research and the Institute of Zoology, ZSL) said: ‘Many bird species can become flightless in environments without their usual predators, for example on islands.’

‘Flying expends a lot of energy that birds can use for other purposes if they don’t need to take to the air. Unfortunately, though, this makes them easier prey if humans—and their associated rats and cats—suddenly turn up. 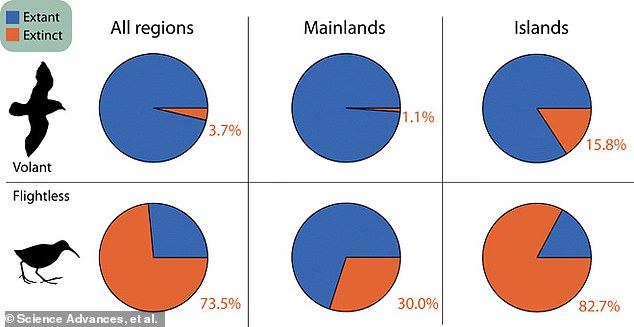 Birds that cannot fly were much more diverse than previous studies had assumed, the study shows. The findings also confirm that flightless species were also much more likely to go extinct than species that could fly

‘Extinction has all too often been the result, and is likely to continue as flightless birds are overrepresented, compared to avian species, on global lists of animals under threat.’

The researchers report that most island groups worldwide had flightless birds before humans arrived, occupying ecological niches that otherwise would have been filled by mammals, with particular hotspots in New Zealand (26 species such as the extinct moa) and Hawaii (23 species, all of which are extinct, such as the flightless goose).

Adding extinct birds to the global picture of bird diversity reveals that flightlessness evolved in birds at least four times as often as we would expect if we only looked at living birds.

Dr. Sayol said: ‘Our study shows that the evolution of flightlessness in birds is a widespread phenomenon.

‘Today, most flightless species are penguins, rails or ostriches and their relatives.’

‘Now, only 12 bird families have flightless species, but before humans caused extinctions, the number was at least 40.’

‘Without those extinctions we would be sharing the planet with flightless owls, woodpeckers and ibises, but all of these have now sadly disappeared.’

WHAT SPECIES ARE SCIENTISTS WORKING TO BRING OUT OF EXTINCTION?

De-extinction, or the process of bringing vanished species back to life, is becoming more and more common among researchers.

Cloning is the most common form of de-extinction, but scientists can also slip ancient DNA sequences into the eggs of live species.

Harvard researchers believe they may be able to bring the little bush moa back from extinction using this method.

Scientists are also close to bringing the dodo out of extinction. 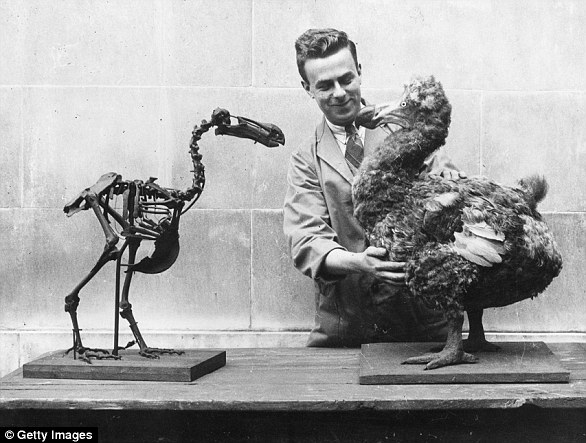 A scientist holds up a reconstructed model of the dodo (right) next to a skeleton of the extinct bird in 1938. The flightless bird went extinct in the late 1600s

The dodo is a flightless bird that went extinct from Mauritius, an island east of Madagascar, in the late 1600s.

Aside from the dodo, scientists are also trying to revive the passenger pigeon, a wild pigeon that went extinct in the early 1900s.

The passenger pigeon primarily resided in North America, primarily around the Great Lakes.

Scientists have also reconstructed the genome of the Tasmanian tiger, which is native to Australia, Tasmania and New Guinea.

It’s believed to have gone extinct in the 20th century and is known for its striped lower back.

Related posts:
TV and Movies
Alan Titchmarsh addresses interviewing ‘difficult’ guests on show: ‘They’re not easy!’
Is Bling Empire real? Is Bling Empire scripted?
The 4 Best Seasons of 'American Horror Story' To Watch if You Loved 'Ratched'
The Real Reason Joe Left Blue’s Clues – Nicki Swift
'Coming 2 America' Stars Leslie Jones and Luenell Were Feuding for Years Before the Movie Wrapped
Recent Posts
This website uses cookies to improve your user experience and to provide you with advertisements that are relevant to your interests. By continuing to browse the site you are agreeing to our use of cookies.Ok