There is a moment early on in Raised by Refugees, a new and endearing autobiographical series created by Kiwi comic Pax Assadi, that would qualify as heartbreaking if it weren’t so funny.

It’s September 2001, and the repercussions of the 9/11 attacks are being felt in every corner of the globe, including suburban Auckland. A 12-year-old Pax (played by first-time actor Kenus Binu) is recreating a scene from his favourite movie, Bad Boys, with his younger brother, morphing their hands into finger guns. 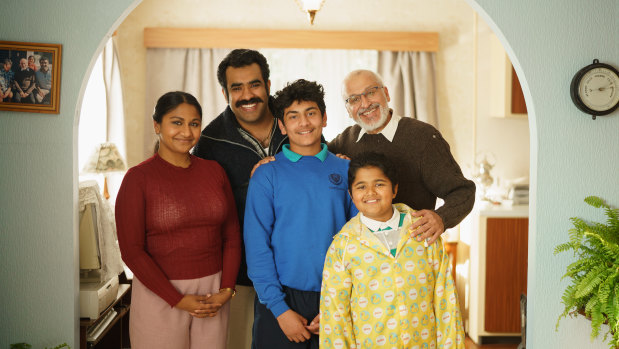 Pax Assadi (second from the left) turned the experiences of his childhood into the semi-autobiographical comedy series, Raised by Refugees.Credit:Matt Klitscher

Their mother, Safia (Kalyani Nagarajan), quickly shuts down the game. She warns that in the aftermath of 9/11, half-Pakistani, half-Iranian children playing with guns (even ones made of fingers) is not a good look.

It’s a sobering scene but undercut with instant levity when Safia hilariously confiscates the weapons.

“Give them to me,” she demands before holstering her hands in her pockets.

This exchange, like so much of Raised by Refugees (available on Stan*), is pulled loosely from Assadi’s real life.

In reality, the comedian was 10 years old when 9/11 changed the world forever – Pax has been aged up to 12 for the show – but even at a tender age, he was cluey enough to realise that his world had changed too.

“I went from Aladdin to Osama overnight,” explains Assadi, 31.

“I didn’t know what was happening; it was a confusing time for everybody, especially for Middle Eastern kids growing up.”

“You’re 10 years old, but you suddenly have to deal with no one wanting to be your friend, and you’re thinking, ‘I didn’t have anything to do with this, I live in Auckland, I live like two minutes away from you, I’m your neighbour! What’s going on?’”

In those early and confusing days following 9/11, Assadi looked to nullify the confusion by getting creative: he tried to convince his schoolmates he was Tongan. In Raised by Refugees, we see Pax attempt the same move, desperate to distance himself from the drama playing out half a world away.

“That worked for a little while until the real Tongans started asking questions I couldn’t answer,” laughs Assadi.

Eventually, he realised that comedy (not finger guns) could be his most potent weapon.

A successful stand-up comedian in his native New Zealand, Assadi regularly mined his childhood for material before figuring out that his experiences would make for a perfect sitcom.

“It’s such a fascinating vantage point to be this kid in Auckland, New Zealand, which is 18 hours away from New York but is still heavily impacted by the event,” he says.

“And the beautiful thing about comedy is that it is so disarming; it’s a tool to open people up to dialogue.”

Raised by Refugees is the latest in a series of TV comedies created by first, second and third-generation immigrants that tap into the cultural minefield of identity.

From Aziz Ansari’s Master of None to Ramy Youssef’s Ramy and, closer to home, Benjamin Law’s The Family Law, the landscape is brimming with creators reflecting on what it means to be trapped between two worlds. 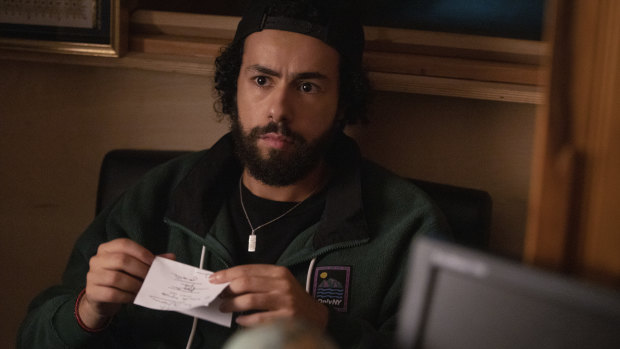 “During production, I had a whiteboard in my office where I had written ‘Pax is in cultural limbo’ above my desk,” explains Assadi.

“And that was my reference point; every time I got confused about the story, I just looked at that and remembered how it felt not to belong.”

While Assadi is well-versed in using his experiences on stage and screen, Raised by Refugees presented an opportunity to gain insight into his parents’ journey. Assadi played his own Iranian father, Afnan, which proved to be both an inspired and confronting casting decision. 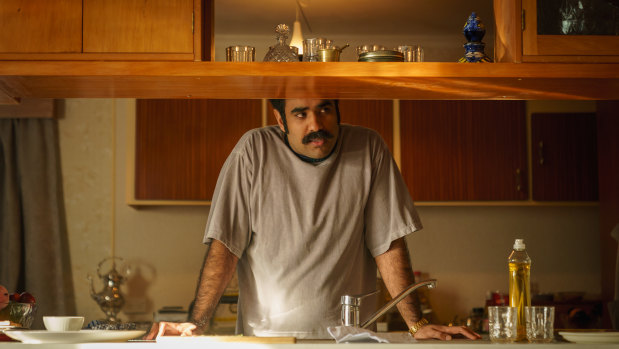 The apple doesn’t fall far from the tree. Pax Assadi playing his own father, Afnan, in Raised by Refugees.

“Playing my dad was easy, which means I’m very similar to my dad, which is a terrifying thought. I just grew the moustache and started yelling at white people in a Middle Eastern accent,” he jokes.

“I know it sounds cliched, but it made me appreciate my parents more; I never really thought about the fact that when my grandmother died, we couldn’t afford to send my mother home for the funeral or that my dad would get called names at work, so it helped me understand what they went through.”

Finding a young actor to play Pax was decidedly less tricky, with Assadi stumbling across newcomer Kenus Binu at the movies. 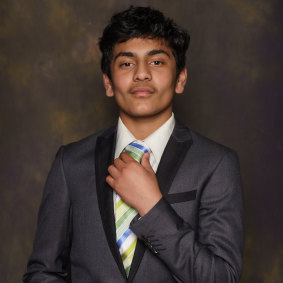 First time for everything. Novice actor Kenus Binu was discovered by Pax Assadi at the movies before landing the lead role.

“My wife and I were watching Wonder Woman, and Kenus was hanging out with his mates and throwing out gags, making the entire audience laugh, which was insane,” says Assadi.

“My wife was like, ‘You have to get this kid to audition’. By this point, we had narrowed it down to 50 kids from about 250, but then Kenus came in and nailed the audition, even though he had never acted a day in his life.”

Binu’s beginner’s luck looks set to continue with Raised by Refugees approved for a second season. Returning to his younger self is something Assadi relishes, with plans to explore the ultimate cultural crossroads: the obligations of faith versus the temptations of high school.

“I’m part of the Bahaʼi Faith, and we’re encouraged to avoid a lot of what you encounter at that time: sex, girls and alcohol,” says Assadi.

“So Pax will have to confront that, just like I did, but we’ll have a good time doing it.”

* Stan is owned by Nine, publisher of The Sydney Morning Herald and The Age.

You can listen to The Age and The Sydney Morning Herald’s culture news editor Osman Faruqi interview with Raised by Refugees creator Pax Assadi on the latest episode of our weekly culture podcast, The Drop.