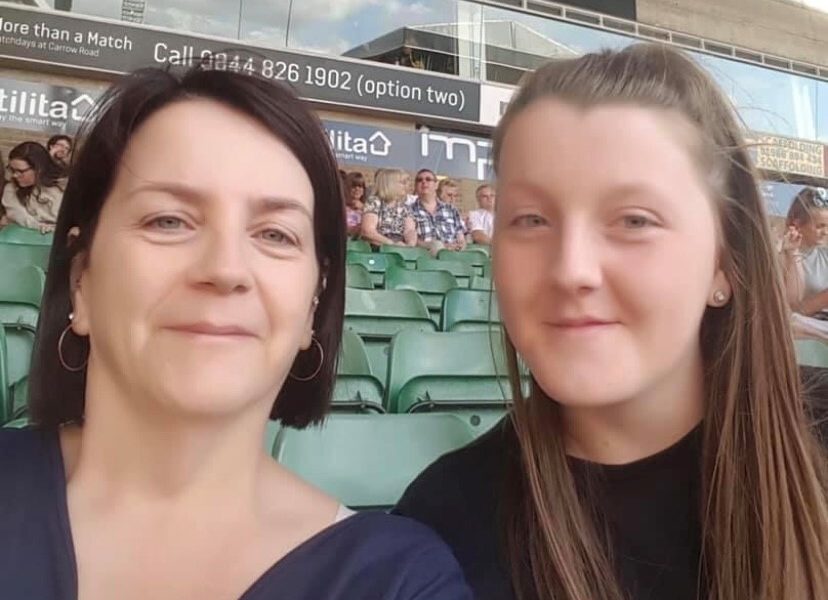 One day in December 2019, my mum noticed something on my neck.

My hair was up in a bun, and she pointed to a lump on the side that I’d never seen before. ‘What is that?’ I wondered.

Straight away, she told me not to worry; she’d get in touch with the doctor’s surgery and make an appointment. Though I could do these things for myself when pushed, I always used to rely on Mum to take the lead and take care of the big things in life – I didn’t have that much confidence.

Days later, I was in the nurse’s office. She touched my neck, then felt for any more lumps under my arms and around my groin. I had no clue what she was looking for at that point – even when she eventually asked if there was any history of cancer in the family, I didn’t consider what this might mean for me.

The next few weeks were a blur of blood tests and biopsies. Then, in February 2020 I found out.

I’d known that the news wasn’t good when I stepped into the doctor’s office alone and she asked me if anyone had come with me to the clinic that day. Mum was waiting outside because I wanted to show her that I could do this on my own.

But as soon as the doctor encouraged me to go and get her, I knew I needed to brace myself.

After my mum joined me in the office, the doctor told me that I had Hodgkin’s lymphoma.

As soon as you hear the word ‘cancer’, your mind jumps and automatically thinks of the worst. I imagined all the scary things that could come with a diagnosis like this, barely listening to anything the doctor was saying.

I tried to hold it together to show Mum that I could handle it; I didn’t want her to worry. It didn’t work, though – as soon as we looked at each other we both started crying.

In March, a few weeks later, I started treatment, just as Covid was getting more widespread. Because of this, Mum wasn’t allowed to come up to the ward with me. I hate seeing her sad, so I pretended as if I was fine.

But as soon as I went ahead on my own, I was taking deep breaths behind my mask, desperately trying not to have a panic attack.

This had been the first time I’d ever had any issues with mental health. I have a friend who has anxiety, so I knew how to calm myself as I was panicking – but it was a horrible experience.

Thankfully, the nurses on the ward were extremely helpful, and put my mind at ease when I was feeling nauseous. Both Mum and I had forgotten one of my anti-sickness pills ahead of the treatment, and I was being sick on and off for about four hours.

The idea of vomiting in front of people made me feel nervous and embarrassed, but they reminded me that they were trained for this, and saw this every day.

Over the next few weeks of treatment, where I’d be on the ward for anything from two to seven hours, I became closer to the nurses, and they answered all my concerns.

But something that was a real lifeline at the time was my counsellor, Jo. Over a weekly phone call, and occasional texts, I was able to blurt out all the stuff I was struggling with – worry about my diagnosis, my sadness about having to shield, my guilt for taking all of my mum’s attention.

For whatever I needed, my mum would drop everything to help me out. She made a timetable to make sure I took my tablets at the right time, and that I made my appointments as I was supposed to. Although my brother and sister accepted and understood it, I came first all the time. It’s a weird feeling.

Because I didn’t know my counsellor, I did feel as if I could open up to her more than with my mum: having someone neutral to speak to meant that I didn’t have to worry that my truth would stress her out. She would just listen to me – that’s what she’s there for.

As treatment went on, I continued trying to put on a brave face in front of my loved ones. But being in lockdown, as well as constantly thinking about my health, really began to take its toll.

Mum gave me a hug, and reassured me that I was always OK to tell her what’s on my mind

One evening, I was on FaceTime with my boyfriend, and he’d been upset at the fact that he couldn’t be there for me. Again, I stayed strong. But as soon as we came off the call, I called Mum up to my room – I had to be real with her about how I was feeling.

I burst into tears, saying, ‘I don’t think I can do this.’

Mum gave me a hug, and reassured me that I was always OK to tell her what’s on my mind – just as my counsellor predicted. She’d encouraged me to be honest with my mum about how I felt, and when I was having down days – because, of course, all she wanted was to be there for me.

From then on, I let my Mum in. One evening, I had to do white blood cell booster injections in my belly, and I sat with the needle in my hand for two, three hours. Mum kept trying to psych me up but I just couldn’t do it – not out of fear of needles, but out of feeling completely exhausted. It was tough, but at least I had Mum to hold my hand through it.

Hearing that a third of young people with cancer surveyed by Teenage Cancer Trust, don’t have access to a psychologist during their treatment reminds me of how fortunate I was to have that support from the get-go.

I think it’s appalling that people are only guaranteed support if their mental health reaches an extreme level – but it shouldn’t have get to that point. Young people with cancer should have access to support before they need it, because knowing that you have access to it can really do so much.

As of June 2020, I’m in remission. I haven’t spoken to my counsellor since ending my treatment, but I know that if I was really struggling one day, I could message her and she’d help.

If anything, my mental health is better now than before. I’ve realised that you can open up and you’re not going to get judged.

It’s made me realise that I can do these things on my own; I don’t need to be reliant on other people. I have strength that I didn’t know I had before.

Even though the cancer’s gone, I’ll always have some worry in the back of my head about whether it’s going to come back, and that’s a difficult doubt to live with – but I have the tools to help ease these thoughts so that they don’t overwhelm me.

I know now that I can open up to my mum and partner more than I probably would have done beforehand. It makes it easier because you’re not worrying alone. Rather than overthinking things, that person could say, ‘You’re just being silly’ and it helps diffuse the situation in your head.

I hope that more young people with cancer get the opportunity to speak to a professional about what they’re going through – I know first-hand the difference it can make.

Georgia is supporting Teenage Cancer Trust’s #NotOK campaign, which aims to ensure that all young people with cancer have access to specialist psychological support from the point of diagnosis. Support the campaign by writing to your MP

As told to Nicole Vassell

MORE: What it feels like… to have cancer at 11 years old

MORE: How you can support your child if they’re feeling anxious or depressed