When Joanna’s relationship ended, she packed up her bags and three dogs and moved interstate. The family lawyer (who is choosing not to provide her surname for privacy reasons), knew that if she gave her ex a chance to take them, or told him where she was going, she would have no chance of getting them back. 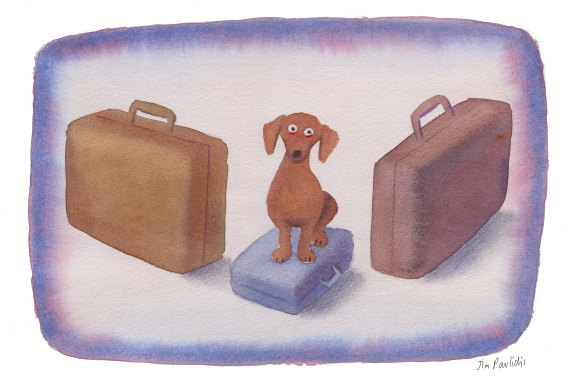 In Australian Family Law, pets are classed as property, so while many of us may see our pets as children, they’re not legally seen as such. As a family lawyer with experience handling pet custody disputes, Joanna was more familiar with the legal stakes than most. “We always say that possession is nine-tenths of the law,” she says, referring to the fact that custody can often presume ownership (while relocating a pet would not “extinguish the other party’s rights or ability to recover the dogs”, it would make a court or the police less likely to intervene, says family lawyer Brendan Herbert).

One of the dogs, a German Shepherd, Joanna had retained custody of from a previous relationship. The other two, a pomeranian and a chow chow, they had adopted together. “I had actually kicked him out of the house, but over the following days as he came back to collect his things, he’d say to the dogs, ‘Don’t worry. I’m coming back for you.’ It felt like a threat.” She adds that while the couple did share two dogs, her partner was often on the road for work. Joanna was the one who covered the dogs’ daily expenses, medical costs, and was their primary carer, a key reason she felt she had the right to keep custody of them.

While she says she did consider a pre-nup, one never eventuated. As she points out, “you don’t go into a relationship thinking about how it’s going to end.” 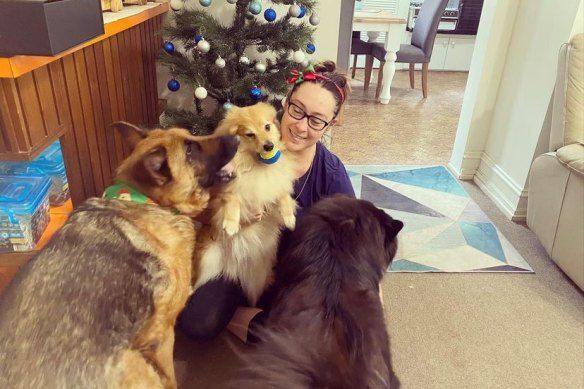 Joanna made the decision to pack up and move interstate with the three dogs she had shared with her ex to avoid losing them.Credit:

For Brendan Herbert, principal lawyer in family law at Macpherson Kelley, arguments over pet custody have always been part of his work. He suggests, however, that disputes may have intensified as our emotional bonds to our pets have become stronger, especially during the pandemic.

Aside from emotional value, he’s also worked with clients who have a vested financial interest in their pets, for example racing, breeding, or acting animals.

Herbert says that “courts are reluctant to intervene on such matters, instead encouraging both parties to reach their own decision”. If they can’t come to an agreement on their own, then lawyers like Herbert will step in to assist with negotiations. Factors considered include who the pet is registered with under their local council, who paid for the pet, who paid for its vet bills and food, as well as who will be best placed to care for the pet after the separation. If a child is involved, this can also sway things. “Especially in situations where it’s a high conflict parental separation, the pet will usually go with the child to help ease the transitions,” says Herbert.

Outcomes from this vary greatly, and include “single ownership, shared ownership, shared custody, visiting rights and even ‘farewell ceremonies’ where one gets to spend some time saying goodbye to a cat. ” In some cases, these outcomes can be made into a binding order.

Herbert has also helped couples include a pet in the terms of pre-nuptial financial agreements that outline the “arrangements, rights and responsibilities of each party in the event of a relationship breakdown”.

A year after Tessa (who prefers not to disclose her last name) and her partner got their labrador puppy, they split. The pair have been successful in negotiating shared custody. Every afternoon after work, Tessa walks over to his house to feed and walk the dog. Once a week, the dog will visit Tessa, who lives in an apartment, for a sleepover. They split all costs evenly down the middle.

While the couple used lawyers to divide up their assets (including the house they had owned together, which her ex now lives in), the breakup was amicable enough that lawyers were not needed when it came to the dog. “My ex and I had quite a drama-free breakup and have managed to stay friends, but in saying that most of the time we only ever talk about our dog.”

Tessa trusts that her ex will remain faithful to their agreement, however, she does sometimes worry that a new girlfriend may not be happy with her visiting so often.

For Jill (who’d prefer not to reveal her last name), leaving her two oriental cats behind was done partly out of sympathy for her ex. The couple split after Jill decided to relocate from Melbourne to Sydney for a job. He was “pretty devastated and not coping well with the breakup”, especially as it coincided with the death of his mother. “I didn’t want to break his heart any further.” Jill also adds that the breed of cat meant they were extremely clingy, and might not fare well with a separation, especially if they were to move to an unfamiliar environment.

Often forgotten in such situations is the effect of a separation on the animal. Jacqui Ley, a veterinary psychiatrist at Melbourne Veterinary Specialist Centre, emphasises that there’s a “bigger picture than just the two owners involved”, and urges couples to carefully consider the needs of their animals when negotiating custody.

The separation of a household can be disruptive and extremely stressful for an animal, even in amicable separations. “Animals may lose their home and have to adjust to a new environment, or lose contact with someone who they had regular contact with,” she says. Companion animals can also be divided up between partners, causing greater emotional stress.

In more acrimonious breakups, a separation might actually be a relief for the animal. Pets can pick up on tension, psychological stress and physical violence that can be frightening. Joanna noticed an improvement in the dogs’ move following her breakup. The “tension in the house towards the end of the relationship was huge. The dogs could definitely pick up on it.”

Ultimately, “People need to buck up and think about the welfare of the animal,” says Ley, which may mean making sacrifices, such as organising to come and walk the dog during the week.

Things to consider when sharing a pet with an ex

Make the most of your health, relationships, fitness and nutrition with our Live Well newsletter. Get it in your inbox every Monday.

Most Viewed in Lifestyle