If it were real life, Collingwood and Melbourne would have played footy at the MCG yesterday afternoon.

Instead of a handful of walkers and a man doing tricks on his bike, the 'G concourse for Round 21 would have been filled with colour, banter and the smells of expensive cheap things in fryers. 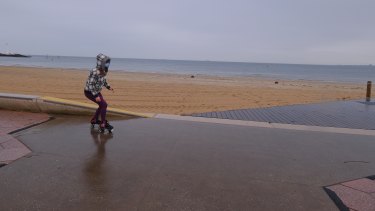 The familiar footy ingredients were still around, like the Coodabeen Champions on ABC radio for the morning ride in. The weather – a homely 14 degrees with light showers and grey skies. Haydn Bunton was still in perpetual stride outside gate six and Don Bradman was raising his bat at gate five.

But the familiar was so unfamiliar in Melbourne's first weekend of the most severe civic restrictions in its history, it was just, well, "bizarre," says 28-year-old James, out on his hour-long yard time and "drawn to the MCG".

He was just musing with his walking partner, Majlin, if we might still get grand final parties. Maybe.

Majlin says a stranger ran up to her asking where she bought her takeaway coffee.

"Such a weird thing to be asked in Melbourne," she says, referencing the usually-ubiquitous cafe scene.

The pair was happy to stop and chat, as was everyone The Sunday Age spoke to around Melbourne yesterday. Fatigued and over it, of course, but getting on with life.

"It's not the end of the world," Majlin says. "You just take it one step at a time".

At the South Melbourne Market, the booming butcher voices at Ralph's Meat Company were cracking jokes with the customers. 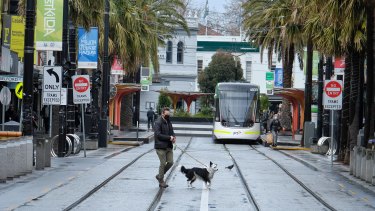 "These things are the hardest," says butcher Darren Garner, pointing to his mask. "At the end of the day, you take the mask off and it's just, 'Ahh, how good'."

Under stage four, the market's merch sellers have shut their roller doors and only one family member is allowed out to shop. Bollards at the counters remind people to keep their 1.5 metres and, mostly, they do.

Darren reckons the crowd is about 50 or 60 per cent of a normal Saturday.

"There's people here, but there's not the bustle," he says. "You've got three people at the counter and they're all buying something. No one's just looking."

The chatter at the counter has become noticeably more political, he says. Some "love" Premier Daniel Andrews, some want him gone.

"And I agree with everybody," Darren says, crinkling his eyes. "I learned that a long time ago.

"[But] people are positive. It's not going to get any worse than this. At least we hope. The sun's going to come up tomorrow, don't worry."

The only mouth not covered with a mask in Melbourne yesterday, at least that The Sunday Age saw, was Luna Park, on the St Kilda foreshore.

Vadim and his daughters Mila, 5 and Talia, 8, regularly pass under those giant teeth, but yesterday they were kept to a short walk and bakery treats on the usually-heaving Acland Street. 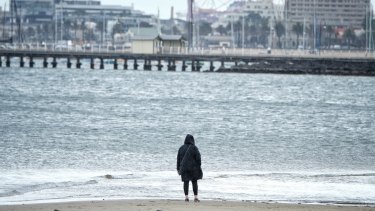 Mila, who had just started school before the first shutdown, laments the state of her city.

"It's boring doing homework when we should be doing it at school," she says. "We want to be at school."

She explains how she and Talia are, nonetheless, having fun making pizzas, watching movies and having Zoom chats with their friends.

She stomps after the pigeons. "And I like chasing birds. Write that down, too," she says.

Across Jacka Boulevard (named after Albert Jacka, who, for some perspective, lived through the Gallipoli campaign, Spanish flu and the Great Depression by the time he died at the age of 39) life on the beach and boardwalk was as flat as the waves.

No more than three people were on the pier; relief, at least, for the harried penguins.

"If you look at this in increments, it's a small percentage of our lives affected," Vadim says, speaking to his daughters as much as to The Sunday Age. "People in other countries live every day in conditions and environments much worse than this.

"We still have a good quality of life. We are in Australia."

Related posts:
TV and Movies
’90 Day Fiancé’: Jihoon Lee Finally Reveals Why Deavan Clegg Left Him
Big Bang Theory: How did Kunal Nayyar really feel about The Big Bang Theory ending?
The Bachelorette spoilers: These men are believed to be Tayshia Adams' final four
Cool Stuff: 'The Mandalorian' Razor Crest Ship is The Latest HasLab Project, and It's Already Fully Funded
Rev. Al Sharpton Shares His Experience With Protesting on 'Daily Show'
Recent Posts
This website uses cookies to improve your user experience and to provide you with advertisements that are relevant to your interests. By continuing to browse the site you are agreeing to our use of cookies.Ok