The Titanic in color: Incredible colorized images show the luxury and elegance aboard the doomed liner 110 years after its maiden voyage 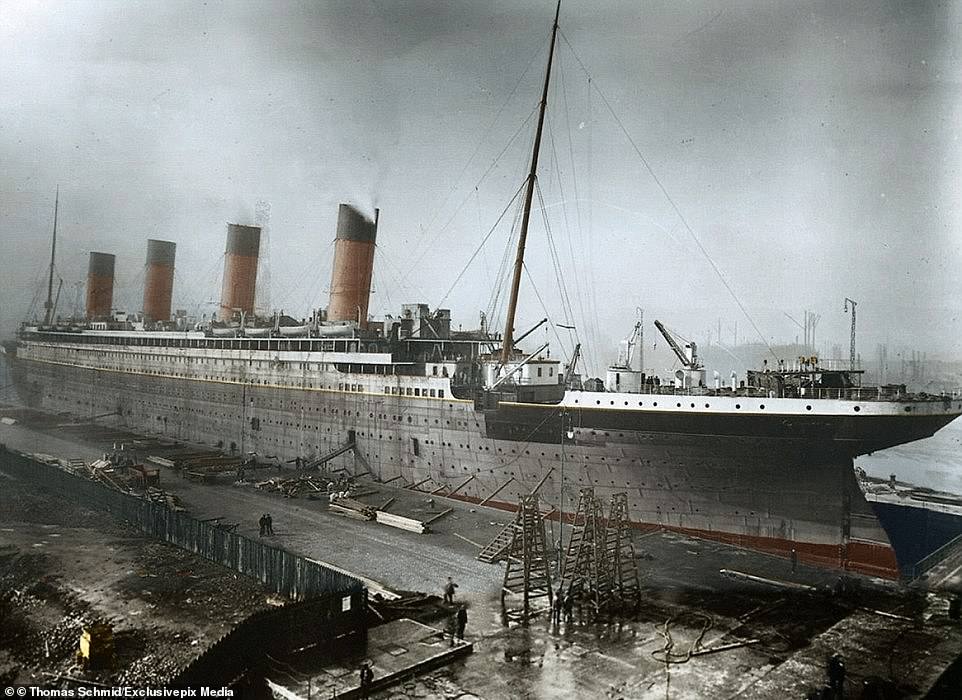 The RMS Titanic was one of the most opulent liners ever built and the largest steamship in the world – and  it has been brought back to life in amazing color images. The unique project took black-and-white images from the iconic ship and turned them into colorful photos. Interest in the ill-fated liner, which struck an iceberg on its maiden voyage from Southampton, England, to New York City and sank on April 15, 1912, has barely dwindled over the years. 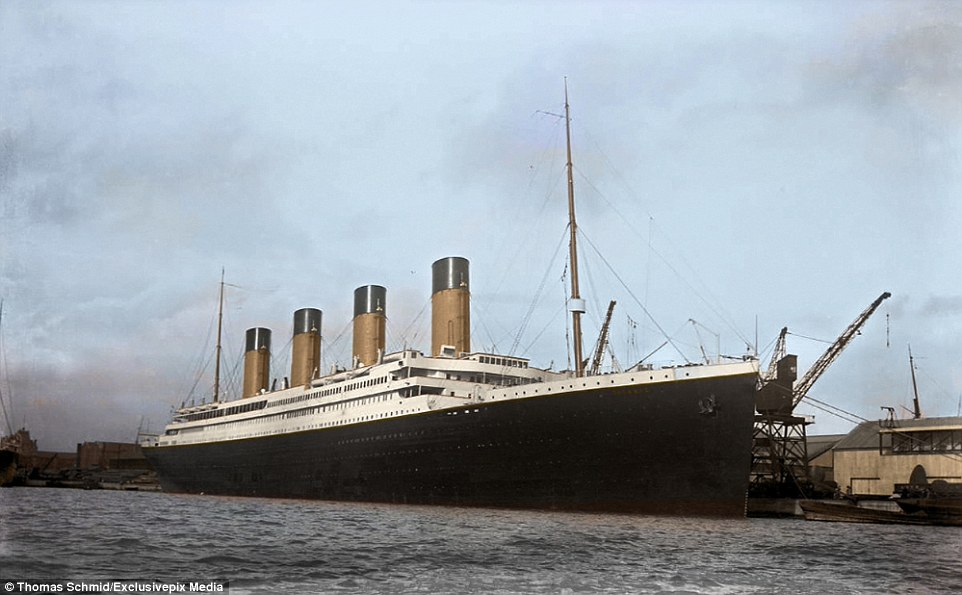 Here, the RMS Titanic is pictured at Southampton Dock before departing on its maiden voyage. The photo shows eight lifeboats along the starboard-side of the boat deck and four lifeboats near the bridge wheel house. The ship had 20 lifeboats in total but they could only accommodate 1,178 people, despite the fact that there were approximately 2,224 souls on board. 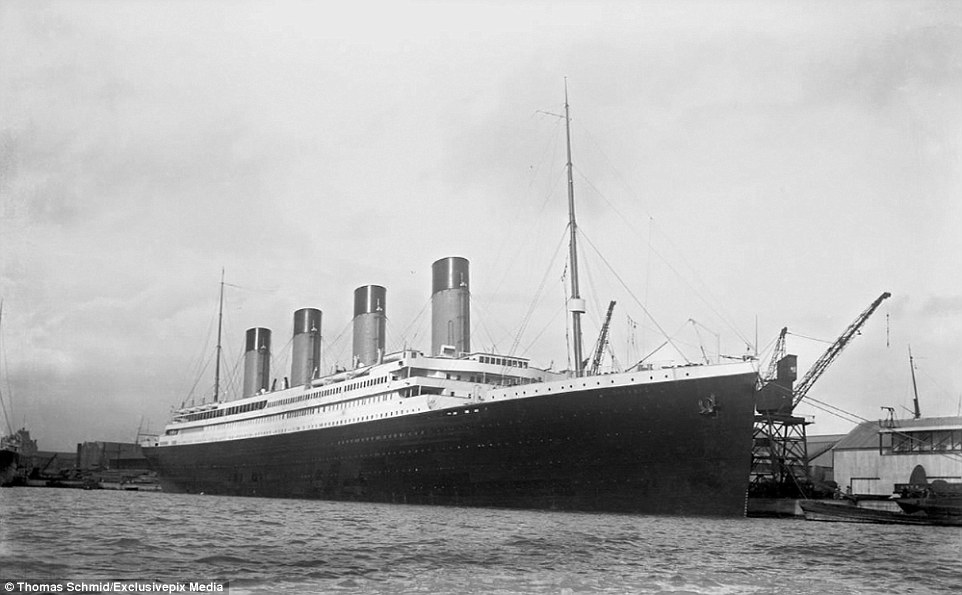 While the ship was capable of carrying 64 lifeboats, the designers chose not to include them all, meaning lives were needlessly lost. Pictured: The original black-and-white photo of the Titanic before it departed from Southampton. 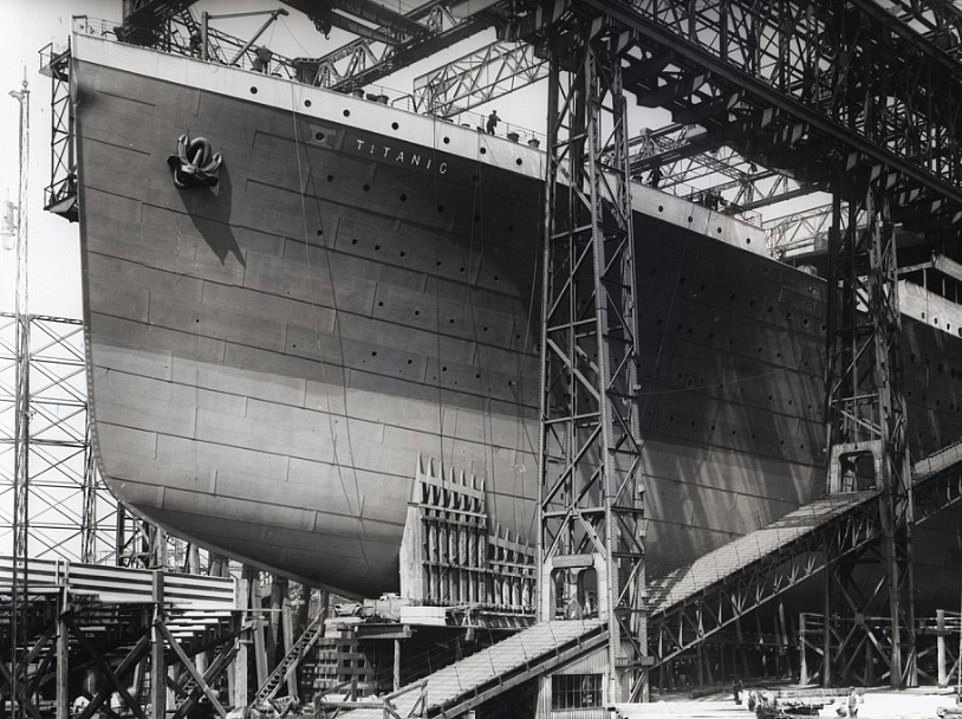 Construction of the Titanic took place at Harland and Wolff shipyards in Belfast from 1909 to 1911. 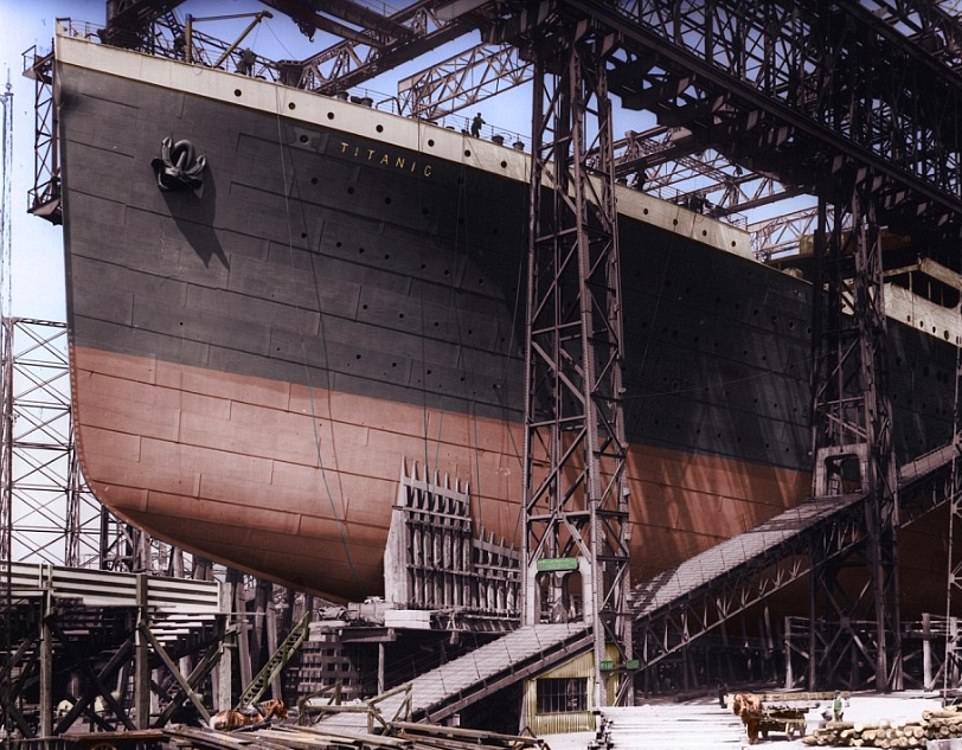 The ship took approximately two years to build, and 3,000,000 rivets were used in the construction of the hull, a mix of iron and steel. 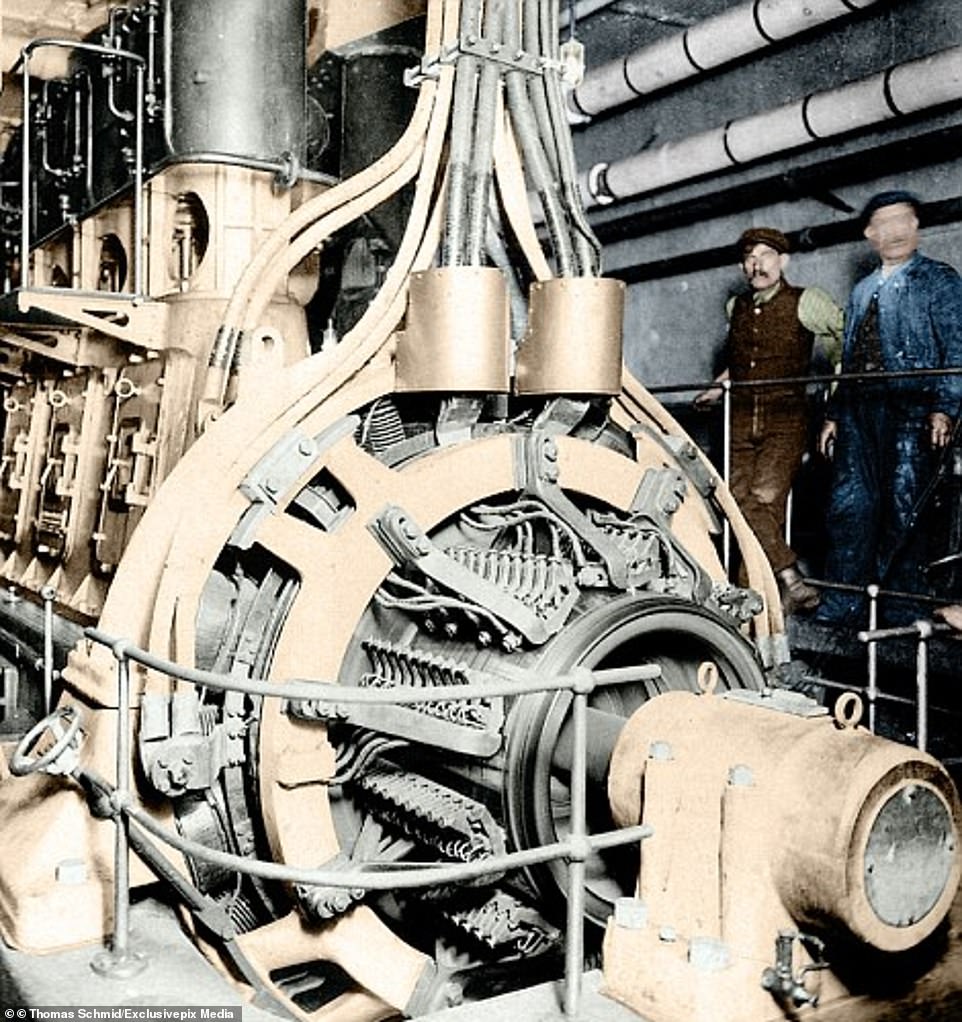 A total of 1,517 people died when the Titanic hit an iceberg. Pictured: The ship’s engine room. 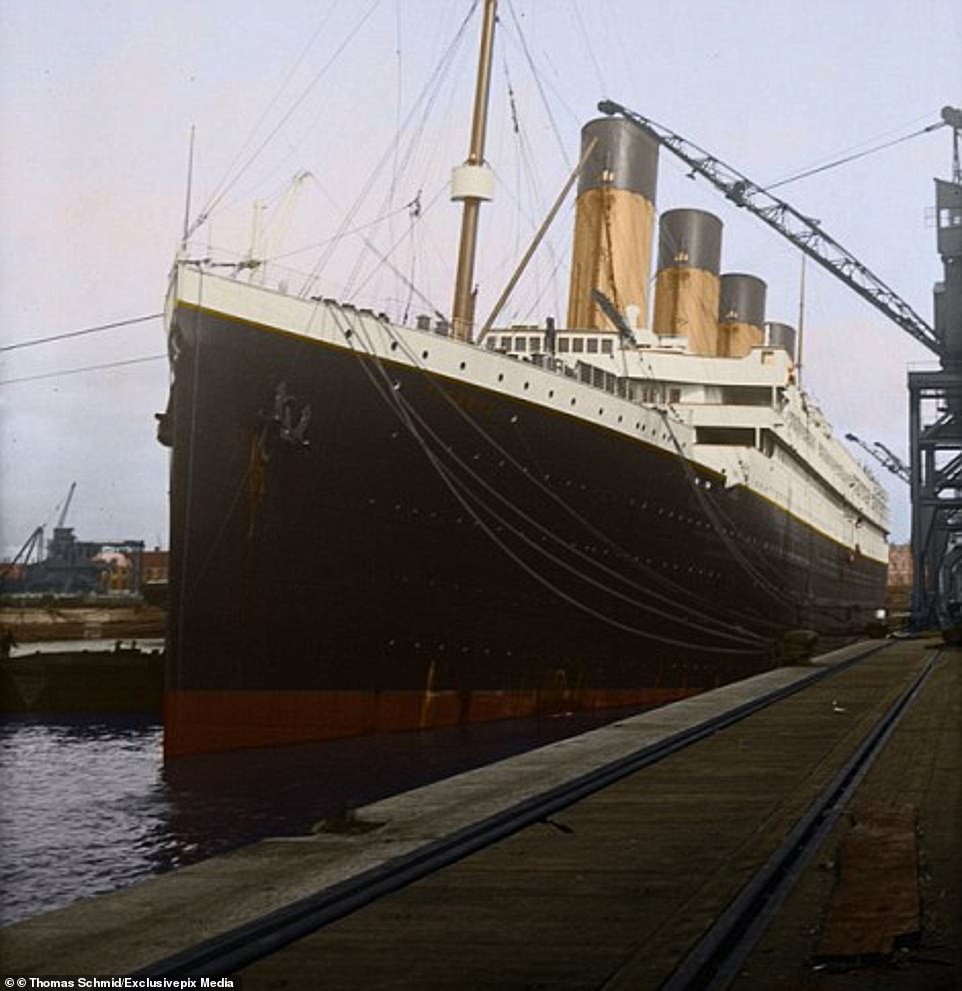 As well as its tragic end, the Titanic is renowned for the luxury passengers indulged in onboard. Here, the boat is seen preparing to launch. 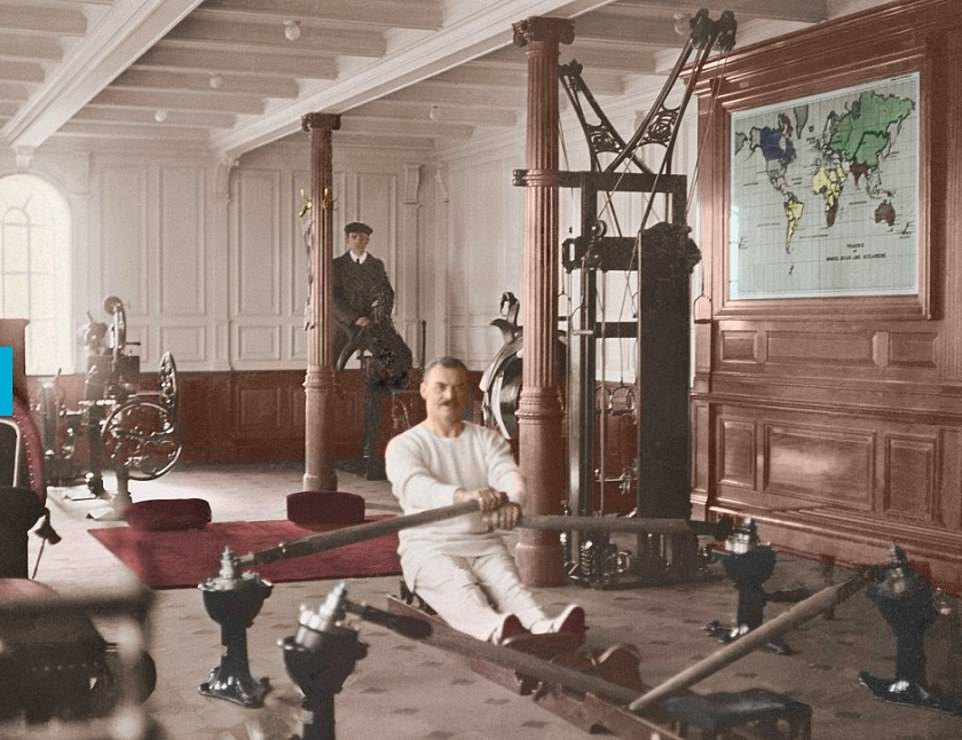 The ship also boasted a first-class gym. Thomas McCawley, the Titanic’s fitness instructor, demonstrates a brand new rowing machine. First-class passengers had the use of the gymnasium, which also included dumbbells, a mechanical horse and a mechanical camel.

The ship’s luxurious interior resembled the contemporary style of leading hotels such as The Ritz. The dining rooms were decorated with ornate ceilings and plush carpets. 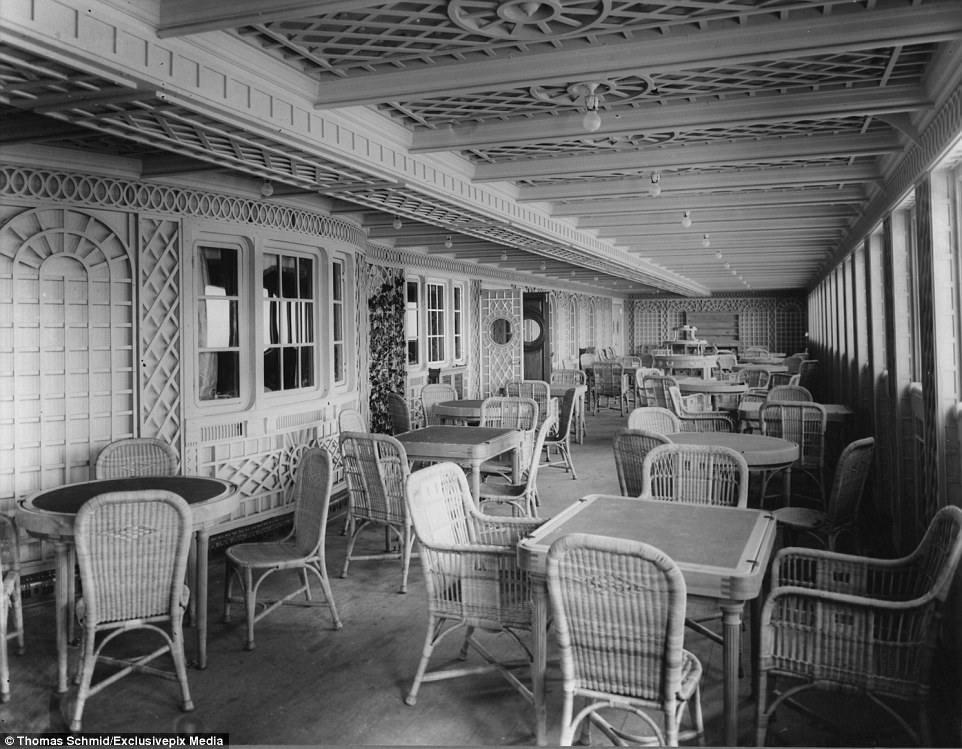 The Cafe Parisien was on the starboard side of the ship and was connected to the À la Carte Restaurant with which it shared a menu and servers. The cafe – only available to first-class passengers – was most popular among younger passengers. 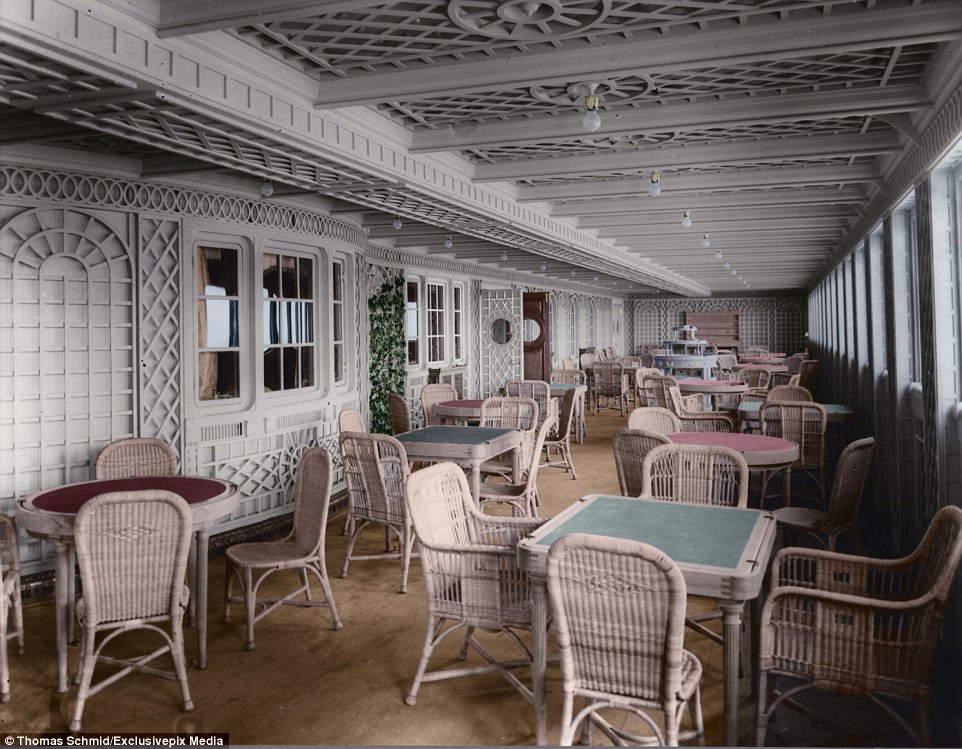 In colored images of the cafe, its wicker tables feature pink and blue tops while the chairs are an off-white color. The cafe, which could accommodate up to 69 passengers, was decorated with ivy-covered trellises and other climbing plants. 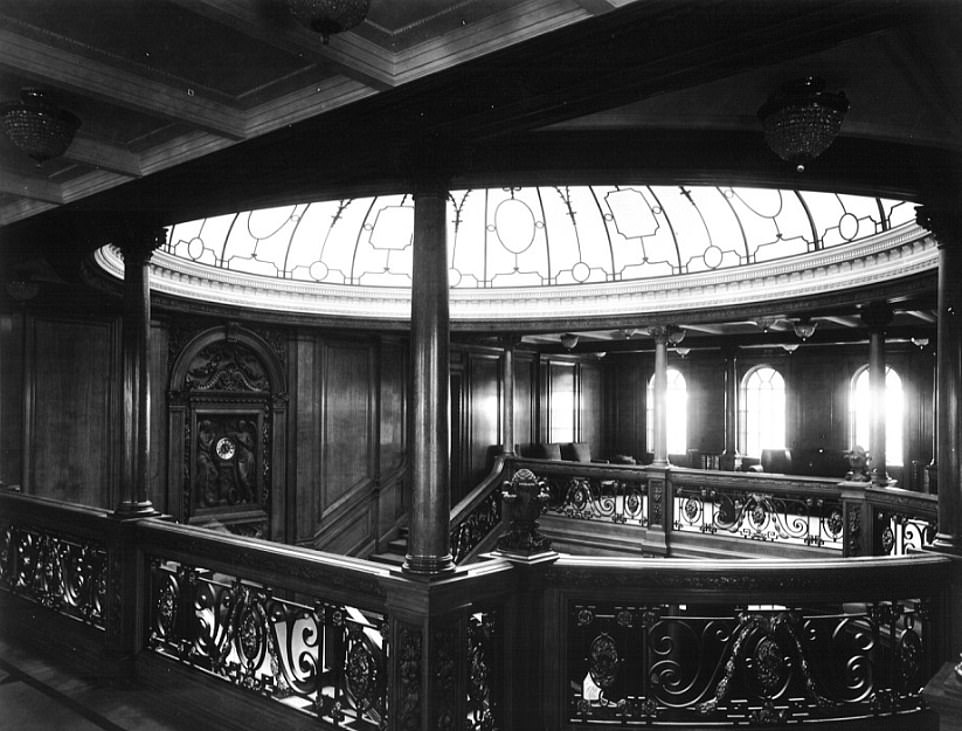 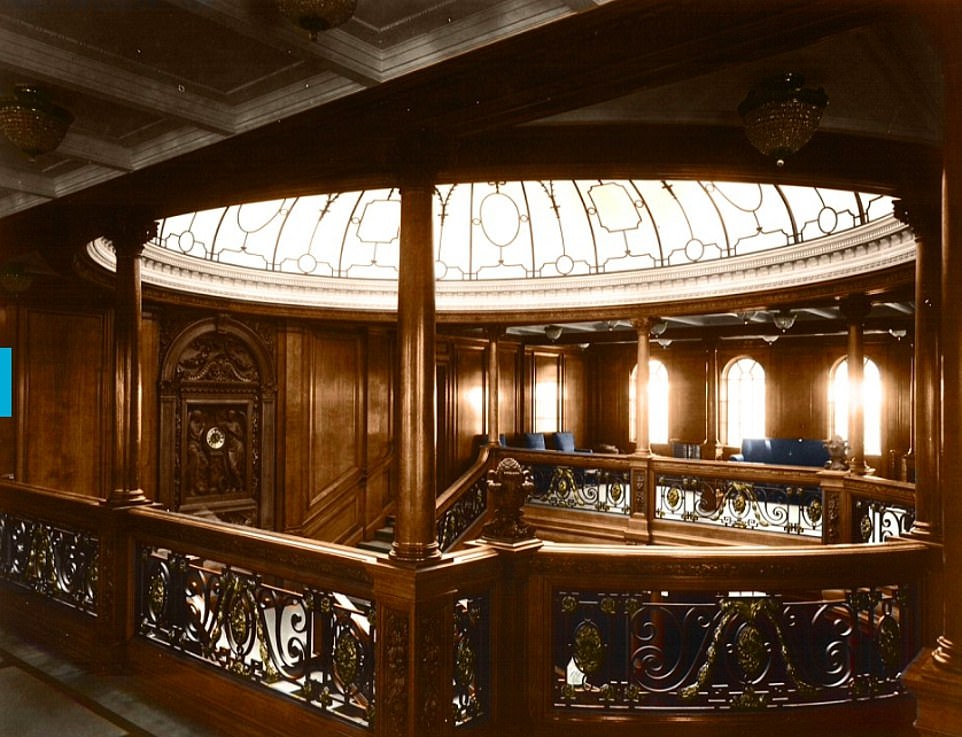 Irish company Harland and Wolff decorated the staircase with oak paneling and gilded balustrades, and a glass dome was put on top for a majestic finishing touch. 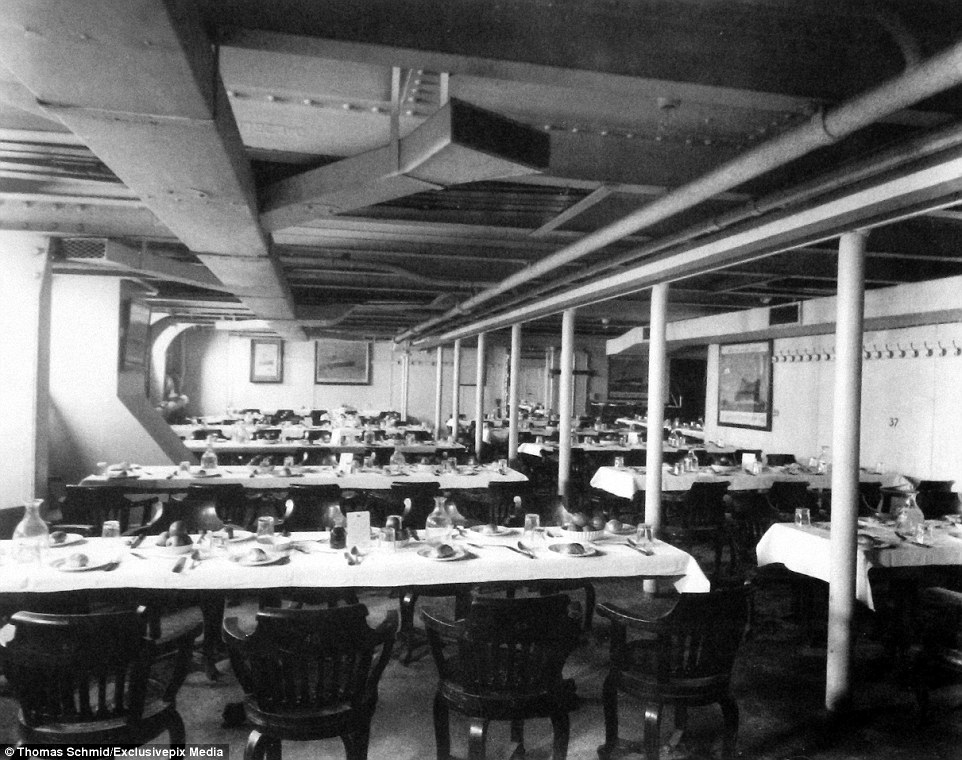 The Titanic had several dining rooms for the various classes aboard the ship. Pictured here is the third-class dining saloon, which was enameled white and brightened by side lights. The dining room featured long tables that could seat up to ten people in specially designed chairs. 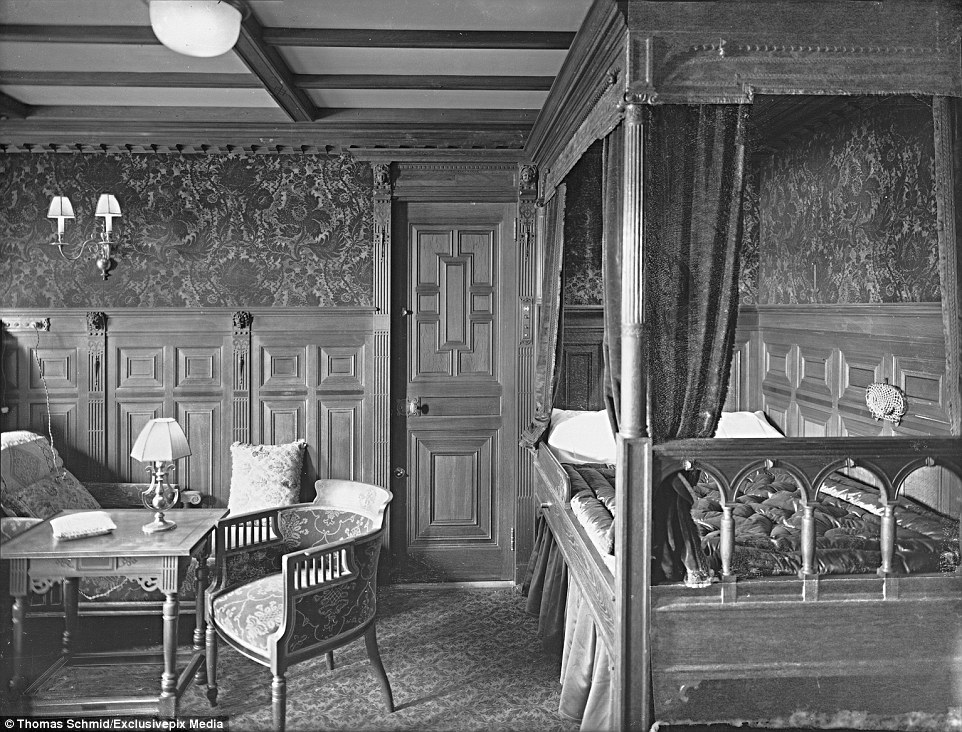 The Titanic’s first-class accommodation held up to 735 passengers and featured single-room cabins as well as multi-room suites. 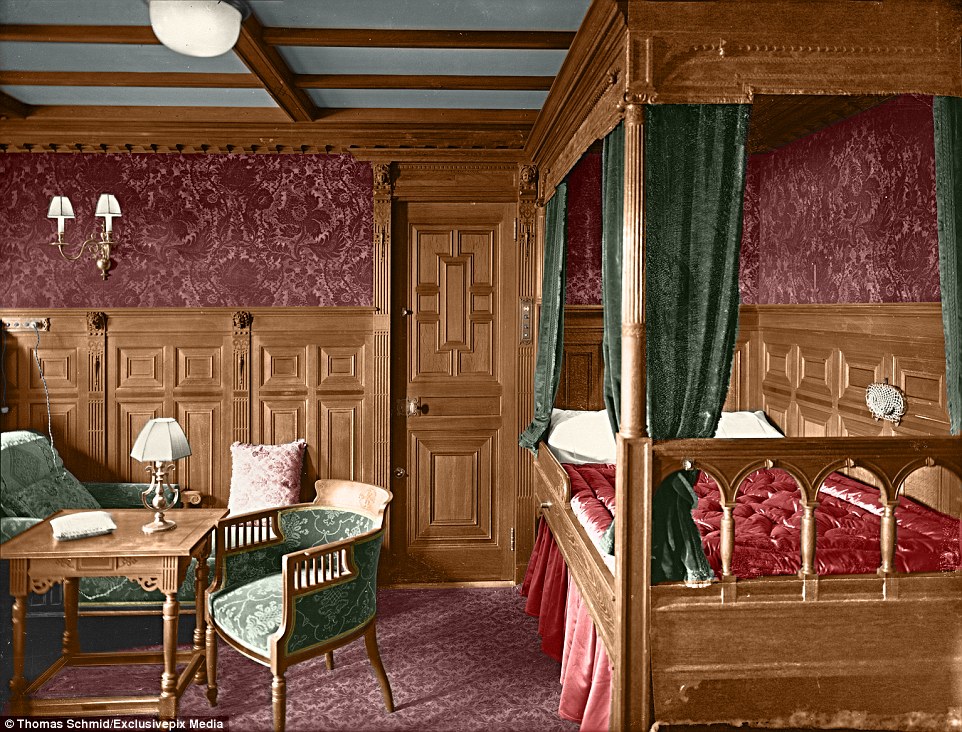 The first-class rooms (pictured) were decorated with Dutch-style furniture and located across five decks. Also among the first-class wing were several single-bed standard cabins used by servants and staff. 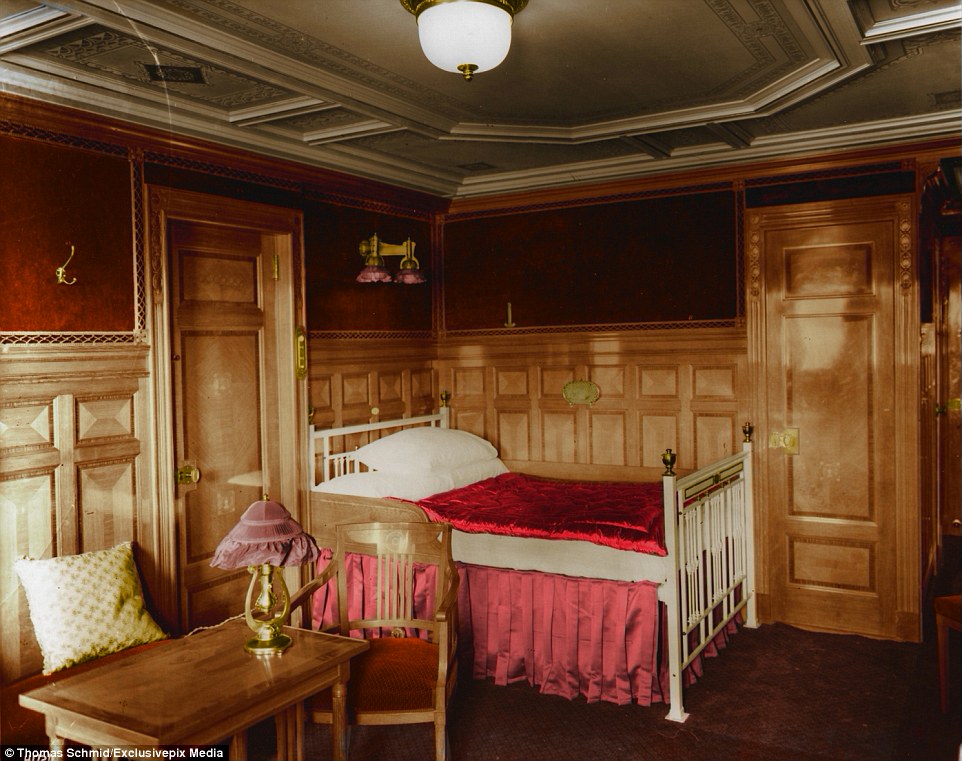 The expensive first-class staterooms (pictured) were decorated in period styles, including styles ranging from the periods of Louis XVI, Louis XV, Georgian and Queen Anne. 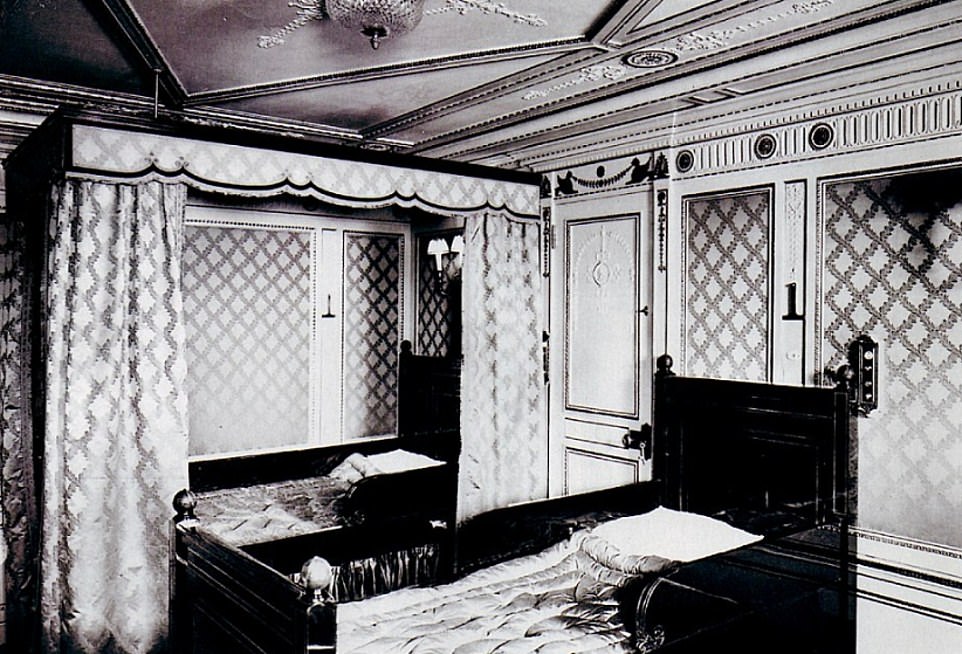 Some of the first-class suites had more than one bed and a door connecting the room to another room in the cabin. 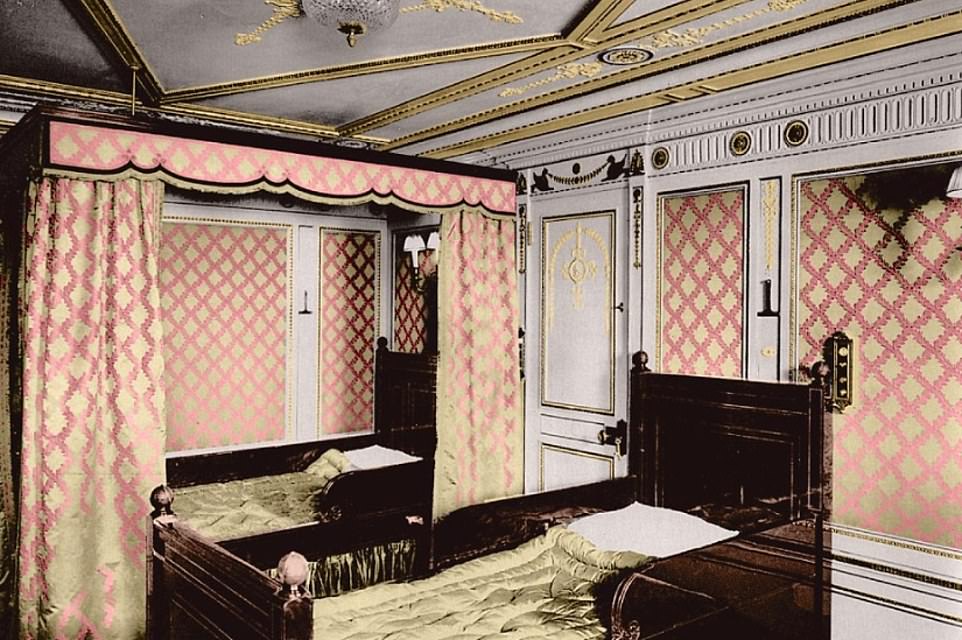 It is believed these rooms could be used for children aboard the ship with their parents. 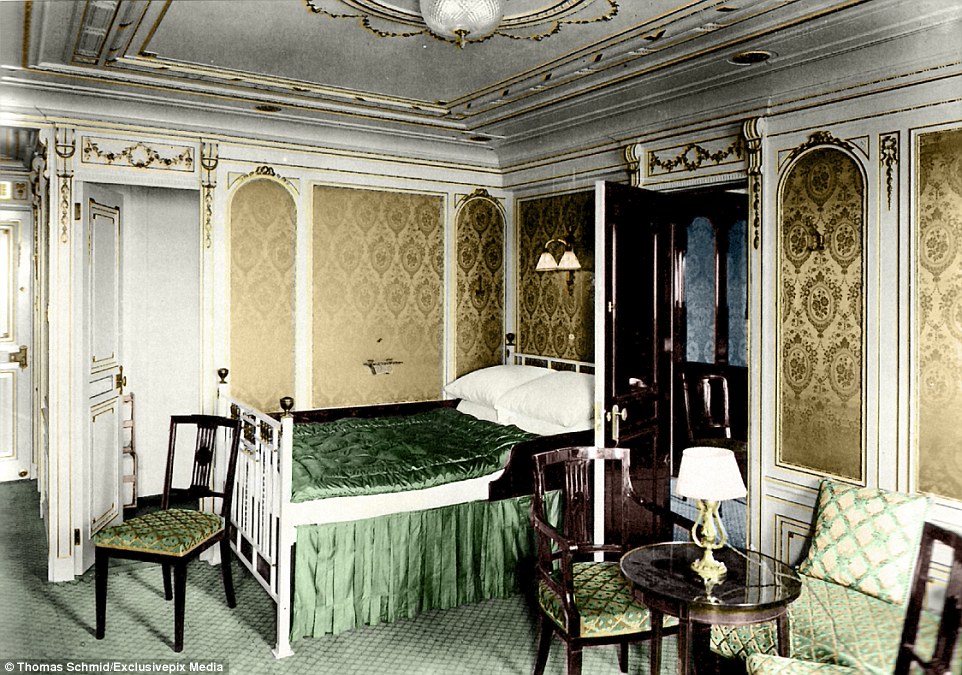 The Titanic’s designers wanted their liner to resemble a fine hotel on water with the highest stands of luxury. 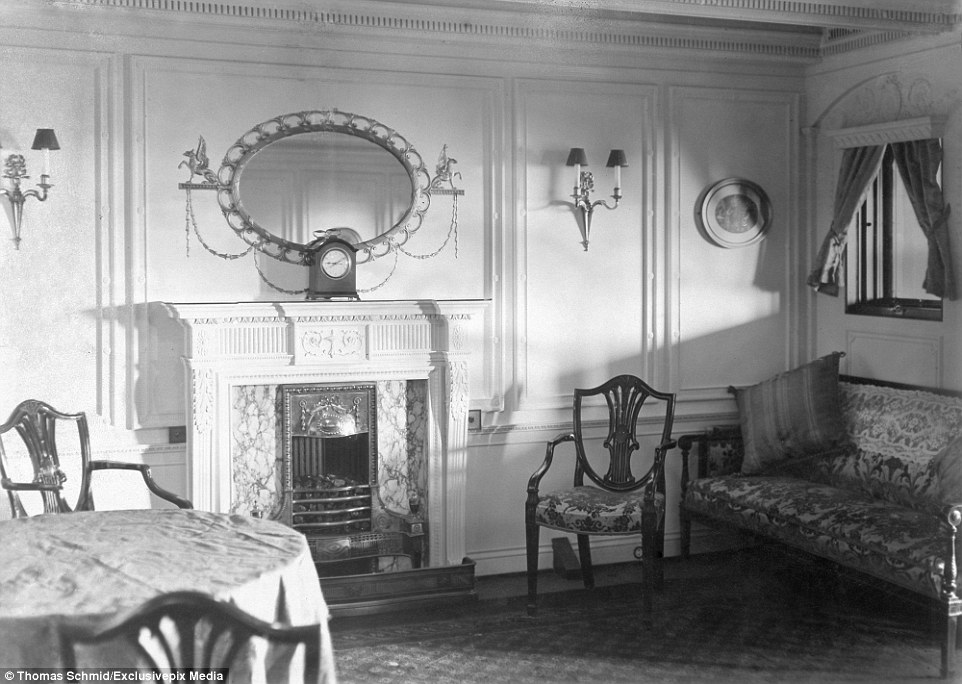 Only the wealthy could afford to travel first class on the ship, but, luckily for them, children and pets could come aboard at half price. Second- and third-class passengers took much smaller cabins on the ship, often with bunk beds and sharing bathrooms and toilets. 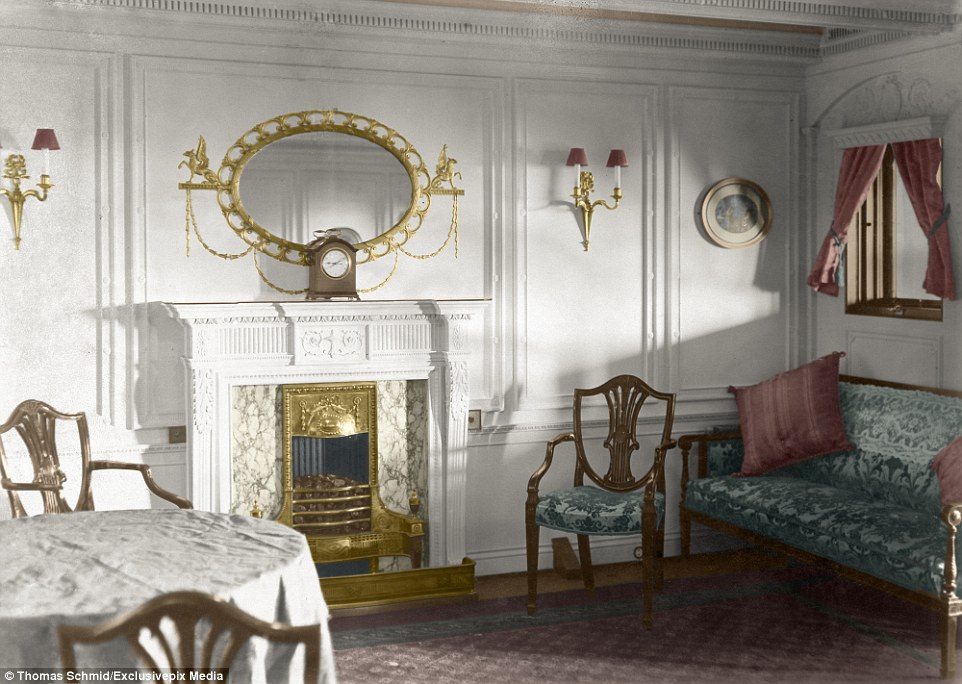 Outside of the ship’s cabins (pictured), passengers could take part in several activities, including using a library, visiting the barbers or swimming in the ship’s pool. There was also a squash court, Turkish bath and electric bath. 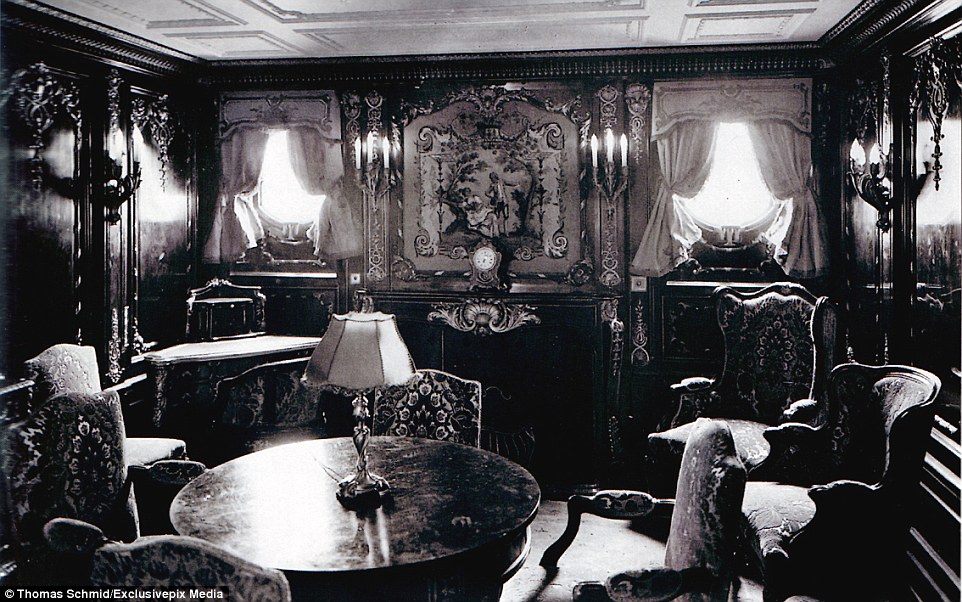 For first-class passengers who were less active, there were plenty of lounge rooms to spend time in and an orchestra performed in various rooms throughout the day. 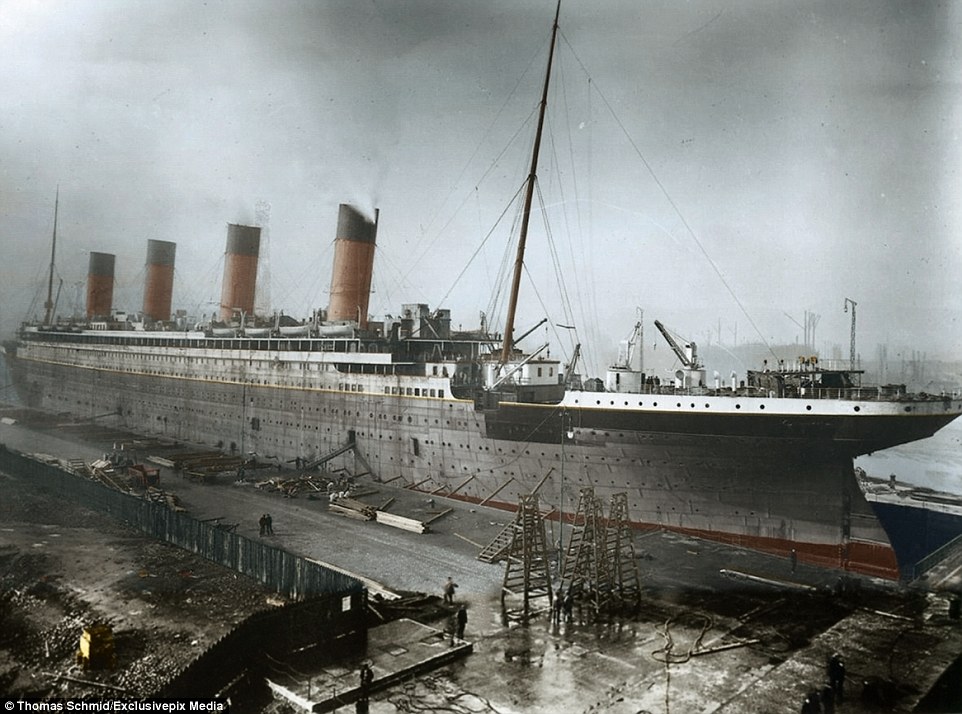 The ship cost $7,500,000 (£1.5 million) to build, and it took a staggering 20 horses to transport the main anchor. Pictured: Titanic at the Harland & Wolff dockyard in Belfast. 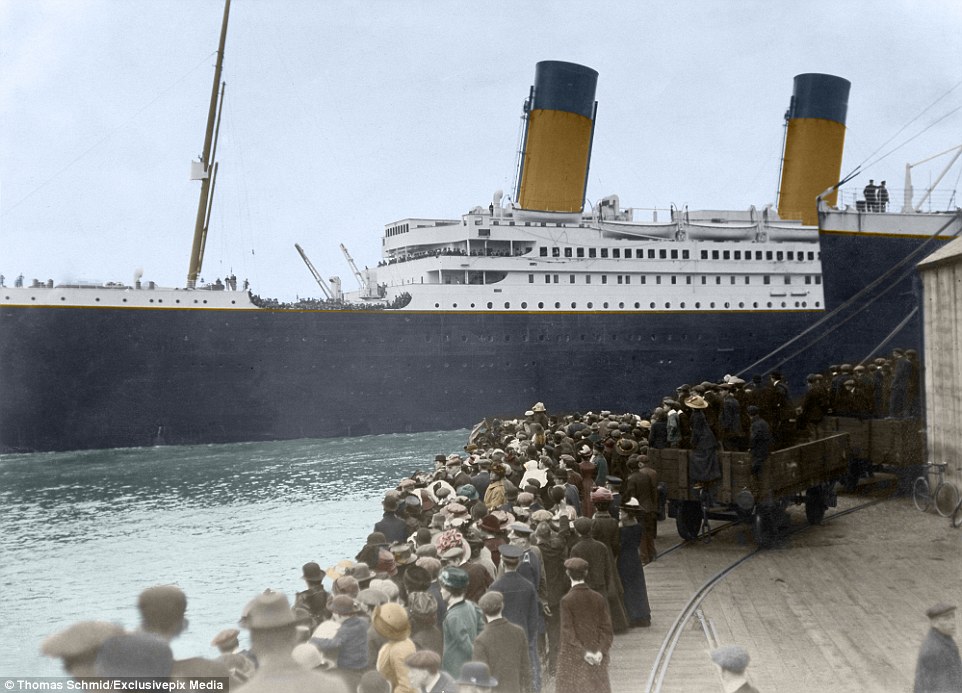 The luxurious Titanic was one of three Olympic-class vessels built for White Star Line between 1908 and 1914. Hundreds of people lined up to see the liner head off on its first – and only – voyage. 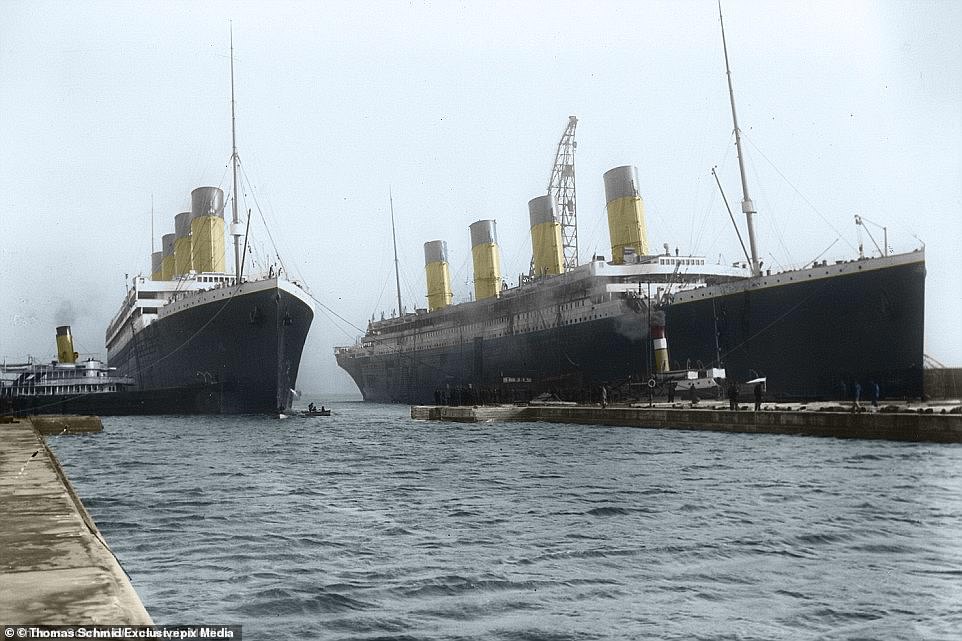 The Titanic, Olympic and Britannic were built in response to the threat posed by the Cunard Line’s elegant liners: the Lusitania and Mauretania. The concept of the three ships was made over a dinner between White Star Line chairman Bruce Ismay and Harland and Wolff chairman William Pirrie in 1907.