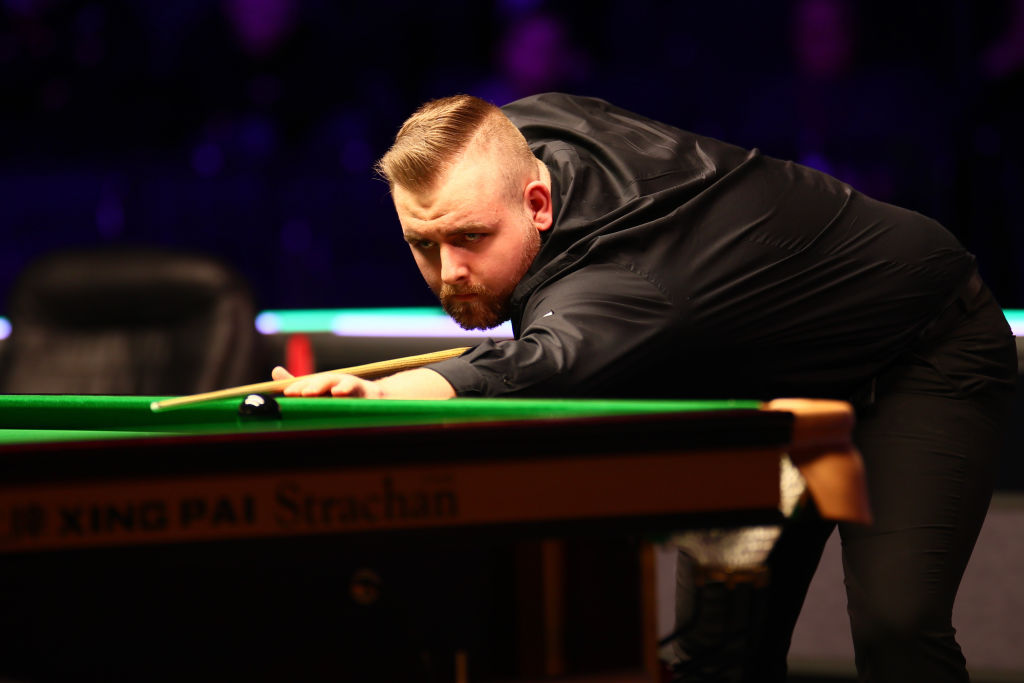 Jackson Page won his place back on snooker’s main tour through Q School this week and the scare of briefly losing his professional status has given him a renewed motivation and focus to fulfil his immense potential.

The 19-year-old has been seen as one of the sport’s brightest young talents for years, catching the eye at just 15 when he won two matches at the 2017 Welsh Open.

He turned pro in 2019 and it didn’t quite go to plan, slipping back off the tour this year, but that has not dampened Page’s confidence in his ability or whether he has a future as a professional.

Far from celebrating his progression through Q School at the earliest opportunity this week, Page feels he should be on tour and it is more a feeling of relief that he has achieved what he expected of himself.

‘I’m relieved, I didn’t have a great season last year so relieved to be able to start again, have another crack and hopefully play better this time,’ Page told Metro.co.uk.

‘I haven’t really celebrated, I just feel like I should be there anyway, it’s not so much a celebration, more of a relief and happy that I’m still there.

‘I was actually looking forward to Q School because I had a bad year on tour so I wanted to see where my game was at, compared to before the tour.

‘It was nice to go straight through and do it pretty comfortably in the end. I was really happy and pleased with myself, because on the last day I started to play some good stuff as well, so that was a bonus.’

Page had a tricky run to regain his tour card, beating former professionals Michael Judge, Soheil Vahedi and Michael Georgiou in the deciding match in Sheffield.

However, any game at Q School can be a huge challenge, given the pressure of continuing your career in the game and Page found his first match against Belgian Daan Leyssen his toughest test.

‘It’s not easy, you’ve got so many players who could potentially turn you over if you’re not on your game. It is tough,’ he said. ‘I worked my way into the tournament, started pretty bad but got better with every game, which was a bonus, but it’s really tough.

‘The first game there was a bit of danger because I was really, really struggling, I felt so uncomfortable. I managed to sneak through and I had control of most of the rest of the games.

‘I don’t really know what happened, I felt so uncomfortable on the table, I almost felt like I’d never picked up a cue, I don’t know why, I honestly don’t.

‘I’ve put so many hours in, been working on my fitness, I’ve been doing everything. It was just a weird one, only the first couple of frames really, I got into it then, but it was a strange one because it’s not really happened before. I’m just happy to get through.

‘I didn’t know anything about him [Leyssen]. His potting was very good, potted a fair few long balls, he could play. His safety just let him down. A couple of years ago you could have a few plum draws but now it’s 99% very strong, they can play.’

Page has been working hard on and off the table in preparation for Q School, getting his game and himself in good shape.

Looking at the likes of Judd Trump and Ronnie O’Sullivan at the top of the game, the Welshman felt that getting fitter would benefit him and a new approach has seen him lose nearly two stone in recent weeks.

‘I’ve done a lot of dieting, eating the right things,’ Jackson explained. ‘I like to play a game of golf in the evenings. I can go up the mountain next to my house now the nights are later, I’ve been doing a fair bit of walking.

‘I’m almost two stone down now, my waistcoat is quite loose. It’s a nice feeling, lifts you up, it’s great. I want to lose a bit more, I’m always going to be a bigger lad, but I can be slimmer.

‘Look at Judd, he’s ripped, his fitness couldn’t be any better and look what he’s doing. You’ve got to look at the top boys – Ronnie and his running – and think that’s the way forward. You’ve got to try and replicate what they’re doing because they are there for a reason.’

It is easy to forget that Page is still a teenager, given that he has been around for a number of years already, and he feels that it has been typical teenage ill-discipline that has held him back in the pro ranks so far.

The youngster believes he has put that behind him now and his new regime will see him succeed where he struggled for results over the last two years.

‘My first year on tour it wasn’t too bad. I won every game I should win and then lost to players higher than me in the rankings,’ he said. ‘It was okay.

‘But then the second year was bad. I had a good start in the first tournament, last 16 at the European Masters, and after that it weren’t very good.

‘A few weeks before the World Championship qualifiers my manager gave me a bit of a kick up the butt, he said, “You’ve not been practicing as much as you should be.”

‘I’m usually eight hours a day on the table. It wasn’t even always the hours but the times I was going to the club. I’d get over at 1pm, 2pm, which is no good. I’m still a teenager so I wanted to stay in bed all day, get over at 1pm and play through the night, but it’s no good.

‘I’ve changed my life around now. I’m up early, shower and get to the club early and it’s just better. I lacked the discipline last season but now I’ve got it and hopefully I can improve. You feel better for getting up and getting out early.

‘I’m still starting out really, I started my first tournament when I was 15, starting quite young. I am improving and hopefully these next two years I can get in the 64, hopefully I can do it in one, then shoot up from there.’

The ‘kick up the butt’ from his manager appears to have done the trick and snapped Page out from any complacency he felt from enjoying success at such a young age.

‘I think last year I almost thought I’d made it, or I was acting like that. I was going to golf, taking half days and it was just no good and I admit that. But now I’m more disciplined so hopefully it’s going to go a lot better.’

Page has been under the wing of three-time world champion Mark Williams during his snooker journey, with the pair regular practice partners at home in Wales.

While the experience of playing with the legend of the baize is priceless, the youngster admits that he might have to turn trips to the golf course a bit more often and keep plugging away at his snooker while the veteran enjoys himself.

‘I’ve spoke to Mark a few times [since Q School], he’s been nagging me now to get back on the golf course with him for a couple of days,’ said Page.

‘When the season’s up and running, we’ll go over [to the club] at 10am and Mark will probably finish around 2pm or 3pm. It’s most of the day, he does play, but at the same time he could go weeks on end without playing.

‘It doesn’t really work for me. Last season I was finishing when Mark finished and then going to golf. Obviously I love hanging out with Mark and I still will, but I’ve got to be a bit stricter with myself on the table and I will.

‘I’ve realised now what it takes, it takes a lot of work to get anywhere near where you want to be.’