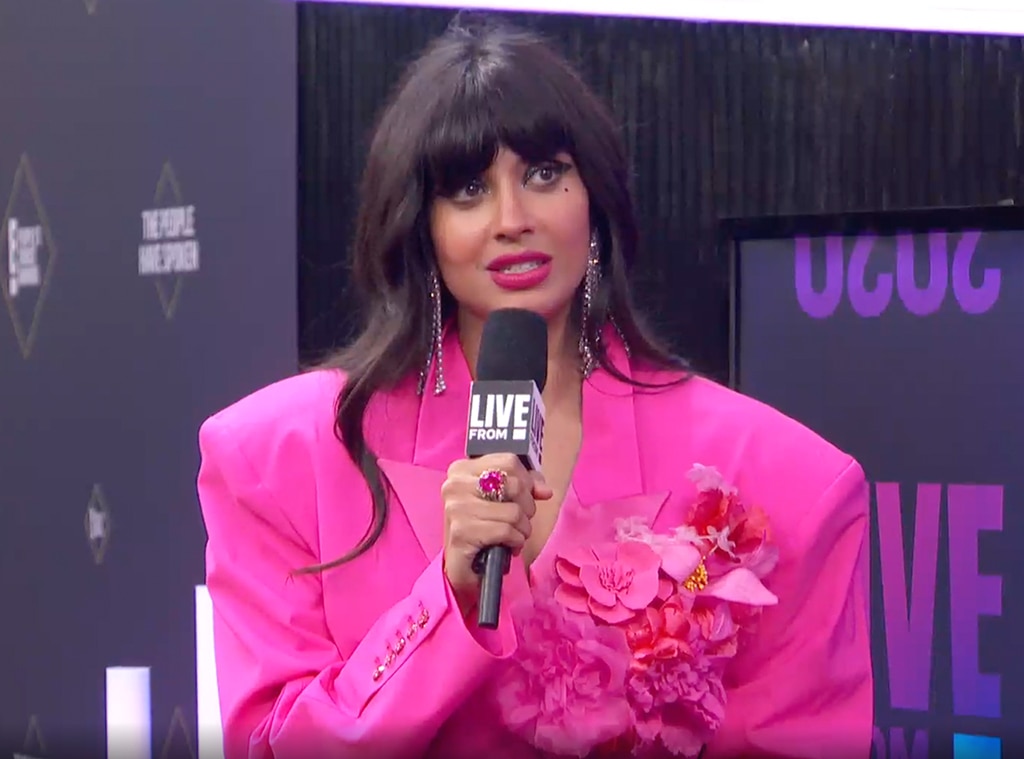 The only person better at name-dropping than Tahani Al-Jamil on The Good Place? Jameela Jamil!

The British star couldn't help but gush over her friend Demi Lovato when she dropped by the E!'s Live From the Red Carpet on Sunday at the 2020 E! People's Choice Awards.

Jamil and Lovato, who is serving as the host of the PCAs, became close after the "Sorry" singer was a guest on Jamil's PCA-nominated I Weigh podcast (though the two first met when Lovato was just 16 years old and Jamil interviewed her for The Official Chart in the U.K.).

"I used to do what you do now and I just watched her grow up," Jamil told Giuliana Rancic. "She was the…first huge female celebrity speak up and be honest about issues and talk about rehab and eating disorders and addiction. She's a big inspiration of mine. We've kind of become friends over the years, hung out and had personal conversations around shared eating disorder issues and what we find toxic about this industry."

She continued, "[Demi] came on the podcast to have a public chat and it helped so many people. She's unique superstar, going to be amazing tonight generous, funny, kind and most importantly authentic person no one is perfect. I love that she stopped pretending [when] she was in early twenties. She created this new generation of honest celebrities."

And Jamil, a double nominee at the 2020 PCAs, is one of those honest celebrities, hilariously calling herself out for talking about her friendship with Lovato when asked by a fan when was the last time she name-dropped.

"Probably one minute ago when I said I was friends with Demi Lovato!" she answered with a laugh.

Jamil's I Weigh is up for The Pop Podcast of the Year, and the star said her podcast "might be most fulfilling thing I've ever done. I want to keep going forever. I've learned so much from the podcast, that's what's cool. So many light bulb moments for me hoping it's the same for everyone else."

Chrishell Stause Debuts a Daring New Hairstyle at the PCAs

Fact-Checking The Crown: How Does It Compare to Reality?