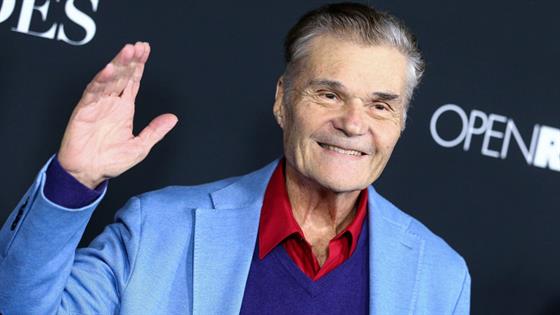 Hollywood is mourning the loss of “one of a kind” star, Fred Willard.

The iconic longtime comic actor died on May 15 of natural causes, according to his rep. “My father passed away very peacefully last night at the fantastic age of 86 years old. He kept moving, working and making us happy until the very end,” Willard’s daughter, Hope, said in a statement. “We loved him so very much. We will miss him forever.”

The sentiment is certainly shared by fans, friends and famous colleagues around the world. While he left a mark on many through his decades of work on the big and small screens, it’s clear he also made a lasting impact on those who got to know him and work with him over the years.

On Monday night, Jimmy Kimmel dedicated time on his late-night show to honoring Willard and the special continuous presence he had on Jimmy Kimmel Live, often popping up both as a guest and as various characters in skits.

“We could not get enough Fred,” Kimmel said, recalling the late Emmy nominee’s willingness to participate despite little time to prepare or rehearse. “He nailed it every time—dozens of times, up to 86 years old—he killed it. We loved being around Fred, we loved having him with us.”

“In a lot of ways, Fred Willard was like a Christmas tree in June—a little weird, familiar, but still surprising to see it, full of good memories and you’re just instantly happy that it’s there,” Kimmel described.

In addition to revisiting his many hilarious appearances on the show, Kimmel also aired touching tributes from Willard’s many other co-stars, including Catherine O’Hara, Ty Burrell, Martin Mull, Julie Bowen and Eugene Levy.

“He was a true improvisational genius and the nicest man you could ever want to meet,” Levy said. Burrell, who played Willard’s son on Modern Family, got emotional as he explained being influenced by the star’s acting style and the “beautiful irony” of Willard being cast as his TV dad.

“There would be no Phil Dunphy without Fred Willard,” he said. “On our wrap day, I tried, very poorly, to tell him how much he meant to me and how much he had influenced my career and he just smiled and said, ‘I’ll see you on the next one.’ That’s Fred.”

As Mull touchingly put it in his tribute, “Fred Willard leaves a hole that will not be filled by anybody. There was no one that could take my breath away with such outrageous and fearless leaps of originality—one of a kind.”