Remember when weather was about the most unpredictable phenomenon we had to worry about?

For Victorians scurrying back from other states to avoid lengthy spells of self-quarantine and those who stayed put, the forecast for the start of 2021 is if anything refreshingly dull. 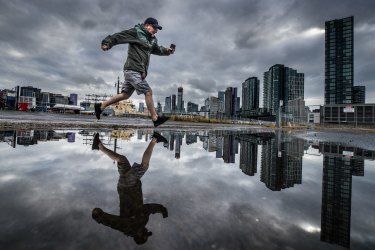 If you prefer a wet and cool summer, 2020-21 may come as a relief. Credit:Jason South

A year on from the extreme heat, drought and bushfires that greeted the start of 2020, the weather has generally shifted back to longer-term averages, Blair Trewin, a senior climatologist at the Bureau of Meteorology, said.

While final figures will be released next week, Victoria's 2020 was the mildest year for daytime temperatures in nine years. Average daily temperatures were about 0.39 degrees above the 1961-90 yardstick used by the bureau.

For Australia as a whole, 2020 was the fourth hottest on record for mean temperatures and fifth hottest for maximums. Both measures trailed the scorcher in 2019 that smashed many records.

Victoria's annual rainfall last year of 671 millimetres was back above the long-run average for the first time since 2016, and for only the second time since 2011.

As it happens, 2011 was also the last time Australia was under the influence of a strong La Nina pattern in the Pacific. During La Ninas, rainfall tends to shift westwards along the equator, pushing rainfall totals above normal levels for most of eastern Australia, including Victoria.

The bureau declared such an event to be under way in late September and "we're seeing a fairly typical La Nina signal" now, Dr Trewin said.

That means, according to the Bureau of Meteorology’s longer-term outlook, Victoria can expect odds of about 70 per cent of higher-than-normal rainfall for the first quarter of 2021.

"A few areas will miss out" but for most of the state that means rain gauges will probably be fuller than usual for these months, Dr Trewin said.

With all the cloud around, the odds favour temperatures during the days being average to even cooler than normal, except for areas close to the coast. That's true for most of the rest of Australia.

One risk, as in 2011, is for some of the extra tropical moisture around to make its way all the way south. Under the right conditions, Victoria could experience some flooding.

The relative lack of clear skies, though, will also keep overnight temperatures from dropping as much as usual.

That prediction is strong for almost the whole country too, with the exception of a portion of inland Western Australia, where few holidaymakers would venture even if borders were open.

Another feature of La Nina years is that while extra rainfall tends to keep a lid on daytime temperatures at least, heatwaves can still happen across southern Australia but without packing days of extreme heat.

Instead, "you can get more prolonged spells of moderate heat", Dr Trewin said, adding "there's no indication of any significant heat in the near future for south-east Australia".

Even though La Nina tend to be on the cooler end of the natural variation, the background warming from climate change means that even the cool years remain relatively warm on a local and global scale.

For Melbourne, the coming week's forecast is for most days to be partly cloudy with a temperature range of 14 to 27 degrees over the period. Sunday's chance of storms could bring the wettest of those days.

The damper conditions also mean fire-danger ratings are suppressed. By Saturday, all but the Wimmera, Mallee and East Gippsland will be at the lowest end of the scale for fire risk.

Still, it doesn't take a lot of heat, particularly in the state's north-west, for conditions to be dry enough to support bushfires, as shown during the burst of warmth last month, Dr Trewin said.