Liberal MP Gladys Liu says allegations against a Chinese businessman who aligned himself with the Hong Kong-born Australian politician are concerning and should be thoroughly investigated.

Huifeng "Haha" Liu, who has donated to the Liberal Party and is a former soldier in China's People's Liberation Army, is facing deportation after counter-espionage agency ASIO found he was a national security risk. 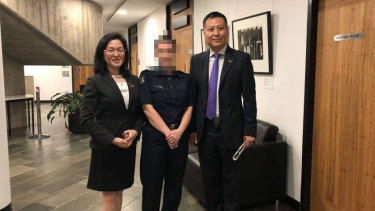 The ASIO assessment, first revealed by the ABC, has been confirmed by two security sources.

The Australian Federal Police and ASIO are also investigating Mr Liu, 52, as part of the joint Counter Foreign Interference Taskforce, the sources said.

Mr Liu attended Ms Liu's maiden speech in July 2019, watching from the public gallery in the House of Representatives. He has also appeared at a number of functions with Ms Liu, who is no relation, where she helped translate for the Melbourne-based businessman.

Mr Liu was previously the president of an Australian-Chinese neighbourhood-watch organisation, the Australian Emergency Assistance Association Incorporated (AEAAI), which was publicly promoted by the Liberal MP.

The Chinese consulate in Melbourne promised the AEAAI funding if it agreed to report back on "security risks" involving Chinese citizens who required consular assistance, an Australian government source confirmed.

Ms Liu said she would "never support a person or organisation that does not have Australia’s best interests at heart".

"I know Mr Liu in his capacity as president of the AEAAI. Outside of this we have no relationship. I have only ever recognised him in this capacity," the Victorian MP said.

"I have never received any financial support from Mr Liu. Allegations made against Mr Liu are concerning and should be thoroughly investigated." 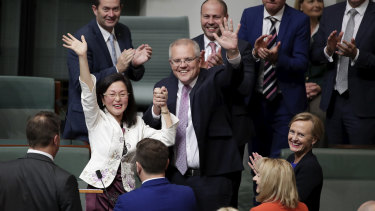 Liberal MP Gladys Liu is congratulated by Prime Minister Scott Morrison after delivering her maiden speech in the House of Representatives in 2019. Credit:Alex Ellinghausen

Ms Liu said she visited AEAAI "in support of a safer living environment" and she was not aware of the allegations against the businessman until they were raised by the media.

The Hong Kong-born MP has previously come under criticism from Labor and foreign influence experts for failing to disclose her membership of Chinese government-linked associations. But Ms Liu became increasingly outspoken last year about China’s crackdown on pro-democracy activists in Hong Kong.

Mr Liu has been photographed at functions alongside Mr Sukkar as well as former prime ministers Tony Abbott and John Howard. Mr Sukkar's office also sent Mr Liu a Christmas card thanking him for his "friendship and support" in 2017.

Liberal Party sources said Mr Liu was not a party member but was known within party circles for trying to ingratiate himself with senior members of the party.

Opposition Leader Anthony Albanese said the federal government should investigate the links between Mr Liu and the two Liberal MPs.

Asked how Prime Minister Scott Morrison should respond to the allegations, Mr Albanese said "by taking them seriously, which is what they haven't done up to now".

"Clearly, the Liberal Party needs to explain the connections which are clearly there and why it was that a senior minister of the Crown seems to have a relationship with this gentleman," he said.

Senior Victorian opposition frontbencher David Davis said he had never met Mr Liu and he did not know if the Melbourne businessman had donated to the state branch of the Liberal Party.

When asked if Mr Liu had links to his state colleagues, he said: "Not to my knowledge, but I simply don't have an informed answer on that."

This masthead has been unable to contact Mr Liu but he told the ABC: "I've done nothing wrong or against Australian law."

"The decision to revoke my visa was extremely unfair," he said.