Australia Post has called for Christine Holgate to make public her contract settlement demands as the legal stoush between the parties escalates ahead of a looming mediation deadline.

Ms Holgate’s lawyers have threatened to sue Australia Post over its handling of the Cartier watches saga, which resulted in her resignation as chief executive last year, laying down a deadline of 5pm today to mediate “in order to avoid time-consuming and costly litigation for all parties”. 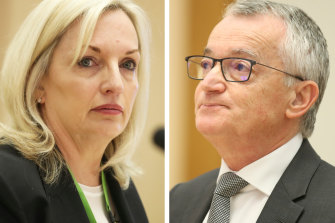 With just hours until the deadline, the parties are locked in a dispute over the terms of the mediation, prompting a flurry of legal missives between the warring sides.

Australia Post toughened its position on Wednesday morning, issuing a statement that urged Ms Holgate to make public, after the mediation is concluded, any financial compensation or other remedies she sought.

“Given the public interest in this matter and Australia Post’s wish to be transparent about it, we have asked that Ms Holgate agree that following the mediation the parties will make public what she asked Australia Post to give to her to settle the dispute and also the outcome of the mediation,” Australia Post said in a statement.

Ms Holgate’s legal team – led by high profile lawyer Rebekah Giles – were outraged by Australia Post chair Lucio Di Bartolomeo’s evidence to a Senate inquiry that the company had “no idea” of the claims the parties were supposed to be mediating.

“They wanted us to start mediating last week – we didn’t because none of those details are on the table. We have no idea what we would be mediating on,” Mr Di Bartolomeo told the inquiry on Monday.

The Holgate camp argues the details were outlined in an April 21 letter from Ms Giles to the Australia Post board, which stated the mediation would “cover all issues concerning our client”.

The letter said the matters to be traversed would include “the treatment of our client in her employment as the chief executive officer of Australia Post, the circumstances of her employment coming to an end, defamatory statements made of and concerning our client, breach of duty of care and the tortious interference with our client’s contract of employment with Australia Post”.

Ms Holgate resigned from Australia Post on November 2, 10 days after disclosing to a Senate estimates hearing that she had spent $20,000 on Cartier watches as bonuses for four senior employees for landing a major banking deal.

She alleges she was forced out of the top job after she was illegally stood down by Mr Di Bartolomeo in breach of her contract amid pressure from the federal government. Mr Di Bartolomeo has insisted she reluctantly agreed to stand aside for an investigation into the purchase.

The Cartier watches saga was preceded by a string of revelations last year that plagued Ms Holgate’s leadership. These included her office spending $300,000 on the CEO credit card in 2019-20 and splurging $3000 a day on a reputation manager at the height of the pandemic amid complaints about delivery delays.

Ms Holgate also urged the board to pay out more than $7 million in bonuses to executives last year and came under fire for Australia Post’s intervention on behalf of Senator Pauline Hanson when the City of Melbourne refused to deliver One Nation stubby holders to public housing tower residents.