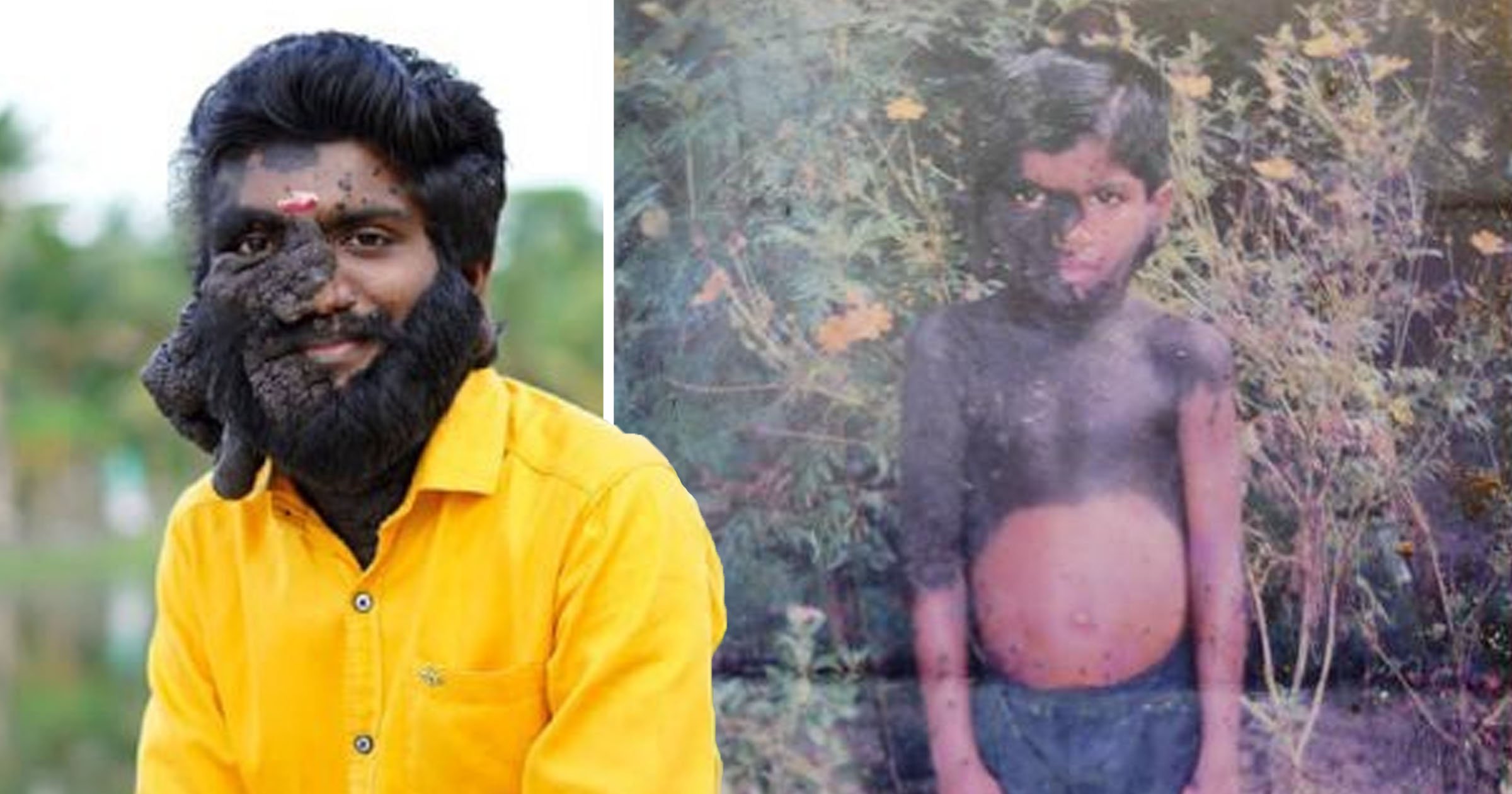 A man who was born with moles covering 80% of his face has shared how cruel trolls bullied him and called him horrible names.

Prabhulal Prasannan, a 24-year-old student from Kerala, India, was always the centre of attention growing up because his distinctive appearance was well-known throughout his local town.

Strangers stared at him and whispered, and children would look visibly afraid. When Prabhulal started school, he would sit alone at lunch time because other children were scared of the way he looked and would bully him relentlessly.

Prabhulal was once followed by a group of kids while he was at a science fair. The kids wouldn’t leave him alone and kept asking him if he had ‘dung’ on his face. Prabhulal says that even some of his teachers would keep their distance from his when he was a child.

‘When I was born, outside of the hospital was crowded with people who wanted to see “the different child”. In a way, I have been a celebrity all of my life,’ says Prabhulal.

‘During my childhood and adolescence, I went through a lot of heartbreaking experiences.

‘In class I had to sit alone on a bench with no one around. The other kids were scared to sit next to me and I had to stand alone when everyone else was playing together.

‘I was afraid to get on the bus to go to school for fear that I would be bullied.’

The constant taunting and a perpetual fear of being mocked lead Prabhulal to live in a world of relative isolation. He withdrew from his friends and social life and even asked God why he had to be born the way he was.

‘Whenever I went to the temple for a festival or to a wedding or any public event, I was constantly fearful of being mocked in front of people and so I lived in a world of isolation, fear and ridicule,’ he says.

‘When I left school, I went to college with the expectation that things would be different. I thought that because the children were older that they would understand me.’

He hoped starting college would change things, but on his first day he experienced students screaming and running away from him.

In his darkest moments, Prabhulal even considered ending his life.

‘I thought to myself, “is my birthmark destroying my dreams of studying, getting a good job, supporting my family, traveling, inspiring others and helping those in need?”

‘I was mistaken in thinking that society would change their mind about me when I grew up.

‘I realised that the misconceptions that exist in society do not change by themselves and that we must bring about that change ourselves.’

Prabhulal realised he was never going to change other people’s opinions of him, but he could change how he felt about himself. He decided he was no longer going to hide his face away or be ashamed of who he was.

Posting pictures of himself and his birthmarks on social media for the first time in 2017, Prabhulal soon had dozens of comments from strangers who said he was an inspiration.

‘I decided that I was not going to hide my face away anymore but instead, try and change people’s perceptions by showing that despite looking different I am just as capable of achieving my dreams,’ he says.

Prabhulal’s moles have continued to grow throughout his life and he has researched the point of possibly having them surgically removed. However, doctor’s have said that the extent of the growth, especially on the right side of his face, makes such surgery a significant risk.

For now at least, Prabhulal is happy to show off his moles and hopes that he can inspire others to believe that beauty comes from within.

‘Those who used to make fun of me before now speak proudly of me,’ says Prabhulal.

‘We must decide how others will view us and so I decided that people would no longer look at me with sympathy but with pride.

‘My black moles are my identity.

‘I have learned to love my identity and I realise that I am unique in this world.’

Do you have an inspirational story to share? We want to hear from you.

Get in touch: [email protected]