By almost any measure the drought in the Western states this year is about as bad as it gets — perhaps the worst in modern history. A severe lack of rainfall over the past two years, combined with a steadily heating climate, has turned California into a tinderbox, setting the stage for what will likely be a catastrophic fire season ahead.

This comes on the heels of the worst fire season in recorded history in the West, setting a new bar for what seemed possible. In 2020, more than 8 million acres burned, with California and Colorado experiencing their largest fires ever.

That’s why it’s startling to see the comparison between last year’s relatively modest drought and this year’s record-setting drought. Drought conditions this time last year are a blip on the radar compared to where we are right now. 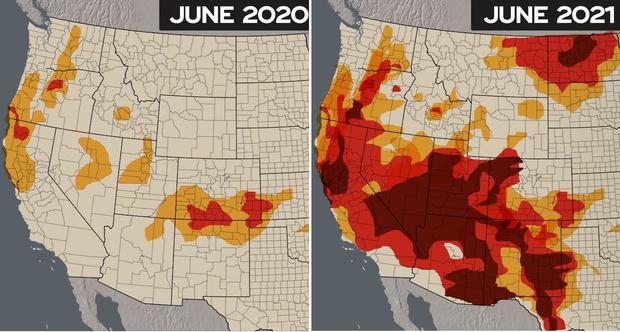 The orange in the above map represents severe drought, the red is extreme drought and the dark red is exceptional drought. A total of 72% of the West is blanketed in one of these three categories and more than one-quarter is in exceptional drought — the highest category.

Over the past 20 years, the coverage of exceptional drought has never surpassed 11%. Right now it is a staggering 27%. 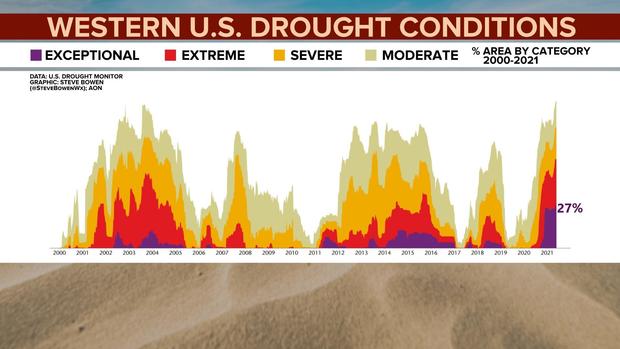 The escalating drought has severely dried out vegetation weeks before fire season really kicks in. The energy, or fuel, available to feed fires, technically called the Energy Release Component, is at a record level for this time of year.

In the chart below for the Central Sierra mountains of California, the blue line represents the current energy available for fires, and the red line shows the previous highs. 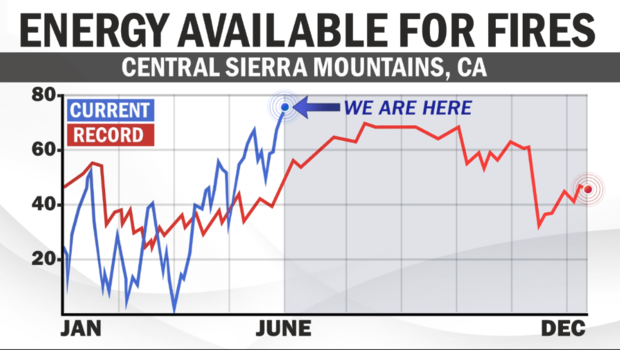 Although it appears that our current level is a record for all time, not just for the date, that needs some context. The data plotted for the Central Sierras only spans the last year, so incorporating more years would likely show that the current amount of available energy is indeed a record for the date, but not for the entire fire season.

Fire season in the West traditionally ramps up in the summer and maximizes in the fall, but this season we have already seen numerous fires in the region. The Fire Weather Research Laboratory at San Jose State University says that vegetation moisture is so low that critical fuel moisture may be reached as early as this month.

Fuel moistures around the state are still tanking. In the south Bay Area, FMCs are now 86%, ave = 108%, and low=105%. At this rate, we may reach critical FMCs in June/July. #CAwx #FireDanger #CAdrought pic.twitter.com/OkrJdASMR8

This year’s drought is being caused by two factors: low rainfall the past two years and, over the longer term, human-caused climate change.

The decreased rainfall is due to a cool episode of La Niña in the tropical Pacific Ocean. La Niña often shifts the jet stream, or storm track, further north, bringing more rain to the Pacific Northwest but starving California and the Southwest of moisture. As a result, many areas of Northern California and the Sierra Nevada are experiencing rainfall deficits of well over a foot, with pockets of the mountains near Chico, just northeast of Lake Oroville — an important reservoir — registering a remarkable 4 feet below normal just since October.

California’s water deficits for just this water season are astonishing. All areas in dark brown are missing at least 1 foot of precipitation since October 1st. In the Northern Sierra above Lake Oroville (one of the wettest places in CA) water deficits are as high as 5 feet! #CAwx pic.twitter.com/1WUAnUbkiO

Adding to the water stress is a very early melt off of the snowpack in the Sierra Nevada range, which is an important contributor to lake and reservoir levels in the state, typically helping California with its water supply during the dry summer months. This spring the snow melted off at a near record pace, two months earlier than normal across the state, now at near zero levels.

The result is a reservoir system under extreme stress, with little hope of meaningful rainfall since the dry season is underway. The below graph from University of California, San Diego shows just how low both snowpack and reservoir levels have been this year as compared to the years 2000-2015. 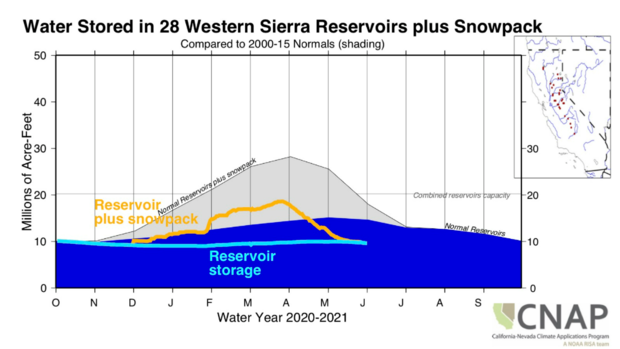 One of the most important reservoirs for water supply, hydropower and summer recreation is Lake Oroville, near Chico, California. Because of low water levels, officials have had to shut down boat ramps, and if the water drops much lower they may have to stop hydropower.

Facing a precip deficit of > foot in much of N CA since Oct alone, in some cases a few feet NE of Oroville, and early snowpack melt (most run-off stolen by thirsty ground) the lake is way down w/ consequences to water availability, hydropower & recreation. https://t.co/WJSPa1hIWL pic.twitter.com/axtnexWjr9

This is what Lake Oroville looks like from space, compared to two years ago when the lake was near full capacity due to a much wetter winter.

⬇️@CopernicusEU #Sentinel2 🇪🇺🛰️images of Lake #Oroville acquired on 3 June compared with an image from the same period in 2019 (when it was near full capacity) pic.twitter.com/Lnv0YdHNm1

While natural swings in weather from phenomena like La Niña and El Niño account for most of the year-to-year variation in lake levels and the dryness of vegetation, over the long term, in the background, is the impact of human-caused climate change.

A 2020 study found that the current Western drought, which started in the year 2000, is now a mega-drought — the second worst in 1,200 years. The authors say at least half of this drought can be blamed on a heating climate.

The burning of fossil fuels releases greenhouse gases, which trap heat and warm the planet. Globally the planet has warmed around 2 degrees Fahrenheit since the 1800s. But certain regions, like the southwestern United States, are warming much faster. 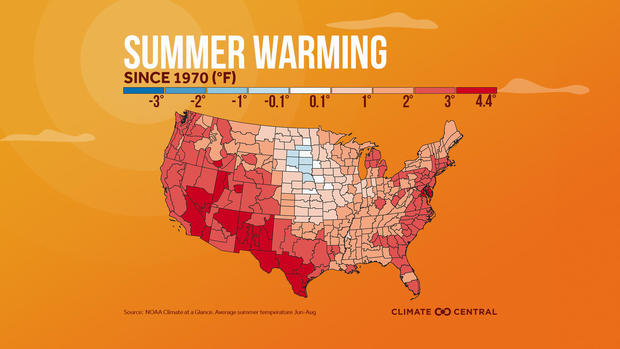 Warming temperatures are evaporating more moisture from the ground and more quickly melting snowpack, which is decreasing in the West. This means fuel for fires gets drier more quickly during the spring, setting up for longer and more ferocious fire seasons in the Western states. Since the 1980s, the fire season in the West has expanded to be 2 to 3 months longer than it once was.

So while drought and fire seasons in the West will vary year to year based on shifts in weather patterns, as long as humans keep warming the planet, these extreme events will continue to get progressively more intense — a calling card of climate change.