Joy Behar, meanwhile, exclaimed the rioting forced “a lot of people to see the reality of the situation I’ve been bitching about for four years.”

Meghan McCain joined her more liberal cohosts in issuing an angry response to the riots in Capitol Hill Thursday morning on “The View.”

The first to speak after moderator Whoopi Goldberg gave viewers the most recent information about the violent siege in D.C. on Wednesday, McCain called the day’s events “one of the great national tragedies of my lifetime.”

“This is one of America’s darkest days. I have been absolutely despondent watching this,” she said, before saying it’s a good time to “take a very hard look at where we are as a country and where we are with President Trump.”

“[Trump] is clearly a president who has turned into a mad king, and at this point, I’m calling on all Republicans and conservatives who still have clout, we have to invoke the 25th Amendment,” she then pleaded. “We cannot withstand this. Our country cannot go on like this. And we cannot possibly risk the idea that we could have more violence between now and President Biden getting elected and inaugurated.”

Getting even more angry as she spoke, McCain then slammed the “bastards” proudly holding the American flag while “attacking our own republic.”

Celebrities React as Trump Supporters Storm the Capitol: 'Horrific,' 'Stupid,' 'Lock Them Up'

“The same flag that veterans at Iwo Jima held after World War II. You are not patriots, you do not represent America. You are the scum of the earth who are using and abusing and bastardizing all that I love and have grown up with for your own sick agenda and that agenda has been directly sent by President Trump,” she continued.

McCain went on to criticize Trump’s response to the riots, after he took his time to discourage violence while also saying he “loved” his supporters and called them “special.”

“Ivanka Trump called these people patriots. I am a patriot. I come from a patriotic family. I come from a family of service, as does everyone on this show,” she exclaimed. “You are hurting our country, you are becoming a national embarrassment and we have to get him out immediately because this cannot stand.” 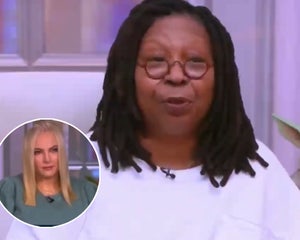 During the rest of the open, Goldberg called the rioters “domestic terrorists,” before saying the unrest “all stems from [Trump’s] fingers.” Joy Behar, meanwhile, called the day a long-awaited eye-opener for conservatives.

“I feel that the events of yesterday were like a pimple popping. It brought a lot of people to see the reality of the situation I’ve been bitching about for four years,” she said. “This has taken the Republicans four years and a violent outbreak to come to their senses. The good news is, and let’s start here, I’m so happy that the Democrats are in charge now.”

“The whole ugly demonstration showed you that the police are capable of restraining themselves,” she added. “They know how to do it. You saw it. Not only that, many of them enabled these insurrectionists to go into the Capitol and endanger the life [of lawmakers].”

Sunny Hostin also called attention to the difference in police response to the violence in the Capitol and Black Lives Matter protests.

To the Republican lawmakers finally standing up and saying enough is enough, she added, “I don’t think at this point they get credit because they have poured gasoline on this flame for four years.”

Watch their reactions to the violence below: