From the moment Premier Daniel Andrews told the hotel quarantine inquiry on Friday that his health minister, Jenny Mikakos, was accountable for what had gone wrong in this botched program, her resignation was inevitable.

Andrews did not even try to defend the way it had been run or the ministers entrusted with doing so. He agreed that decision-making had been slip-shod, "disappointing" and that there had been a collective failure to take responsibility. 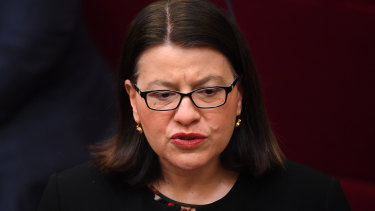 He also said that, even though Mikakos and her department had been in charge since shortly after the program began in March, there had been far too much concentration on its logistical aspects – security, the provision of food and rooms – and far too little on its potentially devastating health consequences.

Relatively junior health officials wrote warning after warning about this – the first on April 9, within a fortnight of the program beginning – but it was not until June, when COVID-19 had broken out of the hotels and into the suburbs, that anybody started paying attention.

In the inquiry on Friday, it was put to Andrews that, from the start, there should have been "a much greater focus on clinical matters and greater involvement of medical clinical expertise". He agreed without demur.

He also agreed that a workforce appropriate to the task – not ill-trained, ill-equipped, casually employed subcontract labour in the form of security guards – should have been on site.

And asked if he thought the program had been in desperate need of a "clear line of control and the actual active exercise of that control" by the accountable agency (in this case, the Health Department), he said, simply: "Yes".

"Isn't that the answer?" said the counsel assisting, Rachel Ellyard. "Isn't that what went wrong? The
absence of those three things?"

In her resignation statement, Mikakos said there were elements of Andrews' evidence to the inquiry that "I strongly disagree with".

But for all the pertinent months, from late March to early July (when responsibility was removed from the Health and placed with Justice) it was Mikakos and her department who were ultimately in charge of preventing the virus from infecting hotel quarantine staff and escaping into the community.

It was the health component of a health pandemic, and they did not pay sufficient attention to it.

Mikakos' departmental secretary, Kym Peake, had earlier in the week blithely told the commission that there were a number of key points in this process where she had not briefed her minister, and that her minister had not sought to be briefed, or asked questions. Mikakos did not even have a copy of the operational plan for Soteria, the code-name for the program.

This suggests a serious lack of curiosity. For example, the bulk of Melbourne's second-wave cases escaped from the Rydges hotel – the "hot hotel" which took all the infected passengers from the Greg Mortimer cruise ship and put them in one place. Mikakos' department put no extra health measures in place at that hotel despite the level of infection.

Only after the hotel outbreak had occurred was a specialist team from the Alfred hospital brought in to, in Mikakos' words, "provide a governance model for the hot hotel".

And even then, when shutting the gate after the pandemic had bolted, Mikakos told the inquiry, "I don't recall particular risk factors being identified" by her department.

Should they have thought of it earlier, perhaps? " I don't know whether people were particularly considering using the Alfred earlier. That would be questions that would need to be put to officials of my Department."

Mikakos sought in her resignation to blame the department for some of these things.

But a minister is responsible. It's the foundation upon which our system of government is built. And in this case, she had little choice to, finally, take responsibility and resign.