At the Liberal campaign launch in 2019, Prime Minister Scott Morrison promised to help first home buyers. With just six days until election day, it was his first remotely memorable policy announcement of the campaign: “When you give Australians a go, they will get a go and they will have a go.”

This was close to gibberish – but the meaning could be easily deciphered, because of how snugly it fitted the rest of Morrison’s campaign. His headline promise was that nothing had to change, but this abstract pledge was anchored by a weighty topic: money, and specifically the idea that then opposition leader Bill Shorten would take it from you. Even when the campaign seemed to drift to other topics, like climate, it quickly returned to money: how much would Labor’s climate plan cost? Morrison’s housing announcement was just another way to make the same point: he would give money to hard-working voters, not snatch it away and smash their dreams. 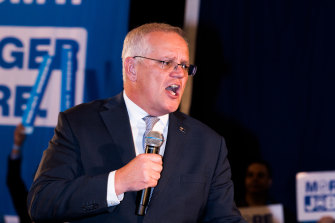 Out of that campaign was born the legend of Scott Morrison, great campaigner. Those traits are now on show again: his talent for photos and his ability to repeat his lines. In this narrow sense, he is still a good campaigner. But is Morrison having a good campaign? Recall the political consensus just weeks ago. Labor was a long way ahead. Voters were frustrated with Morrison. He called a six-week campaign in the belief he needed that time to prosecute his message.

The past three weeks have been anything but focused. Days were spent on the Liberals’ Warringah candidate Katherine Deves. Then came the Solomons issue. Then a fight about climate change on which Morrison had as much to defend as attack. He had a clear run the first few days; since then, it has been messy.

The common explanation for this messiness is the absence of any large policy contests; perhaps charisma, too. Both are true, but a broader way of thinking about this is an absence of an essential political skill. Neither Morrison nor Labor leader Anthony Albanese has the ability to make himself the centre of political gravity, dragging the national debate into his orbit. Neither sets the agenda.

In 2019, Shorten dictated the topics; Morrison’s skill was in taking those topics and using them for his own ends. Or to use another metaphor: if Shorten set the river flowing, Morrison was the expert dam-builder, diverting the flow to where it would do him most good. 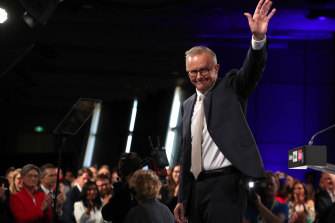 It is no surprise, then, that Morrison had his only sustained moment of strength in this campaign off the back of Albanese’s early mistakes.

Because Morrison has no definite political character of his own – no beliefs he is ever truly willing to fight for – he is forever responding, to either his opponents or events. I wrote two weeks ago of the problems with Albanese’s small-target strategy.

There is, however, one great benefit. Without an opponent to simplistically position against, Morrison has struggled to define himself. The formula this has led him to is almost aphoristic in its vagueness: he is known while his opponent is unknown.

This type of binary is Morrison’s expertise. Labor has lately learnt to avoid giving Morrison the material he needs to create these binaries, and not always simply by disappearing. Take China: Labor has always struggled to avoid playing into the strong/weak binary Morrison seeks to create. But when the Solomon Islands agreement was revealed, Labor instead came at it obliquely, casting it as a question of relationships with our neighbours. This is now what is happening on the economy: the question has moved away from the simple divide of strong economy or weak, more jobs or fewer, to take in cost-of-living, wages, and interest rates.

There is now an agility, too, that was lacking in the early days of Labor’s campaign. Labor did not merely attack on the Solomons issue; it announced policy. Off the back of last week’s inflation figures, there may well be an interest rate rise; at Labor’s campaign launch on Sunday, Albanese made an announcement about home ownership. This timing meant that, as with Morrison’s home ownership policy at his launch in 2019, the announcement was less about Labor’s strength than its opponent’s weakness (on cost-of-living).

This symmetry should be no surprise, because Albanese, like Morrison, depends on being given material rather than creating it himself. The two men are like mirrors facing each other, constantly bouncing light back and forth. Labor’s launch on Sunday felt solid, perhaps even a little better than that, but the most notable fact is that Albanese’s best lines, his most passionate passages by far, were about Morrison’s failures.

None of this means that Morrison cannot or will not win. It depends on the starting point of this campaign, its fundamental architecture, which nobody seems sure of. Are people irretrievably sick of Morrison? Or is the most important fact that we are a conservative country, not just politically but in our attitude to change, and without a charismatic Labor leader we will not make the jump?

Whichever it is, nothing in this campaign so far is likely to have changed the equation. Morrison is having a better campaign than Albanese and has made up ground – but he is certainly not having the excellent campaign many thought necessary. If it is accurate to say he started well behind, and needed everything to go right, then he cannot afford the second half to be like the first.

Cut through the noise of the federal election campaign with news, views and expert analysis from Jacqueline Maley. Sign up to our Australia Votes 2022 newsletter here.