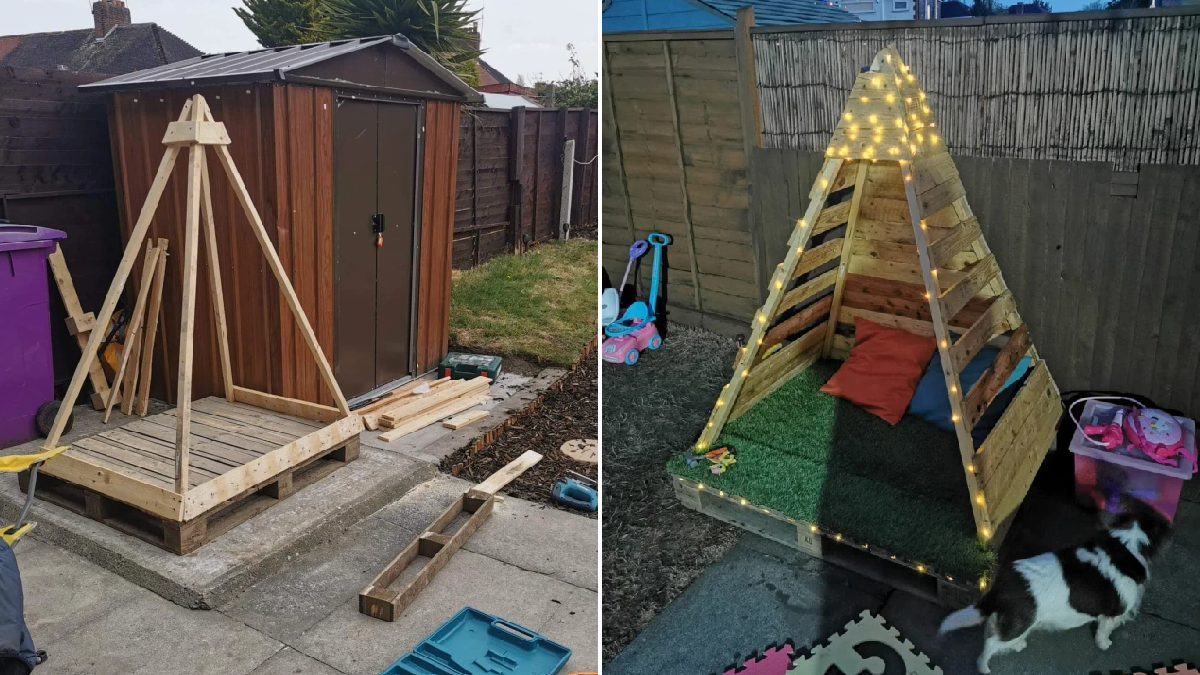 A woman has created a unique garden feature by building her daughter a gorgeous teepee – and saving a fortune in the process.

Emma Hughes, 32 from Liverpool, who works as a project manager for an IT company wanted to treat her little girl to something special, and give her a special space to play in the garden.

‘I love to do DIY and I just moved into a new ex-military home with my husband and baby daughter. It has a large garden so I was excited to get started on some projects,’ says Emma.

‘I have a low budget, but I wanted to make something for my baby girl to be able to play in, where she could also have shade to sit and eat lunch in the sunshine.’

While doing some research online, Emma came up with her original idea.

‘I Googled “Home DIY projects” and noticed there were lots of different teepees in the search results. That inspired me to give my own teepee a go,’ Emma told money-saving community LatestDeals.co.uk.

‘I didn’t have a design that I followed, I just looked at a picture and went from there.’

Emma was able to source a number of bargains from Facebook Marketplace.

‘I managed to pick up five old pallets from Facebook Marketplace, which were free to collect. I also got off cuts of artificial grass free of charge,’ she says.

‘Some of the other parts came from various stores, but they didn’t come to much overall. I got four two by two batons from B and Q for the frame, and they cost £3.95 each. I also got copper wire solar lights from Amazon for £8.99.’

Once it was time to build, the whole process was surprisingly simple.

‘I sanded down the best pallet I had, that wasn’t broken, and filled in the gaps to use as the base. I then made the A frame, and this was the hardest part as I didn’t know what I was doing – I had to just figure it out,’ says Emma.

‘When it was assembled, I attached the A frame to the base with wood screws. I then split the other pallets for wood, cutting and placing them as panels in an arrangement I liked.

‘The next step, once everything was screwed in, was to sand everything down. Finally, I used burnt linseed oil to treat the wood. I already had this product in my shed, but it only costs around £4 on Amazon.’

Finally, Emma added some finishing touches to make the teepee sparkle at night.

‘I attached the copper wire solar lights around the frame to complete the look, and it was done,’ she says.

‘I loved doing this project, and my husband, daughter and dog all love it too. It’s a good thing I know how to do it, as now my nephew wants me to make him one so I’m starting all over again!’

Emma also realised that she made some great savings by building the teepee herself.

Do you have a story to share? We want to hear from you.

Get in touch: [email protected]