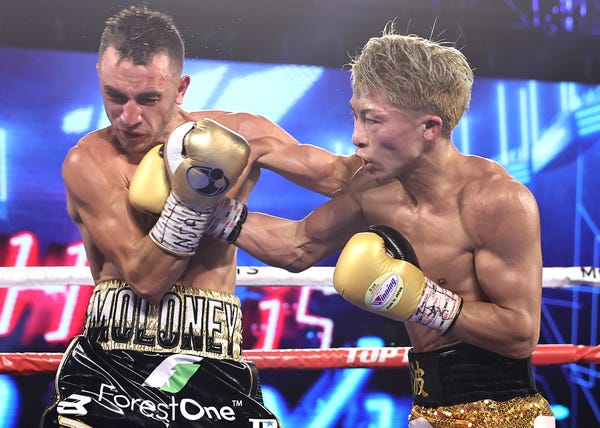 Naoya Inoue scored a brutal knockout on Halloween, thumping Jason Moloney in the seventh-round of a Top Rank-promoted event in Las Vegas.

One of the best boxers in the world today, Inoue entered the MGM Grand bubble one year after his last outing — one in which he won and claimed the World Boxing Super Series bantamweight championship.

Against Maloney, he went to work straight away, hitting the Australian with head-popping uppercuts, body-bending straight rights, and a counter left hand which floored Maloney in the sixth round.

In the seventh, the finish came when Inoue cracked a precise right into Maloney's face, which buckled his body, weakening his legs, and left him down for the count.

Maloney attempted to rise as the referee Kenny Bayless counted over his body but he could barely get to his knees before dizziness overwhelmed him.

It was all over. Inoue had won.

Inoue advanced his professional boxing record to 20 wins unbeaten (17 knockouts) with the win, and said: "The final punch, the finishing punch, I'm very happy and satisfied with that punch."

Top Rank founder and CEO Bob Arum said: "The Monster is a special fighter. I haven't seen a young fighter like that in a long time. And credit to Jason Moloney for fighting like a warrior. He gave it his absolute best."

"I have the WBO belt now, so let's make that fight happen. I want Terri Harper next."