“I call this one ‘losing an argument to the voices in my head,’” says Natalie White, gravitating toward one of her large fabric-based paintings hanging on the walls of Freight+Volume in the Lower East Side. “There was literally an argument happening in my head, between two of my friends that weren’t there,” White continues to describe of the piece, marked with bleach and included in her solo gallery exhibition “The Bleach Paintings.” “But, you know, I started to go a little bit crazy during the lockdown.”

A year ago, White was settling into an art residency run by Freight+Volume cofounder Nick Lawrence in Provincetown, Mass. White had just flown in from Mexico, where she spent the early days of the lockdown; before that, her gallery show in Brooklyn had been open for only two days when New York shut down. (She was grateful that the gallery at least had plenty of windows, for outside viewing.)

In Provincetown, White was unable to access her usual art materials, and art stores were closed; the wait time to have oil paints or acrylics delivered was weeks or months out.

“I started going insane by not being able to have a creative outlet. I had all of this time on my hands inside. And so I looked around the house,” says White. “At the place I was staying, there was bleach, and there were bedsheets. And I was like, well, I think I can do something with the two of these.” 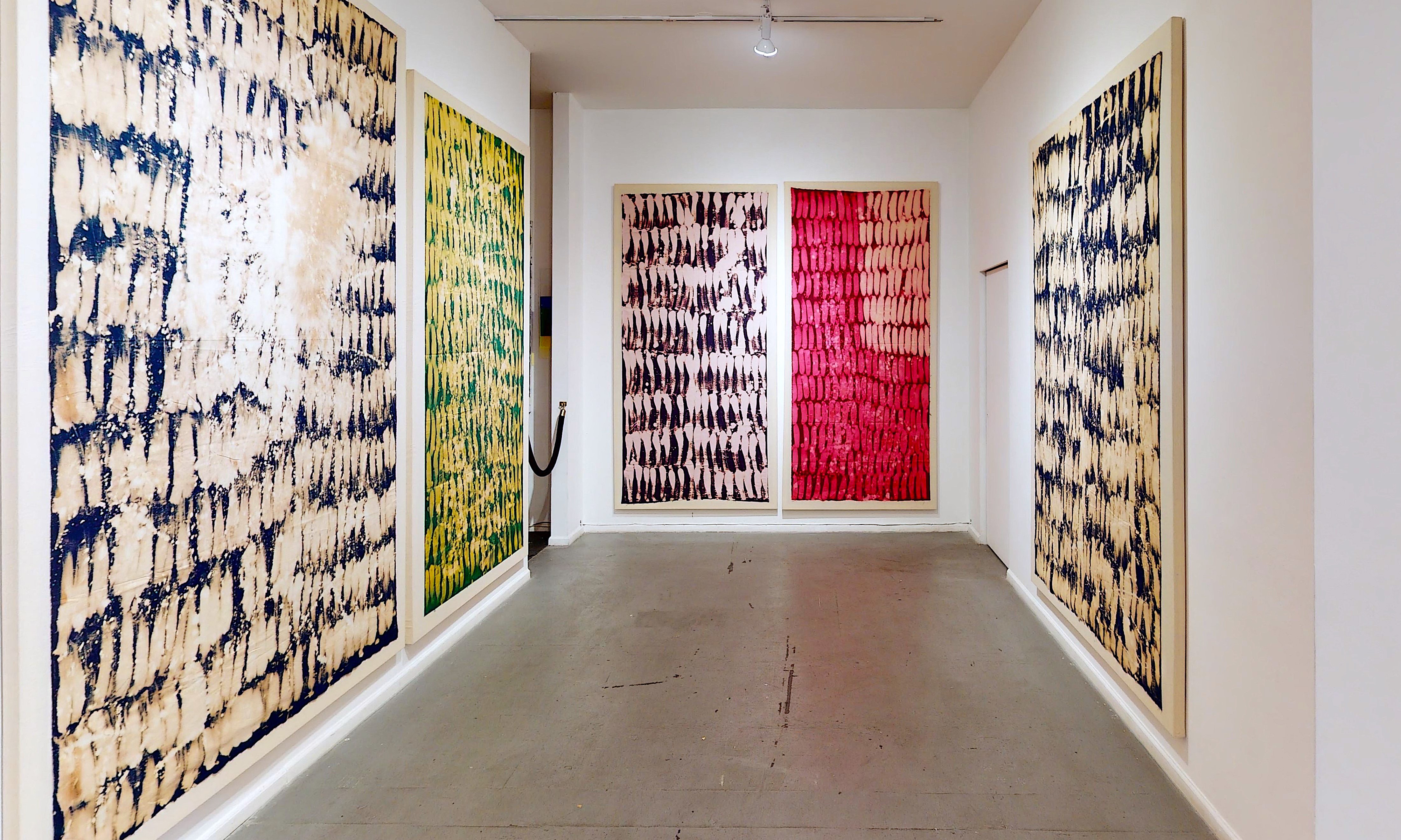 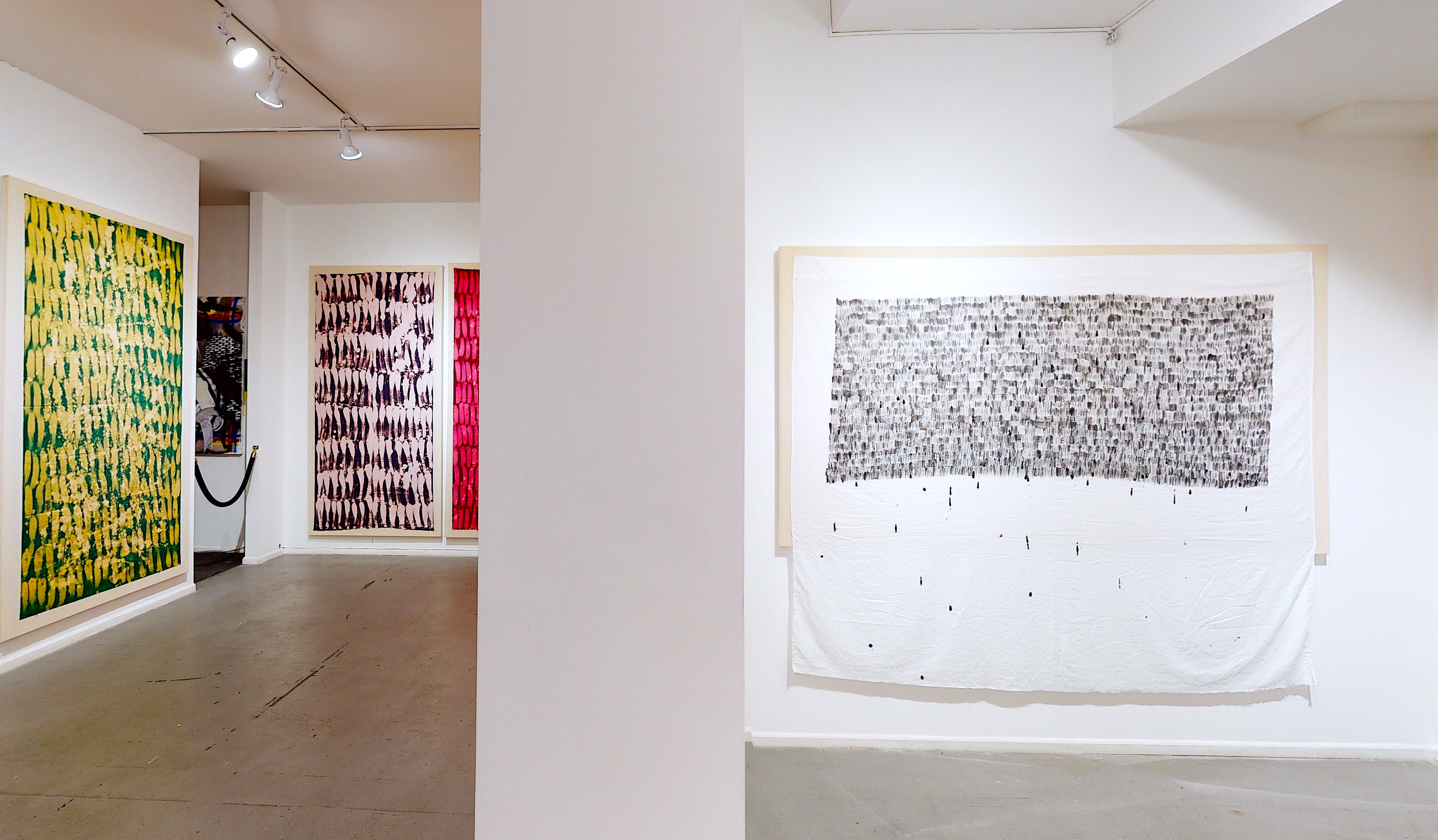 She duct-taped a bed sheet to the wall, and began painting tiny, repetitive marks on the fabric with the bleach. “I call these ‘the confinement paintings,’ because I feel like I was just marking the time,” she says of her early explorations. “I found it really therapeutic and a way to get my energy out.”

After awhile, she began applying bigger brush strokes — she refers to those subsequent works as her “energy paintings” — and moved away from using bed sheets when she located a local fabric store open by appointment. “I had no more bedsheets. I was sleeping on a bare bed with just a comforter. I even used the pillow sham,” she says

Although she felt isolated from her typically extroverted lifestyle while in residency, she credits the downtime for pushing her to expand her practice. In recent years, White has focused her creative energy on promoting the Equal Rights Amendment; in 2015 she walked to D.C. as part of a performance piece and painted “ERA” on the steps of the Capitol Building, and launched the Equal Means Equal campaign in 2019 with a large flag work.

“I would’ve never thought to make work like this,” says White of experimenting with bleach while in lockdown. “I would’ve never had the time to actually sit down and get into the studio and go in every day.”

She made about two works per week, initially not thinking in terms of a gallery show; she wasn’t sure if she would ever show them. (And, in the beginning, catastrophic thinking led her to wonder whether there would even ever be another gallery show.) That uncertainty about how things would turn out extended to her work; White was never certain what color the bleach would render on the fabrics. When applying bleach to black fabric resulted in golden brown marks, she pivoted to depictions of galaxies, using bottle tops found around the studio to create planets and suns and moons amid the celestial gold splatters. On the opposite wall, she describes the sparse pink markings on bright purple fabric as being “alien morse code” (and were partially the result of an accidental bleach spill on a spool of fabric.) “I was in the galaxy creating phase and then I was like, well, what, would the galaxies say?” she says. 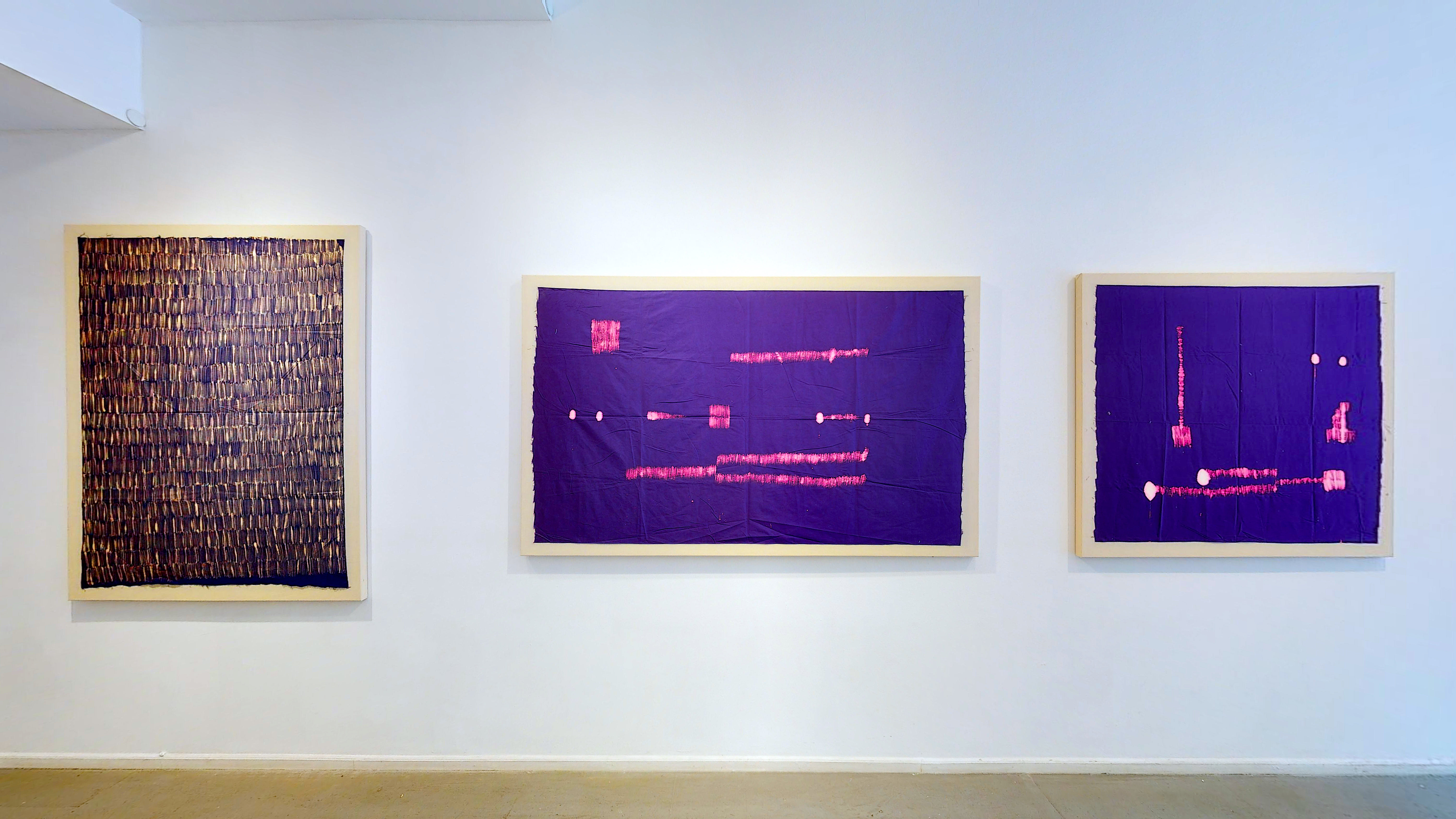 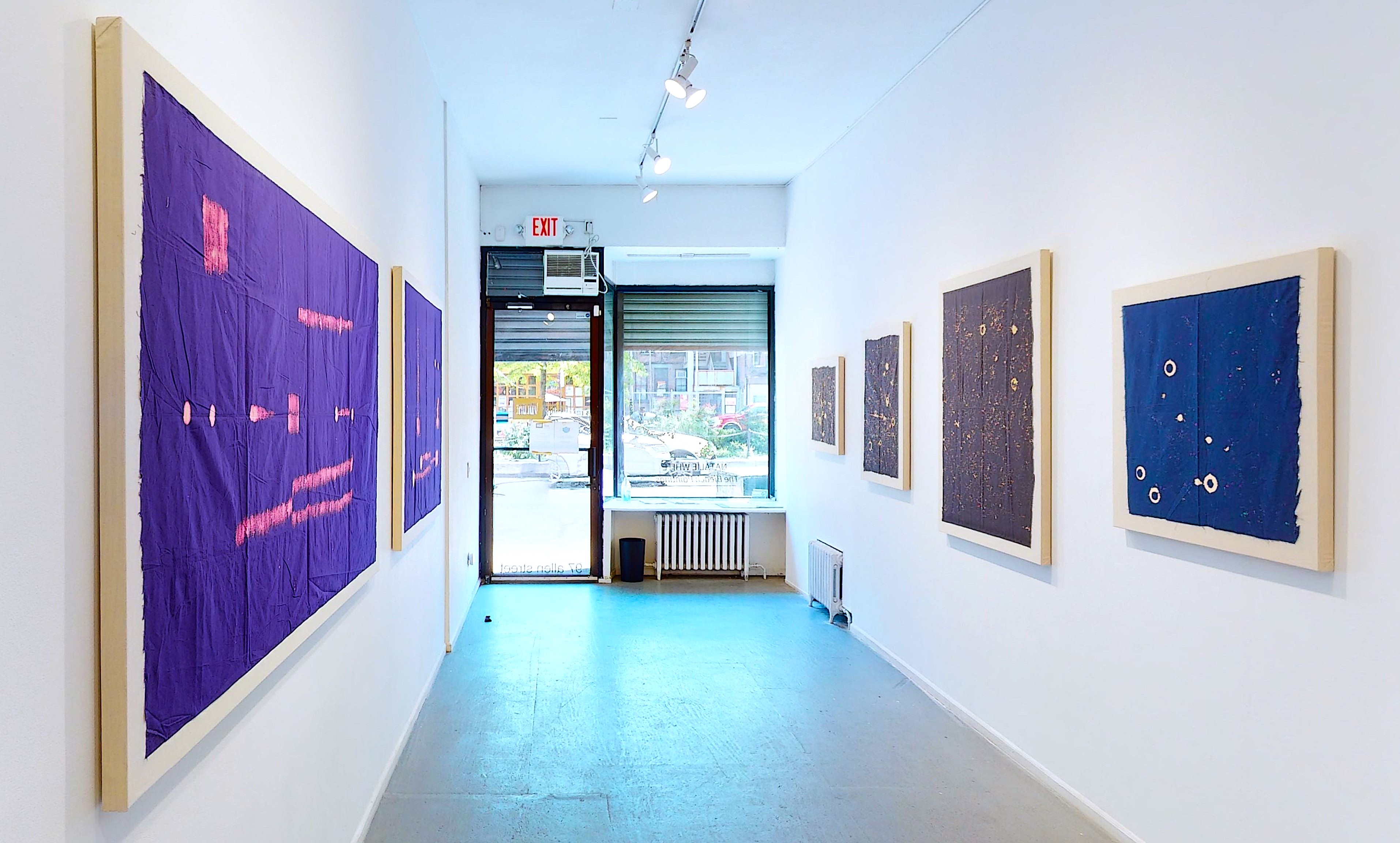 “I’m looking around and I’m seeing things that just came out of my brain,” she says. “I have no idea what these are about. This all came from my subconscious. There was no forethought, no forethought at all. It was just about doing it.” And maybe that’s what the work is about — enduring uncertainty, making presence tangible through the gesture of art.

The works were hand-sewn onto muslin canvases, the fabric left unsteamed and edges left exposed and jagged; imperfect.

“I really wanted to show the edges, because the edges are so important to what was going on in my head,” she says. “[These paintings] were made during a time of chaos in my mind. So I left them wrinkly. I didn’t steam them. All of this is part of the work. These folds, these lines, these wrinkles — it’s all part of the art.” 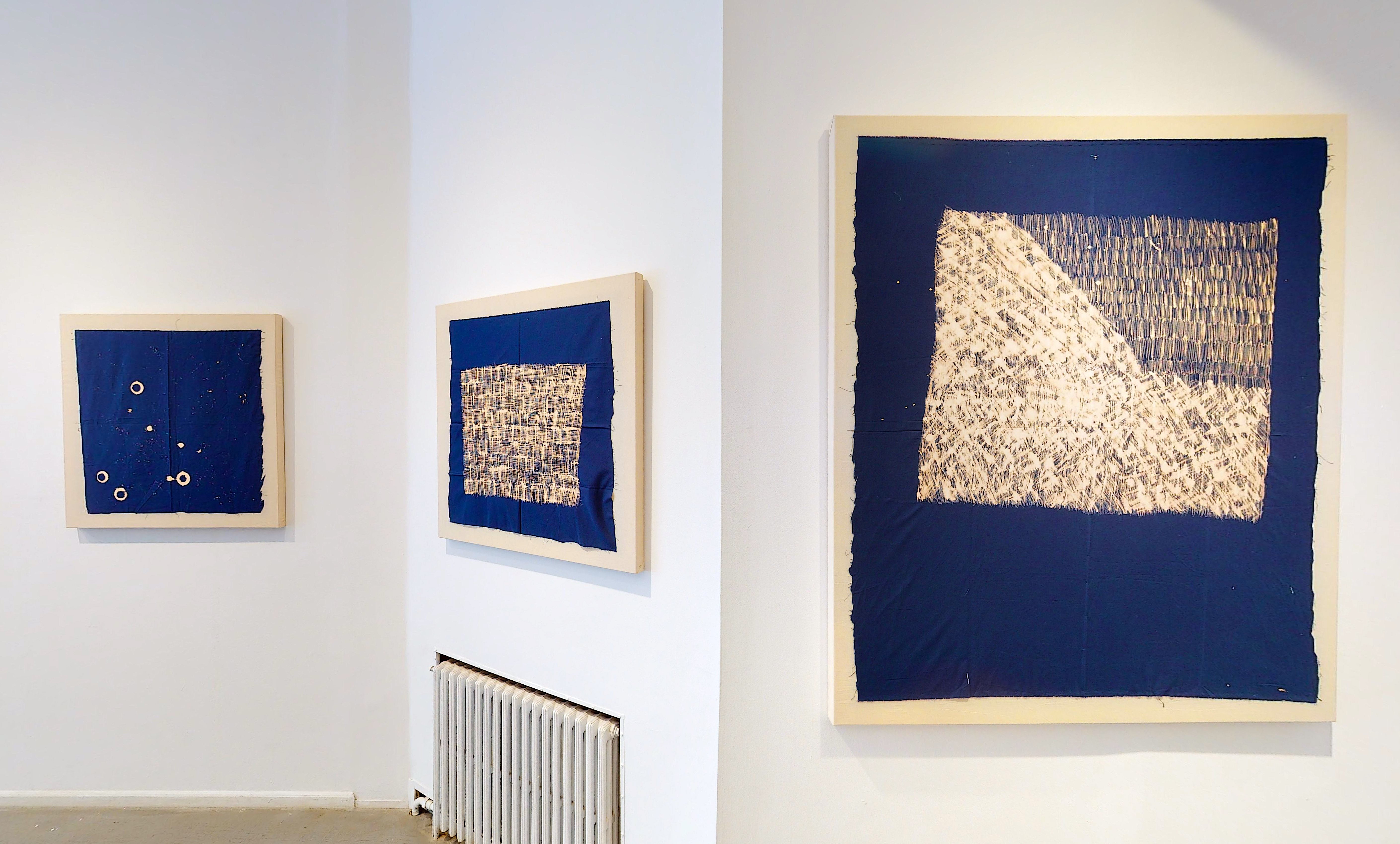 More From the Eye:

Enoc Perez’s Drawings, on View at Skarstedt Gallery in East Hampton, Make Sense of the Chaos

Peter Saul Hasn’t Run Out of New Subjects to Paint