The 21st-century convergence of love and technology has almost become an entire genre – from Black Mirror to Upload, Soulmates and The One, it feels like there’s little left to be wrung from the concept. But Made For Love, based on a 2017 novel by Alissa Nutting (who is a writer and producer on the series), finds a fresh – if, one hopes, implausible – angle.

Cristin Milioti is Hazel Green, a one-time grifter who has spent 10 years married to billionaire tech mogul Byron Gogol (Billy Magnussen), living with him inside the “Gogol hub”, a compound almost entirely created from Virtual Reality; from the outside, the hub is in a remote desert, but inside, with the click of a button, the views outside their floor-to-ceiling windows are a lush, tropical oasis. Or, if the mood takes, anywhere else in the (virtual) world. 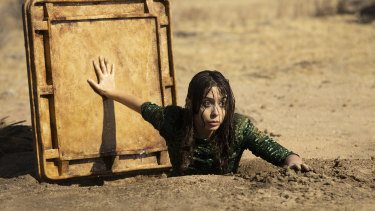 After a commercial for one of Gogol’s new products, the series opens with Hazel emerging into this desert landscape from an underground tunnel, having escaped her suffocating marriage, the bizarre details of which are revealed in flashbacks to her life inside the hub.

Byron, a sort of a sociopathic Elon Musk figure, oversees all manner of research into high-tech gadgetry, much of which he uses to control Hazel; life inside the hub is constantly monitored, she has a strict schedule, right down to designated nap times, and is even required to rate her “biometrically recorded” orgasms, pestered by a pop-up on her device’s screen until she completes a rating out of five.

In the hub’s swimming pool, a captive dolphin, Zelda, is used for Gogol research; she’s fitted with a chip that allows Byron’s staff – among them Noma Dumezweni as Fiffany and Dan Bakkedahl as Herringbone – to monitor her mood changes. It’s part of an experiment for the company’s next device, Made For Love, a chip that digitally links a couple’s neural networks, allowing them to access each other’s thoughts and feelings. 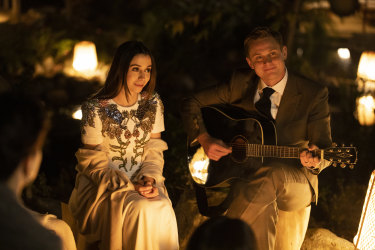 Cristin Milioti and Billy Magnussen as Hazel and ‘techbro’ Byron.Credit:Stan

Byron’s researchers have warned him that the chip is not yet ready for human use, but this doesn’t stop him from covertly implanting one into Hazel’s head without her consent. She doesn’t realise until she has escaped the hub that Byron can see everything she sees, track her movements and even her thoughts, or “emotional data”, as Byron calls it.

It’s beyond creepy, but Byron sees this new innovation not as an invasive tracking device, but as a way of bringing couples closer together, eliminating misunderstandings and “sharing one mind”.

Not having left the hub for 10 years, Hazel has nowhere to go, so she returns to the down-at-heel small town where she grew up, and to her estranged, deadbeat dad, Herb (Ray Romano), who is just as miserable as when she last saw him, having turned to drinking after the death of Hazel’s mum years earlier.

Herb is not technically alone; he has a new partner, Diane, a rubber sex doll he describes as his “synthetic partner”.

Hazel is disgusted, but resigns herself to staying with Herb – who resigns himself to helping her escape Byron, who is obsessively watching her movements from the hub.

Part thriller and part sci-fi caper, Made for Love is also something of a dark farce, with terrific performances from Milioti (who also starred with Magnussen in the Black Mirror episode USS Callister) and Romano as Herb, whose reputation around town as “Herb the perv” transpires to be something more than it first seems, playing into the series’ exploration of different types of love and identity.

Made For Love lacks some of the subtleties of of other dystopian stories – there are some easy metaphors, such as Byron and Hazel’s double wedding rings, which resemble handcuffs, and the similarities between Herb’s “partner” Diane and Hazel’s passive role of pretty and compliant wife – but a great cast and a wry, almost slapstick humour carries the story along to an unexpected and surprisingly touching conclusion.

*Stan is owned by Nine, the owner of this hasthead.