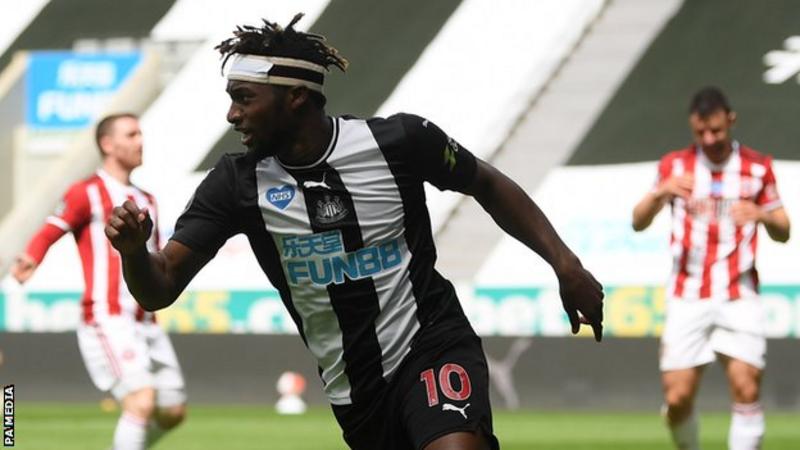 Joelinton scored only his second Premier League goal and first since 25 August as Newcastle swept aside 10-man Sheffield United to take a huge step towards safety.

The relief on the Brazilian striker’s face was apparent when he tapped in the Magpies’ third, and although there were no fans inside St James’ Park to celebrate with, no doubt many were screaming with delight as the £40m striker ended his torrid run.

That was the icing on a sweet Magpies cake. Despite playing their first match since the restart, they looked far fresher than their opponents who produced one of their worst defensive displays of the season, capped off by the red card for John Egan five minutes after the break.

It means Chris Wilder’s side, who drew against Aston Villa in their opening match back, have taken just one point from two games against teams they would be expected to beat. Next up for them is Manchester United – a crucial match in the race for a top-four spot.

As for Newcastle, who have been dealing with a takeover saga during the lockdown, they have 38 points and are 11 points above the drop-zone. They now look all but safe.

Allan Saint-Maximin sent them on their way when he fired home at the far post after Enda Stevens inexplicably allowed Ritchie’s low ball to go between his legs. Ritchie then added a second with a thunderous strike from the edge of the area.

Then came Joelinton’s strike from close range after Miguel Almiron delivered a pinpoint low ball to his feet.

Newcastle stay at home for their next match against struggling Aston Villa.

Steve Bruce has somehow remained gracious ever since he took his dream job last summer. As a former Sunderland manager who followed former fans’ darling Rafael Benitez, he was already in the red when he arrived.

His team selections, particularly the reluctance to drop Joelinton, further frustrated the supporters and now the possibility of new, moneyed owners from Saudi Arabia has cast further doubt on the future of the manager.

But time and again Bruce has confounded his critics this season with wins over Tottenham, Manchester United, Chelsea and now this double over the Blades.

His side produced a disciplined display with plenty of verve provided by Saint-Maximin, Almiron and Ritchie.

Saint-Maximin, in particular, was exceptional. The £20m outlay last summer now seems a snip for the 23-year-old who embarrassed the visiting defence with his trickery and pace, before he got his reward in the 55th minute.

Ritchie added the second 14 minutes later with the goal of the game – a fierce drive which was too hot to handle for Dean Henderson.

And with 12 minutes remaining, Joelinton, who had missed an easy chance in the first half, scored his second league goal for the club – 2,130 minutes and 39 shots after scoring the first.

Jack Robinson (Sheffield United) wins a free kick in the defensive half.

Federico Fernández (Newcastle United) wins a free kick in the defensive half.

Chris Basham (Sheffield United) wins a free kick in the defensive half.

Federico Fernández (Newcastle United) wins a free kick in the defensive half.

Attempt saved. Matt Ritchie (Newcastle United) left footed shot from outside the box is saved in the centre of the goal. Assisted by Miguel Almirón.

Attempt missed. Enda Stevens (Sheffield United) left footed shot from the centre of the box is high and wide to the left. Assisted by Billy Sharp.

Jamaal Lascelles (Newcastle United) is shown the yellow card for a bad foul.

Allan Saint-Maximin (Newcastle United) wins a free kick in the defensive half.

Oliver Norwood (Sheffield United) wins a free kick in the defensive half.

Danny Rose (Newcastle United) wins a free kick in the attacking half.

Attempt missed. Billy Sharp (Sheffield United) header from the centre of the box is close, but misses to the left. Assisted by George Baldock with a cross.

Attempt saved. Joelinton (Newcastle United) header from the centre of the box is saved in the bottom right corner. Assisted by Isaac Hayden with a cross.

Attempt missed. Jonjo Shelvey (Newcastle United) right footed shot from outside the box is too high from a direct free kick.