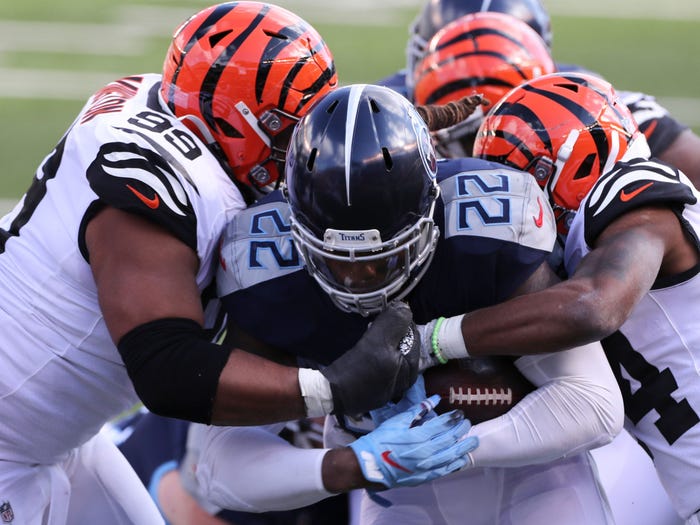 The NFL season is at its halfway point. This season has been anything but predictable so far, thanks to the coronavirus pandemic, a rash of injuries to star players, and the usual upsets and shockers that occur each week.

So far, the AFC looks like the heavyweight conference with the 7-1 Chiefs and 7-0 Steelers, but the NFC boasts several contenders, including the momentum-gaining Buccaneers.

Heading into Week 9, here's a look at where all 32 teams stand.

One thing to know: Mike McCarthy's first year at the helm for the Cowboys has been a complete and total disaster. While the loss of Dak Prescott obviously was a major blow to the team, the problems here go beyond quarterback play.

One thing to know: Gardner Minshew has a fractured hand, and rookie quarterback Jake Luton is taking over the offense. The Jaguars might be racing to that No. 1 pick.

One thing to know: Five of the Giants' seven losses have come by one score or less, so better days may be on the horizon for New York. But for now, they're 1-7 and sitting at the bottom of the worst division in football.

One thing to know: The Falcons are 2-1 since firing Dan Quinn, and their Week 8 win over the Panthers was the first time this season they held an opponent under 20 points.

One thing to know: The Texans are 1-6 and have already let go of head coach and general manager Bill O'Brien. But with the team already overpaying at so many positions, things may worsen before they get better in Houston.

One thing to know: Dalvin Cook was the Week 8 MVP with 226 yards from scrimmage and 4 touchdowns. Vikings head coach Mike Zimmer told reporters it's time to "ride" their $63 million running back.

One thing to know: The Broncos shook off an 0-3 start to the season and have now won three of their past four games, including a dramatic late win over the Chargers on Sunday.

One thing to know: The Bengals' Week 8 upset of the Titans was the first time all season that Joe Burrow wasn't sacked. The Bengals rank 30th in Football Outsider's pass protection stat.

One thing to know: Washington has moved Dwayne Haskins to third in the depth chart behind Kyle Allen and Alex Smith, but head coach Ron Rivera says he's not done with the team.

One thing to know: It hasn't translated to wins just yet, but Justin Herbert has thrown 13 touchdowns to 3 interceptions over his last four starts, with an average passer rating of 115. The Chargers appear to have their franchise quarterback.

One thing to know: The Patriots lost their fourth straight game thanks to a late fumble by quarterback Cam Newton on the team's final drive. After 20 years of dominance, New England's future looks uncertain for the first time in a long time.

One thing to know: The Eagles' Weeks 11-15 opponents currently have a combined record of 26-10. But if Philadelphia can keep beating lowly division opponents, they might sneak into the playoffs with the division title.

One thing to know: After a 3-2 start to the season, the Panthers have lost three straight games by a touchdown or less and face off against the Chiefs on Sunday in another likely loss. Carolina has a bright future, but first-year head coach Matt Rhule might need another season before his Panthers compete in the playoffs.

One thing to know: The Lions had some hope for a playoff surge after winning two on the road, but they were blown out at home by the Colts in Week 8. It's the same old Lions.

One thing to know: The Los Angeles Rams were beaten on all sides of the ball by the Miami Dolphins on Sunday. They have five wins, but four of them came against the NFC East, raising questions about how good this team really is.

One thing to know: The Dolphins have 13 defensive takeaways, tied for second-most in the NFL. They're 14th in defensive DVOA this year, up from 32nd last season.

One thing to know: With a flurry of players already injured and another group heading to the COVID-19 list ahead of their Thursday game against the Packers, it's tough to get a gauge on the 49ers' chances of making a run.

One thing to know: Lest anyone think Baker Mayfield would improve with Odell Beckham Jr. out of the lineup, he completed 12-of-25 passes for 122 yards, 0 touchdowns, and 0 interceptions in Week 8. The Browns need someone to step up on offense.

One thing to know: After a surprising 5-1 start to the season, the Bears have now lost two straight and need a reset. They'll need to stop Derrick Henry and the Titans to pull out of their tailspin.

One thing to know: The Colts have won five of their past six games but face some tough opponents in the coming weeks, including the Ravens, Packers, and two divisional games against the Titans. It's a stretch that could make or break their season.

One thing to know: The Cardinals may be ahead of schedule. They own the second-best point-differential in the NFC and are one of four teams in the top 10 in offensive and defensive DVOA.

One thing to know: With their win over the Patriots, the Buffalo Bills are clear favorites to take the AFC East division title this year. Circle the wagons.

One thing to know: The trade deadline came and went, and the Packers didn't add an extra receiver or a defender to strengthen a defense ranked 29th in DVOA. Did the Packers miss a chance to go all-in in a wide-open NFC?

One thing to know: The Titans' loss to the Bengals was one of the biggest surprises of Week 8, but the Tennessee offense is still one to be feared. Halfway through the season, running back Derrick Henry is averaging more than 100 yards and one touchdown per game.

One thing to know: The Saints must feel good about being 5-2 with a top-10 offense with Michael Thomas only playing one game. Getting their top receiver back might help Drew Brees and lessen the load on Alvin Kamara.

One thing to know: Baltimore fought hard to give themselves a fighting chance on Sunday, but a potential game-winning touchdown fell incomplete on the final play of the game. The Ravens are still a force to be reckoned with, but there is some concern about their ability to win big games.

One thing to know: With each game, DK Metcalf looks like more of a steal for the Seahawks. The second-year receiver is fourth in total receiving yards, second in yards per catch, and tied for first in receiving touchdowns.

One thing to know: After a somewhat ho-hum start in Tampa Bay, Tom Brady has locked in a bit in recent weeks, leading the Buccaneers to their sixth win in seven games with a comeback victory over the Giants on Monday night.

One thing to know: The only undefeated team left in the NFL, the Steelers have the fifth-easiest schedule remaining, according to FPI. Can they make it to 16-0?

One thing to know: The Chiefs played with their food a bit en route to a dominant 35-9 win over the Jets. Patrick Mahomes threw 416 yards and five touchdowns. The reigning champs are still the team to beat in the NFL.