As First Nations people, we have been forced through hundreds of years of dispossession and trauma to become activists and advocates for change in our communities, and we do this through truth-telling. 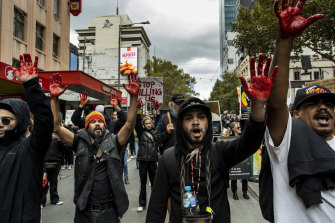 Protesters march in Melbourne on Saturday over Indigenous deaths in custody. Credit:Getty Images

I am a proud Wurundjeri and Ngurai Illum Wurrung woman. On Saturday, in my capacity as a traditional custodian of the land that Naarm (Melbourne) was built upon, I welcomed the thousands of people who had gathered in front of State Parliament in solidarity with our communities, to protest about the hundreds of our lives that have been lost at the hands of the state and federal governments while in custody.

I have always been guided by those who came before me: my ancestors, my elders and my community. This, my cultural knowledge and my skills as a recognised leader in trauma and healing practices is what guides me each day.

We as Aboriginal people conduct truth-telling so our children don’t have to carry the weight of the past into their futures. I’ve seen the transformative power of our culture. As beneficiaries of ancient wisdom, we can draw on our heritages to heal and restore justice to unjust legacies.

The sea of people who turned up on Saturday in support of these families stood and listened as story after story was told of each delicate life, who they were and how they were killed. But a few thousand people in Melbourne isn’t the whole country.

In September of 1983, John Pat was just 16 years old when drunk and off-duty police officers beat him to death in Western Australia, triggering a Royal Commission into Aboriginal Deaths in Custody. The officers involved were acquitted of manslaughter charges after pleading self-defence. No one was ever held accountable for his death.

Yesterday marked 30 years since the recommendations were handed down from that royal commission, and despite the decades that have passed, not all of those recommendations have been implemented. There have since been 474 more deaths at the hands of the state, territory and federal governments.

That’s 474 precious lives of our community members across this nation, and about 474 families – although some have experienced multiple deaths in custody – who will forever be in mourning, and we as a larger community of Aboriginal people mourn with them. Had all of those recommendations been implemented, I would probably not be writing this piece.

There has been plenty of discussion about our people dying in custody, but no one is listening. There’s no action, and there’s no justice. We have had five of these deaths since March, and this country needs to do better.

One of the first demands that we heard on Saturday, which came from those families with lived experience, was to implement a separate body that will prevent police from investigating themselves.

Every time we hear of someone dying in custody, we get no justice, and no real explanation. We are tired of hearing that the police will investigate themselves for something they have done, when we know there is a culture of mateship and cover-up within the existing system.

Victoria has already led by example in being the first state in the country to progress a Treaty, or Treaties, and the truth and justice process, with its First Peoples. The state should again lead by example and be the first to implement an independent body to investigate police and government for these crimes.

Our creator spirits have made sure that we have never, ever stopped seeking justice. For us this never goes away. For us, once a rally finishes, we still have these injustices as a burden on our shoulders as First Nations peoples.

We need to work together to create tangible change, and that change is going to come through truth-telling, listening and sharing. Retelling our history as Victoria is retelling the truth. Although it’s hard and a tough thing for many non-Indigenous people to digest, it’s the start of what needs to be done for things to change.

We as a state, and more widely as a nation, need to be able to sit through these stories from Aboriginal communities every single day, not just when we are rallying for change. This country and this state needs to ensure there is a safe space for our communities to be able to tell those stories, and to hold space for them to do so.

Aboriginal people should be able to walk away from sharing their truth feeling empowered as they contribute to the path towards restorative justice. Those who listen to us should share with us the deep feeling of injustice and be inspired to fight with us, and for us. With a shared understanding of our history, we can move towards a better future, together.

Sue-Anne Hunter is a proud Wurundjeri and Ngurai Illum Wurrung woman. She is a shortlisted candidate for Yoo-rrook Justice Commissioner.