A full plane of 165 Australians was due to depart from Delhi in the early hours of Sunday, with no passengers blocked from boarding the flight because of a positive COVID-19 test.

The fact that no passengers were excluded from the flight stands in stark contrast to a week ago, when just 80 of the planned-for 150 seats were filled on the first flight that arrived in Darwin. It does not preclude the possibility that a passenger may test positive on arrival to quarantine in Australia. 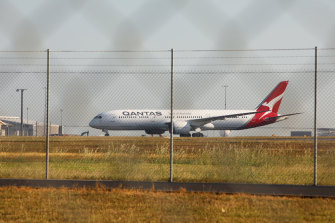 The first repatriation flight for Australians who had been stranded in India arrived last week.Credit:Getty

And the number of government facilitated-flights back to Australia by June 4 will also increase by two, from six to eight, after South Australia and Western Australia each agreed to take a repatriation flight.

Those two states have joined Victoria, New South Wales and Queensland – who will accept one flight each – and the NT, which is taking three flights, in agreeing to receive a flight.

A spokesman for the Department of Foreign Affairs and Trade said the flight would arrive in Darwin on Sunday and that “this support from the states will significantly increase the number of facilitated commercial flights”.

“We encourage Australians seeking to return to Australia to register their details with DFAT,” the spokesman said.

A total of 42 passengers who had been due to take last week’s first flight tested positive for coronavirus while in a three-day mandatory pre-flight hotel stay in Delhi and were unable to fly, while 31 of their close contacts were also barred from the mercy flight.

A number of passengers due to take that first flight questioned the accuracy of their positive result and said they had received a negative results from other labs, while the ABC last week reported the lab which did the tests for Qantas had been suspended by India’s national accreditation agency last month.

However, both the Department of Foreign Affairs and Qantas do not believe that any passengers were denied the right to board the first flight last week in error.

As this masthead reported last week, DFAT is prioritising passengers who were unable to board due to a positive test result for future flights from India, following a period of isolation.

“All passengers who were unable to board the facilitated flight on the 14th May have been contacted by DFAT to arrange their return flight.”

The chartered flights were announced after the federal government announced a temporary travel ban on people arriving from India on April, a move which provoked a backlash from some sections of the community and was criticised by some legal experts.

About 11,200 Australians have registered with the department as wanting to return home from India, and 1000 of these people are listed as vulnerable.

The latest flight from Delhi to Darwin is the 40th government-facilitated flight from India to Australia since the pandemic began.