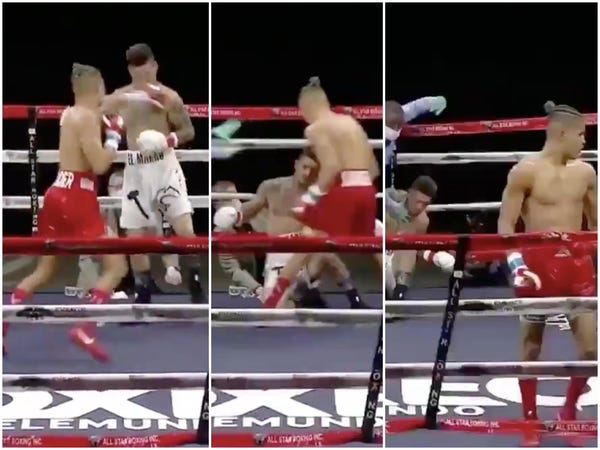 One of boxing's hottest young prospects smacked a fully grown man into the ropes, winning by first round knockout at an event Friday, one day before he turned 18.

Meet Xander Zayas, a teenage welterweight who appears destined for the top of the sport because of the promotional power behind him at Top Rank, because of his reputable manager Peter Kahn, and, of course, his TV-friendly ability to win by brutal stoppage.

The Puerto Rican prizefighter fought for the fifth time in his pro career at a behind-closed-doors show in Kissimmee, Florida, extending his unbeaten run by overpowering his overmatched opponent Orlando Salgado, who is 25.

In the fight clip below, you can see Zayas throw a three-punch combination at Salgado's jaw, followed by jabs, and then flurries of shots until Salgado is defenseless with his back against the ropes.

From there, Zayas displayed his finishing ability as a left hook appeared to knock Salgado out on his feet, where the youngster was able to use his opponent's head as target practise, falling the older man with brutal left hands.

Zayas has long excited prominent people at Top Rank, one of boxing's most powerful companies.

Its 88-year-old founder Bob Arum first met Zayas when he was 16 years old, Insider understands, and it was not long before Arum realized the star potential that had walked through his Las Vegas office.

"I looked at the kid … they showed me clips of amateur fights," Arum told Insider in 2019. "And I realized I had a kid in front of me who was a welterweight who would probably end up at light heavyweight or heavyweight.

"He has a lot of talent, a lovely kid who you sort of fall in love with."