Online searches for ‘bread’, ‘at home workout’, ‘animal crossing’ and ‘buzz cut’ soar as people try to occupy themselves during the global coronavirus lockdown

Online searches are shifting enormously during the coronavirus lockdown as people scour the web for ways to keep themselves informed and entertained.

Worldwide data from search giant Google, for example, reveals an all-time peak in queries pertaining to ‘buzz cut’ as people are forced to be their own barber.

Ireland and Canada are neck and neck for the most searches of the aggressively short hair style, closely followed by the US and Australia.

Popular game Animal Crossing has also soared in popularity, with almost a 1,000 per cent spike in US Google searches in the last 30 days.

The game, an in vogue fad among millenials and Gen Zers has become part of the social media discourse and is number two on Amazon’s list of ‘movers and shakers’.

According to Reboot Online Marketing Agency, searches for bread-related topics have also gone through the roof, with baking recipes, banana bread and flour rising in popularity by 733 per cent, 450 per cent and 335 per cent, respectively. 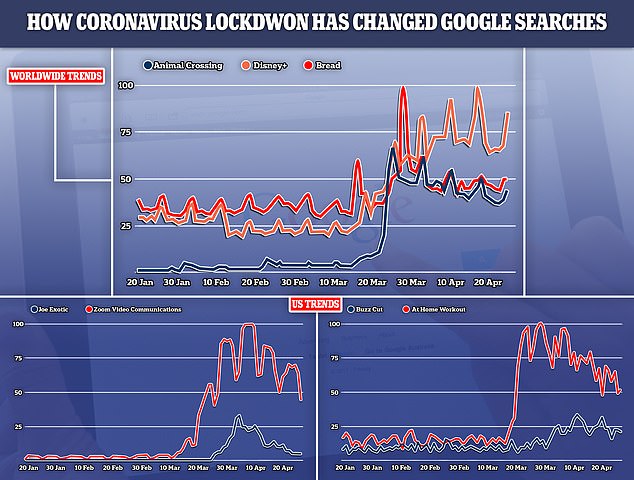 Pictured, global search popularity for various term in both the US and worldwide. It shows how, in the last 90 days, search terms have changed dramatically as people adapt to a life in coronavirus lockdown 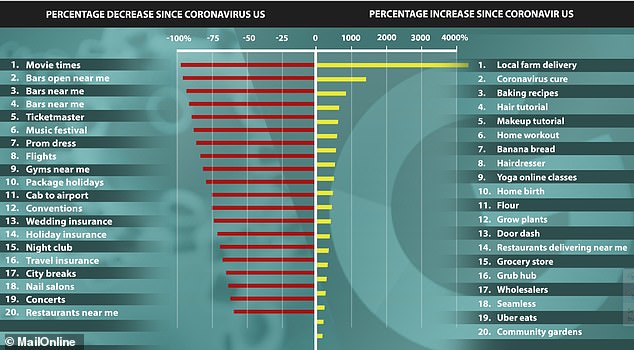 According to Reboot Online Marketing Agency (pictured), searches for bread-related topics have also gone through the roof, with baking recipes, banana bread and flour rising in popularity by 733 per cent, 450 per cent and 335 per cent, respectively

Data from The Hustle reveals that since Donald Trump declared a state of national emergency on March 13, the popularity of baking has escalated dramatically.

According to the analytics tool Jungle Scout, there have been more than 320,000 searches for ‘all-purpose flour’ on Amazon. This represents an increase of more than 3,500 per cent.

Their analysis turned up an incredible 4,300 per cent rise in US searches for Local Farm delivery, while hair tutorial (700 per cent), makeup tutorial (488 per cent) and home workout (478 per cent) also surged in the last month.

Other topics ceasing the imagination of people around the world, particularly in the US, centre around streaming services.

For example, Joe Exotic (real name Joseph Maldonado-Passage), the convicted felon found guilty of trying to have rival Carole Baskin murdered and unwitting star of the Netflix show Tiger King, saw his online popularity surge around the start of April.

This coincides with the release of the wildly popular docu-series.

Disney+ also saw its search frequency increase around the start of March as millions around the world were restricted to their homes amid coronavirus social movement restrictions.

Disney+ has been live in the US for some months but only went live in the UK and other parts of the world in the last few weeks.

Disney+ has as of yet not announced how many users signed up in the first few weeks of operation since this March 24 expansion.

Other terms with enormous surges in frequency include popular videoconferencing app Zoom, which has been beleaguered with various security concerns.

Restaurants delivering near me

BIGGEST SEARCH DECREASES IN THE US IN THE LAST 30 DAYS

Bars open near me

Amazon’s list of Movers and Shakers shows an increase in people trying to keep themselves — and children — preoccupied during the extended hours inside.

For example, two of the top three rapidly rising books on the website of the online retailer are a Disney colouring book and ‘Five Minute Mum: Give Me Five: Five minute, easy, fun games for busy people to do with little kids’ by Daisy Upton.

The common thread tying all these together is a need for people to stay entertained during quarantine, self-isolation or lockdown.

Over the last 24 hours, more than 20million searches for ‘the last dance’ were made, citing the documentary aired on ESPN covering Michael Jordan and his historic reign at the top of the sporting world during his tenure with the Chicago Bulls.

However, while entertainment and hobby-based searches are becoming far more common, so too are searches for information on the pandemic.

Unsurprisingly, terms ‘coronavirus’, ‘symptoms’ and ‘pandemic’ have all become far more popular, whereas the search seeing the biggest rise in popularity at the moment in the US is stimulus, regarding the $1,000 check being sent to Americans.

Reboot Online Marketing Agency also looked at how search terms have changed in the UK.

It also found an increase in Google searches for ‘home workouts’, ‘fish and chips deliveries’ and ‘baking recipes. 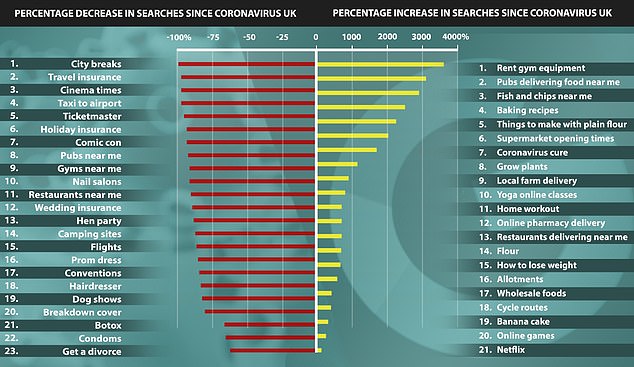 The use of search terms like ‘get a divorce’, ‘condoms’, ‘botox’ and ‘prom dress’ have all fallen radically since people began staying at home. The findings highlight how lockdown and social distancing measures are having a marked effect on the way we live our lives in the time of COVID-19 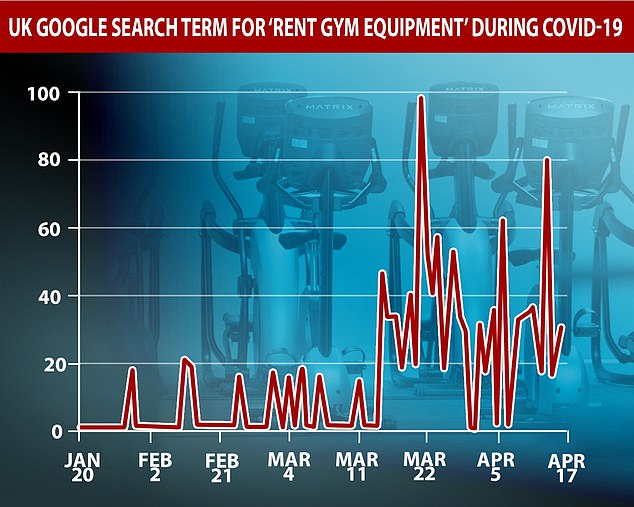 According to Reboot, in the UK there has been a staggering 3600 per cent increase in people looking online to ‘rent gym equipment’ since the lockdown began. Pictured, the same search term has seen a boost worldwide over the last 90 days. (Note that these figures are relative — 100 represents peak interest in the term over the three-month period, 50 half that, etc.)

However, the use of search terms like ‘get a divorce’, ‘condoms’, ‘botox’ and ‘prom dress’ have all fallen radically since people began staying at home.

They report that, showing the largest lockdown boost, there has been a staggering 3600 per cent increase in people looking online to ‘rent gym equipment’ as people look to be able to recreate their normal workout routines at home.

Perhaps to replace all those burnt calories, however, the next four search terms that have seen the largest hike in recent weeks are all noticeably food-centric.

Other terms that have grown in popularity since the lockdown began include ‘grow plants’, ‘yoga online classes’, online games and — very specifically — ‘banana cake’.

Unsurprisingly, there has also been a 1,700 per cent rise in people looking up information on a ‘coronavirus cure’. 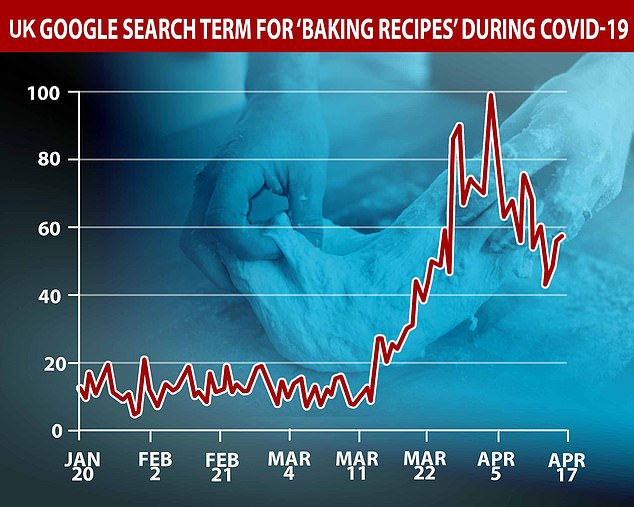 In the UK, the search term ‘baking recipes’ is up 2,900 per cent sine the lockdown began, according to Reboot. Pictured, the same search term has seen a boost worldwide since mid-February. (Note that these figures are relative — 100 represents peak interest in the term over the three-month period, 50 half that, etc.) 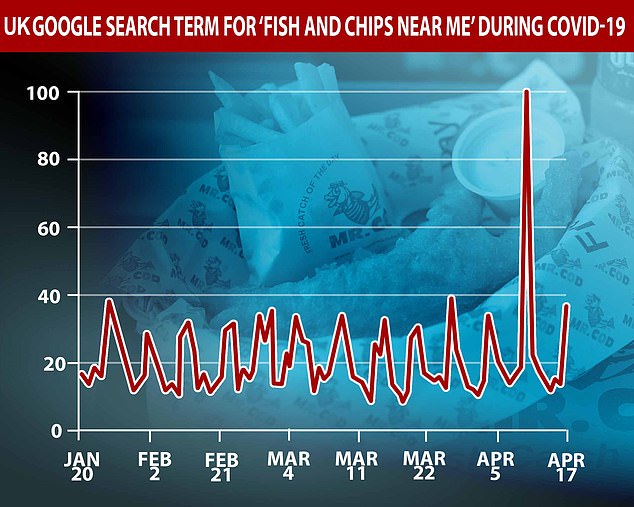 In the UK, the search term ‘fish and chips near me’ is up 2,500 per cent sine the lockdown began, according to Reboot. Pictured, across the globe, however, the same search term has been relatively consistent over the last 90 days, increasing in popularity on Sundays — except for a spike on April 10, Good Friday. (Note that these figures are relative — 100 represents peak interest in the term over the three-month period, 50 half that, etc.)

What do police say is ‘reasonable behaviour’ during the lockdown? 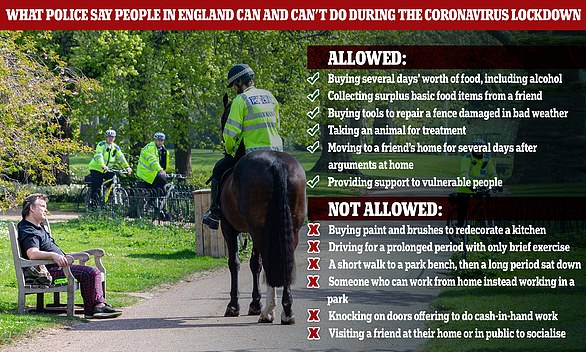