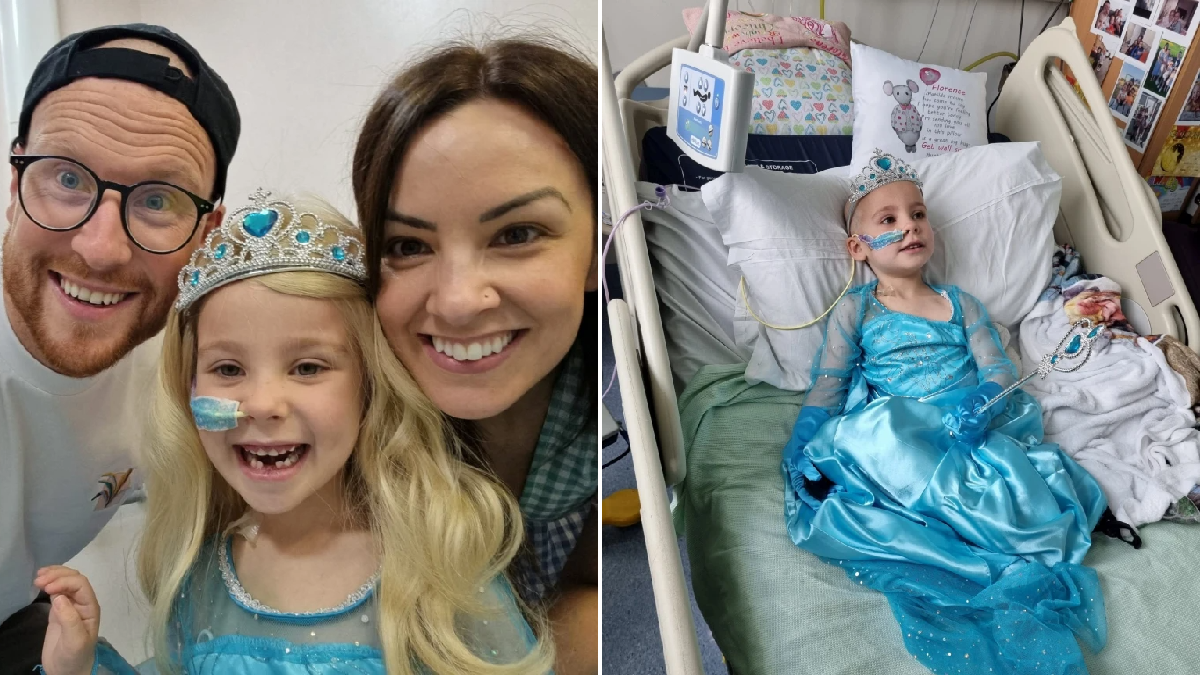 The youngster is battling a rare form of cancer, called acute myeloid leukaemia, and her parents Andrew and Stacey are trying to raise half a million pounds for her life-saving treatment – which isn’t available on the NHS.

When Florence was first taken to hospital with unusual symptoms, doctors originally though it was a chest or ear infection and then tonsillitis.

But on Friday 13 May, the family received a cancer diagnosis and Florence started receiving chemo on the Saturday.

Her dad Andrew said: ‘At the beginning of May, she had high temperatures and she was lethargic. On most evenings she was spiking temperature-wise.

‘They first diagnosed her with a chest infection. Then tonsillitis, then an ear infection.

‘We were at the doctors five times in ten days. She had mouth ulcers which were a common AML symptom. We kept going back and they kept saying the same things.

‘Luckily my wife kept going back. Her motherly intuition kicked in. We went to A&E on Friday 13 of all days.

‘They eventually did her bloods. Her white blood cell count was that low they diagnosed her with leukemia on the spot.

‘Her gums were starting to really protrude. Her mouth were covered in ulcers. We now know that this is a common symptom.

‘My wife then called me at work in tears and said she had blood cancer. I blinked and then I was on the floor.’

But Florence also requires a bone marrow transplant as well as other potential life-saving treatment.

As a result, Andrew and Stacey are hoping to raise the £500,000 needed for the specialist Car-T cell therapy in Singapore or the USA, which is not available in the UK.

Andrew adds: ‘She’s in the high-risk category. We’re going to organise the Car-T therapy before we know the results of the bone transplant.

‘It’s a highly likely that it’s a needed back-up option. The bone marrow transplant is the safest option but the CAR-T therapy is a likelihood.’

So far, their local community in Corby, Northants, has raised more than £330,000 in just over a month.

And this week thousands of people went to school and work dressed in rainbow colours to raise money to mark Florence’s sixth birthday.

Andrew and Stacey say they’ve been blown away by the support for their ‘happy go lucky’ girl – who is alway keen to cheer other children up on her ward.

‘Her empathy levels for a child are through the roof. She has big bright smiles. She’s always thinking about everyone else,’ adds Andrew.