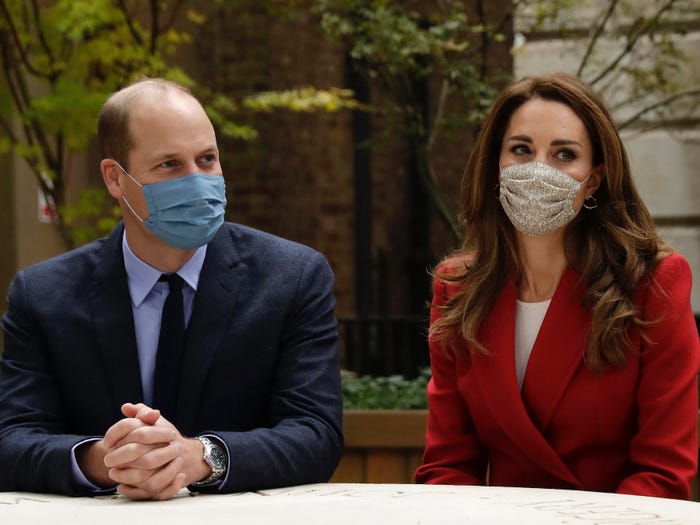 Reports of Prince William's COVID-19 diagnosis could have been timed to coincide with England's second lockdown, according to Grant Harrold, former butler to the Prince of Wales.

The Sun's Clemmie Moodie and Matt Wilkinson reported on Monday that William tested positive for the disease caused by the novel coronavirus in April, shortly after Prince Charles and the British Prime Minister Boris Johnson tested positive.

Kensington Palace has declined to provide comment on the record when contacted by Insider about The Sun's report.

The duke didn't announce it at the time because he didn't want to cause alarm, according to The Sun.

"There were important things going on and I didn't want to worry anyone," William told one person during a royal engagement, the publication reported.

Harrold told Insider that William's reportedly positive test result may have been made public now to boost the nation's morale in the face of a second lockdown.

England is in lockdown until December 2. William's reported diagnosis could help the public understand the gravity of the situation.

Boris Johnson announced on Saturday that England would go into lockdown on November 5 until December 2.

Nonessential stores, restaurants, and pubs are now closed across the country for at least a month, while households are banned from mixing.

Members of the government believe the lockdown could extend into next year, Insider's senior politics reporter Adam Payne previously reported.

Harrold, who runs his own etiquette school, said reports of William's diagnosis could encourage those who are struggling to cope with the second lockdown.

"We all respect that it's private. But then why come out six months later and say it?" Harrold told Insider. "It came across a bit like a PR stunt — but not a bad PR stunt. It's almost like we've been given this bad news, we've been put back into lockdown, and this is almost like a reveal."

"I don't think this would have come out if we weren't having another lockdown. It's to give people inspiration, to say the father has had it, the son has had it — and you can get through it too," he added. "The PR machine at the palace is genius."

Scottish television presenter Storm Huntley made similar comments during an appearance on the UK's Channel 5 talk show Jeremy Vine this week, saying: "I feel terrible to say this, but newspapers and people are trying to portray Will and Kate as being the good guys of the royal family at the moment."

"And lord knows the royal family needs some good PR at the moment, and they are doing a great job of it," she added.

William may have wanted to show 'the gravity of the situation' without coming across as trying to insert himself into politics, according to a royal expert

Henri Estramant, a royal expert and PR advisor, believes the news may have been shared in this way so William could raise awareness of the effects of COVID-19 without coming across as "preaching" to the public.

"I don't see it as a PR stunt, but now there's a second lockdown they may want to show the gravity of the situation," Estramant, cofounder of the exclusive society Royal Bridges, told Insider.

"William is quite healthy so this shows how serious it is. If a young man, a former pilot who is healthy and active had problems breathing then it shows other people can suffer too," he added, referencing The Sun report which quoted a source saying the prince was struggling to breathe after he tested positive.

Estramant added that William might have decided not to make a formal announcement about his diagnosis to avoid sounding like he was "preaching or trying to back up the government because of the situation."

As members of a constitutional monarchy, British royals cannot be seen as trying to influence or show opinion about government decisions, including the country's official restrictions and widely criticized response to the coronavirus pandemic. At the time of writing, England has had 934,099 cumulative coronavirus cases, including 891,963 active cases, and 42,136 deaths.

Some members of the British press have accused William's representatives at Kensington Palace of lying about the duke's diagnosis in April.

Robert Jobson, a royal editor at the Evening Standard, previously told Insider that the Standard and several other newspapers approached the palace for confirmation about William's diagnosis at the time, only to be "firmly guided that it wasn't true."

"After news of Boris [Johnson] and Charles' illnesses broke — and Boris had been rushed to hospital — William was concerned that informing the country about his own plight would send everyone into panic mode," The Sun wrote in its report.

Harrold told Insider he believes that William kept his reported diagnosis private to prevent public speculation over who would be next in line to the throne in the event that he and Charles died.

If William's son Prince George — who is 7 years old — were to succeed the throne before turning 18, Prince Harry could temporarily take his place as a Regent under the Regency Act 1937, according to Royal Central. A Regent is someone in the line of succession who would undertake duties on behalf of the monarch if they are under 18 and therefore too young to legally be crowned.

Related posts:
TV and Movies
‘Daredevil’ Fans Urge MCU Revival Now That Rights Have Reverted To Marvel Studios
What's New on DVD in November: 'Schitt's Creek,' 'Weathering With You,' 'Essential Fellini,' and More
'The Undoing' Actor on Season Finale: 'No One's Going to Expect What Happens'
How many episodes are there in The Undoing?
'LPBW': Some Fans Are Upset Amy Roloff Included Jacob Roloff in an Advertisement for Her Merchandise
Recent Posts
This website uses cookies to improve your user experience and to provide you with advertisements that are relevant to your interests. By continuing to browse the site you are agreeing to our use of cookies.Ok