Prime Minister Scott Morrison has been accused of misleading voters by saying the government could not issue visas to send a family of asylum seekers back to their former home in the Queensland town of Biloela, with critics noting that laws allow the intervention at any time.

Morrison made the claim while campaigning in the western Sydney electorate of Werriwa on Thursday afternoon with Immigration Minister Alex Hawke, who is waiting for a court decision that will decide the next steps in a years-long dispute over the fate of the Murugappan family. 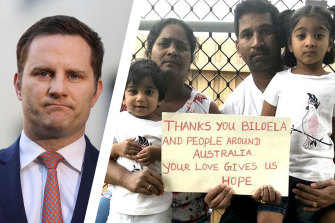 “That matter is still not determined in the courts,” Morrison told reporters when asked about the family by The Sydney Morning Herald and The Age.

“There has been no finding of protection for the family, that is what our law requires for protection to be provided with such a visa.

Priya and Nadesalingam Murugappan, who arrived in Australia by boat, and their Australian-born daughters, Kopika and Tharnicaa, were detained on Christmas Island in August 2019 after earlier detention on the mainland while they sought refugee status in the courts. They were later moved to Perth after Tharnicaa, 3, suffered a blood infection.

Deputy Prime Minister Barnaby Joyce has called in the past for the family to be returned to Biloela and said on April 24 his position had not changed.

Abul Rizvi, a former deputy secretary in the Department of Immigration, said federal law allowed the immigration minister to use his or her discretion to issue a visa.

“There will always be exceptional cases where you will want to allow visas to be issued and to do that we created ministerial discretion.

“Morrison himself would have exercised this ministerial discretion when he was [immigration] minister – I don’t know how he’s forgotten.”

“The minister for immigration can, with a stroke of a pen, grant visas that allow the Murugappan family to go back to Biloela and stay in Australia,” she said.

Bronwyn Dendle and Angela Fredericks, who live in Biloela and are friends of the Murugappans, have criticised ministers and MPs for denying the ability to intervene when Hawke could use his discretion as minister.

“It’s not sitting before the courts. It’s sitting on Minister Hawke’s desk right now. It’s been sitting there forever,” Dendle told The Herald and The Age last month.

“He only has to sign the papers and they can come home. It’s not tricky, it’s not tricky at all, but that’s the spin they give their ministers.”

Biloela is in the Queensland electorate of Flynn where the Labor candidate, Matt Burnett, supports the family being released while the Nationals candidate, Colin Boyce, says the rules should be followed.

Cut through the noise of the federal election campaign with news, views and expert analysis from Jacqueline Maley. Sign up to our Australia Votes 2022 newsletter here.