NSW Transport Minister Andrew Constance says a second wave of mega transport projects, and the sale of assets to reinvest in new infrastructure, will be part of a "silver bullet" to revive the economy.

With the coronavirus pandemic denting the state's finances, experts have warned the government will be forced to re-prioritise projects. It has already delayed a proposed third cruise ship terminal in Sydney by up to 18 months.

But Mr Constance said the pipeline of infrastructure projects would be one of the "major levers that the state has to drive its economic growth post-pandemic". 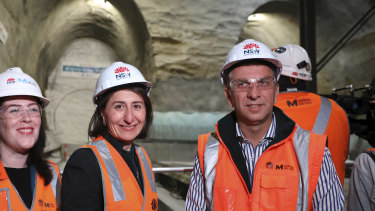 "The post-pandemic reset on infrastructure is very important but that doesn’t mean we slow the program down. If anything, we do the exact opposite – we go harder, we go faster," he told the Herald.

Mr Constance said there was "no doubt" the investment in infrastructure, and sale of public assets to reinvest in new projects – dubbed "asset recycling" – would form part of the "silver bullet that gets the state back on its feet".

"Having been Treasurer in 2014 and 2015, when we prosecuted the poles and wires transaction, that was the game changer that lifted the state," he said.

"The best way to drive [growth] is repeating the exercise we’ve just been through with a massive multi-billion dollar infrastructure program."

The government is pressing ahead with a scoping study to decide whether to sell or retain its 49 per cent stake in the 33-kilometre WestConnex motorway.

Martin Locke, an adjunct professor at the Institute of Transport and Logistics Studies at the University of Sydney, said government finances were under extreme pressure, raising questions about whether it would have to speed up the sale of stakes in WestConnex or electricity assets to pay for projects.

"People will ask, 'where is the money coming from to invest in infrastructure'? If receipts and cash flow from sources like stamp duty and payroll taxes fall, the government will have to look at … the sale of residual stakes in projects like WestConnex," he said.

Mr Locke said requests by the state for extra money from the federal government were likely to receive a lukewarm response given the Commonwealth's $130 billion wage subsidy program, as well as existing commitments to transport projects such as a rail line to a new airport in Sydney’s west.

But Mr Constance said finance was already in place for many of its projects, adding that "the Treasurer will look at all options" such as asset recycling and debt management.

Regional road upgrades and other smaller projects were also where the government could get "bang for your jobs buck", he said.

Under a timeline released before coronavirus hit, construction was due to start within the next two years on the Sydney Gateway motorway; the first stage of the M6 (previously known as the F6 Extension); the Western Harbour Tunnel and Warringah Freeway upgrade; the Sydney Metro West rail line, and the Greater West metro rail to the airport being built at Badgerys Creek.

On a conservative measure, the combined capital cost of these projects runs to more than $40 billion.

The challenge for the government in selling WestConnex is that Transurban, which owns the majority in the motorway, is considered the logical buyer, raising questions about whether the state can get fair value.

Andrew Chambers, a funds manager at investment firm Martin Currie, said the fact Transurban was the "clear frontrunner" would work against the government creating a wide field of bidders.

"They are going to be in a very strong position," he said of Transurban.

"There is no doubt asset prices are coming off. We are also seeing the large unlisted pension funds start to devalue their assets."

However, Mr Chambers said governments would need to sell public assets to raise money to kick start the economy, which he argued would be a "sensible approach even if you don't get top dollar".