Treasurer Josh Frydenberg said he was "uncomfortable" with Twitter’s decision to take down the US President’s account and Acting Prime Minister Michael McCormack blasted the move as censorship of political speech when the company had not suspended other views on its site. 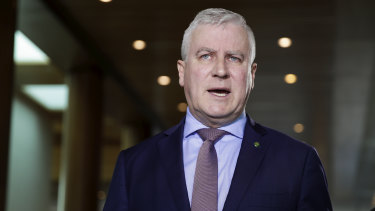 While both leaders condemned the violence in Washington DC, Mr McCormack triggered an attack from Labor after he likened the events last Thursday to the Black Lives Matter protests of recent months.

The comments signal the government’s concern about the power of the social media companies to silence political speech, as federal Parliament prepares to debate draft laws to take down “abhorrent violent” online material.

The public draft of the Online Safety Bill, released on December 23 for community comment, includes tougher sanctions against online abuse but also extends federal powers over content that incites violence.

While social media companies are under no government obligation to explain how they decide to cancel free expression, Australian Competition and Consumer Commission chairman Rod Sims said political leaders faced a “defining question” over the control of online content.

Mr McCormack, who is leading the government while Prime Minister Scott Morrison takes leave this week, said Twitter had gone too far in removing Mr Trump from its platform.

“I don’t believe in that sort of censorship. But, you know, I mean, there’s been a lot of people who’ve said and done a lot of things on Twitter previously that haven’t received that sort of condemnation or, indeed, censorship.

Twitter has suspended Mr Trump’s account, which means he cannot post new tweets and his old tweets are no longer on the platform, while Facebook has kept his old material online while blocking him from making new posts. 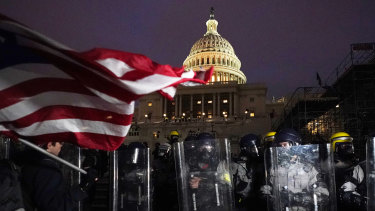 Police outside the Capitol after the riot.Credit:AP

Amnesty International criticised Mr McCormack for drawing a parallel between the Black Lives Matter protests and the violence at the Capitol last Thursday, which Mr Biden described as an insurrection.

Speaking on ABC Radio National on Monday morning, Mr McCormack said: “It is unfortunate that we have seen the events at the Capitol Hill that we’ve seen in recent days, similar to those race riots that we saw around the country last year.”

Mr Chalmers said it was "very disappointing" to hear Mr McCormack try to draw a similarity between the Black Lives Matter protests and the insurrection in Washington DC.