Better fertility treatment could be developed after a new sex hormone is found in zebrafish, scientists say

Scientists have found a new sex hormone in the zebra fish, which they say could lead to the development of better fertility treatment for humans.

With a single injection, Canadian researchers partially restore sexual function to genetically mutated zebrafish, enhancing the ability of the female to ovulate and lay her eggs.

Key to the process is a small-protein-like molecule produced in fish that is remarkably similar to that found in other animals, including humans.

The research team has drawn a seemingly unlikely line between the popular aquarium attraction and upcoming infertility treatments in humans.

This is due to around 70 per cent of human genes are found in zebrafish, according to scientists, which makes them well suited as lab models. 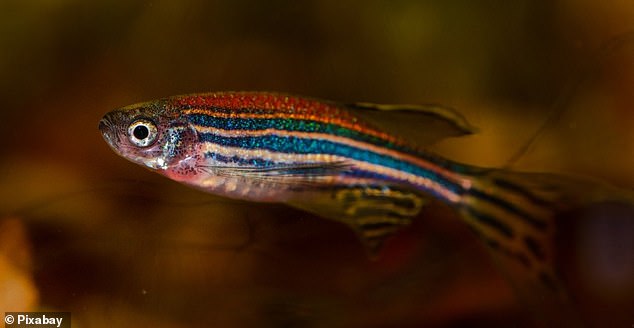 ‘We mutated two related genes and studied the effects on sexual function in zebrafish’ said senior author Vance Trudeau, professor of neuroendocrinology – the study of the interaction between the brain and hormones – at the University of Ottawa, Canada.

‘They are freshwater fish belonging to the carp and minnow family that are now a widely used model organism in biomedical research.

‘We can now use our genetically modified fish to look for other factors that could enhance sexual function, be it for increased spawning in cultured fish species, or to help with the search for new human infertility treatments.’

Professor Trudeau and his co-author Kim Mitchell had uncovered new functions that regulate how males and females interact while mating, when they originally started studying the effects of gene mutations in zebrafish.

The team had been using gene technology developed at the Chinese Academy of Sciences, in Wuhan, China, to mutate two related genes under the name secretogranin-2, which encodes the protein of the same name. 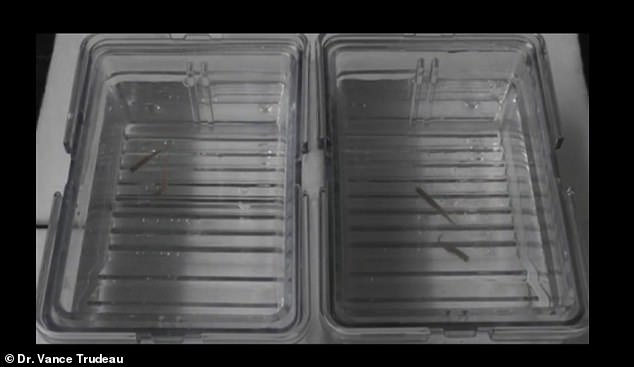 Researchers found only one in 10 of the couples with mutated genes could spawn – before the injection of the secretoneurin peptide, which is important for stimulating sexual function

The first step of the experiments was to perform the gene editing to reduce the zebrafish’s sexual behaviour – which had a profound effect, according to Professor Trudeau.

‘We changed the secretogranin-2 genes through specific mutation and found that it affected the ability of females and males to breed – it severely reduced their sexual behaviour,’ he said.

‘The fish look normal, but when both sexes are put together, they almost ignore each other!

Normally, within a few minutes after a male and female are introduced for the first time, the male chases the female in ‘a courtship ritual’.

Shortly after this, the female releases her eggs to the water, and the male instantly fertilises them.

But in a sample of gene edited zebrafish couples, the researchers found only one in 10 were able to spawn.

‘The couples carrying the introduced mutations produce eggs and sperm, but they are simply terrible at mating with each other,’ Professor Trudeau said.

‘This is the first evidence that mutation of these genes leads to disruption of sexual behaviour in any animal.’

In the second stage of the experiments, the researchers attempted to reverse this apparent inability to mate – using one fragment of secretogranin-2. 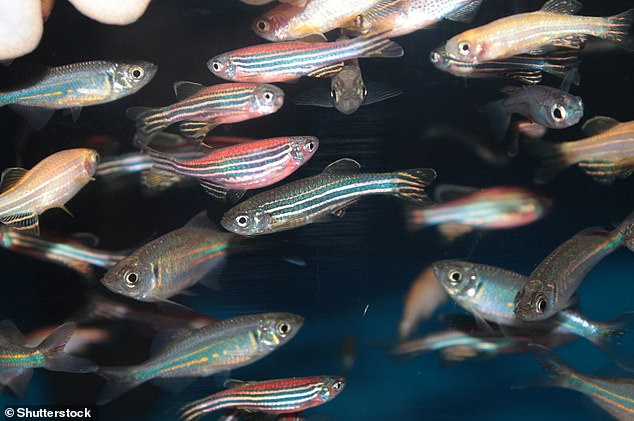 But around 70 per cent of human genes are found in zebrafish, according to scientists, which makes them well suited as lab models

Secretogranin-2, a large protein, is important for the normal functioning of brain cells and other cells that secrete hormones to control body functions such as growth and reproduction.

‘However, this protein can get chopped up by special enzymes and we found that one small fragment called the secretoneurin peptide is important for stimulating sexual function,’ said Professor Trudeau.

In the genetically altered fish, the team were able to partially restore sexual function by a single injection of the secretoneurin peptide into the body.

This is because the peptide acts on cells in the brain and pituitary gland to increase hormone release – thereby enhancing the ability of the female to ovulate and lay her eggs.

The researchers have uncovered new genes that can regulate reproduction, while the secretoneurin peptide itself has been classed as a new hormone with possible implications for future fertility research.

‘The large secretogranin-2 genes may produce many other hormone-like peptides with unknown functions,’ Professor Trudeau said.

‘This is just the beginning of the possibilities – it will be exciting to explore this in future research projects.’

The research has been published in Proceedings of the National Academy of Sciences.

ZEBRAFISH ARE BECOMING A FIXTURE OF LAB EXPERIMNETS

Zebrafish are tropical fresh-water fish in the minnow family.

In the wild, they are found in rivers and ponds of India, however they are now often available in pet shops.

The name ‘zebrafish’ comes from the horizontal blue stripes on each side of their bodies.

According to Penn State University, 70% of human genes are found in zebrafish.

While mice are evolutionarily more similar to humans because they are mammals, zebrafish have several advantages.

Adult zebrafish breed readily – approximately every 10 days – and can produce as many as 50 to 300 eggs at a time, which helps when repeating experiments.

Zebrafish embryos are also laid and fertilized externally, which allows them to be easily manipulated.

Sebrafish embryos are clear, which allows scientists to watch the fertilized eggs grow into fully formed baby fish under a microscope.