Unions are at odds over an ad depicting the Prime Minister as a bus driver speeding towards workers, with some officials saying they see the 30-second commercial attacking the government’s proposed industrial relations overhaul as counterproductive.

Several senior officials, who spoke on condition of anonymity, said the “Stop the Bus” ad, commissioned by the Electrical Trades Union and construction arm of the CFMMEU, was more about appealing to those unions’ members than the public. 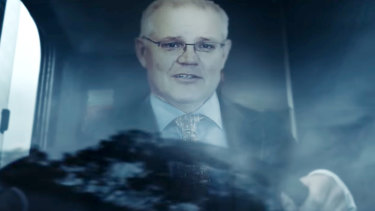 A depiction of Scott Morrison as a bus driver from the ETU and CFMMEU’s ad against the government’s industrial relations overhaul.

They fear the ad could alienate crossbench MPs voting on the government’s IR bill, both because it has been criticised by road safety advocates for trivialising the issue and because it highlights the “hard man” image of parts of the union movement.

“If this ad is designed to defeat the legislation, which is dependent on the crossbench, it’s a shocking miscalculation,” one senior figure from another union said.

Relations between the construction division of the CFMMEU, which is close to the ETU, and some other parts of the union movement have been tense since the CFMMEU’s Victorian construction boss, John Setka, rejected calls to resign in 2019 after he was charged with harassing his wife.

The government says its proposed IR changes aim to make it easier for employers to hire new workers in the wake of the coronavirus pandemic while Labor and the unions have criticised it as an attack on worker pay and conditions.

Independent senator Rex Patrick has said he will not be swayed by the CFMMEU/ETU campaign, which asked union members to write to crossbenchers.

The Australian Council of Trade Unions has its own ad, which bills workers as heroes of the pandemic and says wage cuts are the last thing the economy needs as it recovers from the pandemic.

The government has moved to link the two campaigns, with Industrial Relations Minister Christian Porter saying late last month the ACTU had adopted the “same form as the militant CFMMEU and ETU by … opposing what is a commonsense package of reforms”.

The ETU and CFMMEU declined to comment. ETU national secretary Allen Hicks has previously rejected government criticism of its ad as “sanctimonious drivel” designed to distract from the union’s concerns about the IR changes.

Despite the differing campaign tactics, unions agree the bill will make it easier for employers to sidestep a central protection that requires pay deals to leave workers better off than minimum industry pay rates, and increase casualisation.

ACTU president Michele O’Neil said in late January she was “really pleased to see unions, including the CFMEU and ETU, take action around this legislation”.