SpaceX closed out a record year by launching its 26th Falcon 9 rocket Saturday, the second in less than a week, to put a classified National Reconnaissance Office satellite into orbit.

The NROL-108 payload was a surprise late addition to SpaceX’s launch manifest. The satellite’s builder and purpose are mysteries, reminiscent of the equally mysterious “Zuma” payload launched by SpaceX in January 2018. Zuma was lost in a mishap of some sort shortly after reaching space and no details about its mission, or even what agency owned it, have ever surfaced.

In any case, SpaceX’s year-ending mission got off to a spectacular start as the Falcon 9’s first stage, making its fifth flight, thundered to life at 9:00 a.m. ET, pushing the slender rocket away from historic pad 39A at the Kennedy Space Center atop 1.7 million pounds of thrust. 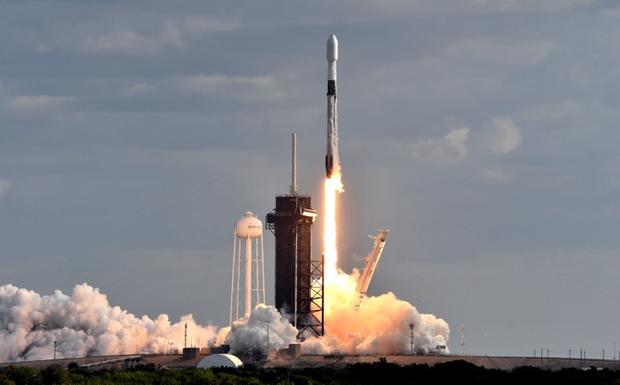 The launch came two days later than planned because of higher-than-normal pressure in the rocket’s second stage liquid oxygen tank that triggered a last-minute “auto abort” Thursday. SpaceX provided no additional details about the issue or how it was resolved before blastoff Saturday.

The NROL-108 payload was launched on a generally northeasterly trajectory. It was either bound for a low orbit or it was a relatively lightweight satellite — or both — because the first stage had enough propellant left over after climbing out of the lower atmosphere to reverse course and fly itself back to landing at the Cape Canaveral Space Force Station

It was SpaceX’s 22nd return-to-launch-site landing, the 19th in Florida with another three in California. Overall, the company has now recovered 70 first stage boosters since December 2015, including 48 aboard off-shore droneships.

SpaceX ended its launch commentary at booster touchdown and, as usual with classified NRO missions, no details were provided about second stage performance, the presumed deployment of the NROL-108 satellite or its initial orbit.

“NROL-108 carries a national security payload designed, built and operated by the National Reconnaissance Office,” the NRO said in response to a query from Spaceflight Now. “Additional details about the payload and its mission are protected. The name or names of the contractor or contractors associated with building this payload is/are also protected.”

Amateur satellite analysts who attempt to track classified payloads had no insights into the nature of the satellite.

It was the third NRO satellite sent up this year, including one launched atop a United Launch Alliance Atlas 5 rocket on November 13 and another launched by a ULA Delta 4 Heavy rocket on December 10.

Despite a pandemic that slowed work on critical projects across the aerospace industry in 2020, SpaceX launched a record 26 Falcon 9s, including one sub-orbital test flight, pushing the company’s total to 103 since the rocket’s debut in 2010, 106 including three triple-core Falcon Heavies. The company’s previous one-year record, set in 2018, was 21.

The Crew Dragons carried six astronauts to the International Space Station, two in a test flight that launched May 30 and splashed down August 2, and four on the first operational flight of the ferry ship, launching on November 15. The four “Crew 1” astronauts are expected to remain aloft until next May.