An amazing video showing the comet Neowise, with its shimmering tail as it appears to fly over the Earth, is captured by cameras on the International Space Station.

Formally named C/2020 F3, the comet was discovered in late March by the NEOWISE space telescope and is currently visible with the naked eye.

A timelapse video of the ‘interplanetary iceberg’ was shared on social media by Seán Doran, who turned a 7 minute real time video stream into a 20-second clip.

Neowise is a visitor from the most distant parts of the solar system and as it comes closer to Earth it is a ‘once-in-a-lifetime’ chance to see it in the night sky.

To view the comet in the UK you’ll need to stay up late as it is best viewed at about 02.30 BST in the north-east sky anywhere in the country – just above the horizon.

It won’t be a particularly bright comet compared to the likes of Hale-Bopp, widely seen in 1997, but it will look ‘spectacular’ with binoculars, astronomers claim.

Neowise reached its closest point to the Sun on July 3, when it was a similar distance to the star as Mercury and will become clearer from Earth as it gets closer.

Observers all over the world are racing to see the natural fireworks display before the comet speeds away into the depths of space.

Even the astronauts aboard the International Space Station spotted the comet from their vantage point high above Earth’s atmosphere. 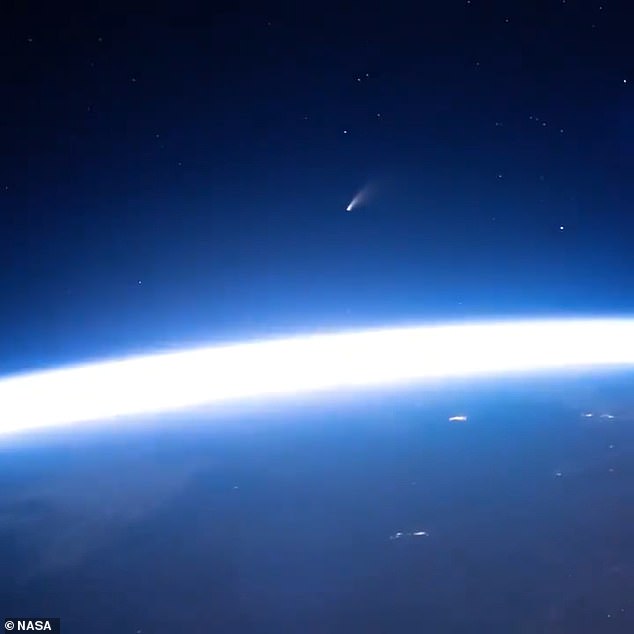 Neowise reached its closest point to the Sun on July 3, when it was a similar distance to the star as Mercury and will become clearer from Earth as it gets closer.

The latest video, taken from the ISS external cameras that continually monitor the Earth, shows our planet spinning below the space station before the comet rises.

During its closest approach to Earth the comet will be about 64 million miles away – or about 400 times further away than the Moon.

NASA said: ‘The interplanetary iceberg survived solar heating, so far, and is now becoming closer to Earth as it starts its long trek back to the outer solar system.’

As it gets closer to Earth over the next few weeks it will hopefully become more visible, with its tail appearing longer and brighter and making it easier to spot.

The comet is already visible over most of the northern hemisphere during the night but it is very low – just above the horizon.

People wishing to catch a glimpse of the glowing comet can spot it as it swings through the inner solar system, but its position could make it difficult.

‘For the next few days it will be visible about an hour before sunrise, close to the horizon in the northeastern sky in the United States,’ said NASA.

It can be viewed at a similar time from the UK, but astronomers say it is best seen in the middle of the night – at about 02:30 BST. 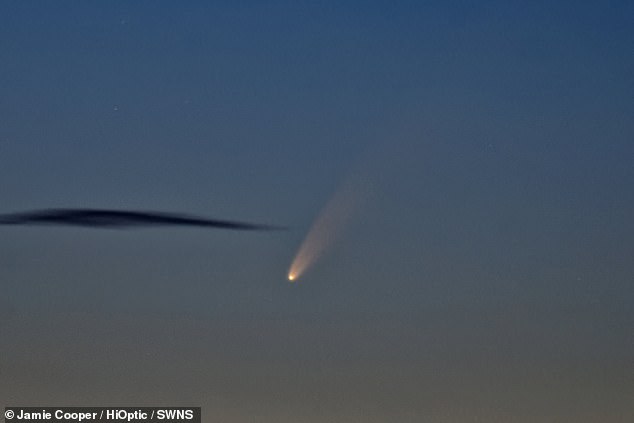 The comet Neowise viewed from Brancaster beach, in Norfolk, on July 6. Formally named C/2020 F3 , the comet was discovered by the NEOWISE space telescope on March 27 and reached its closest point to the Sun on July 3

‘Observers might be able to see the comet’s central core, or nucleus, with the naked eye in dark skies; using binoculars will give viewers a good look at the fuzzy comet and its long, streaky tail,’ NASA explained.

‘As it speeds away from the Sun, Comet NEOWISE will begin to make its appearance in the evening sky shortly after sunset on July 11.’

For the best chance of seeing it you should find a relatively clear area with low light pollution and few buildings or trees blocking the view.

It is currently showing just below and to the lower left of the bright star Capella in the constellation of Auriga – moving westwards.

‘Comet NEOWISE has brightened to magnitude 1 taking it easily in to the realms of naked eye visibility,’ according to CometWatch.

‘C/2020 F3 is now certainly one to watch as it slowly heads north out of twilight through the constellations of Auriga, Lynx and Ursa Major through July; ideally placed for northern hemisphere observation.’ 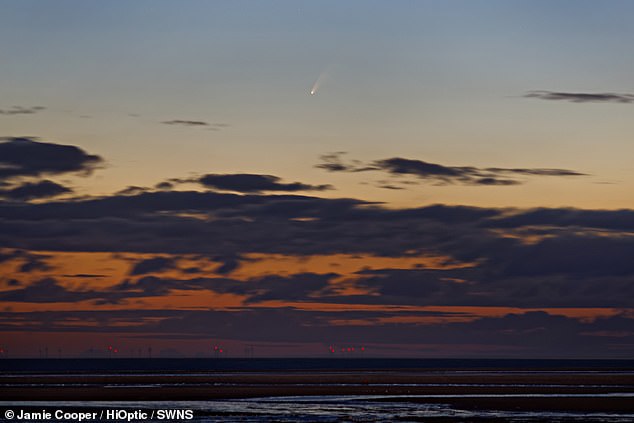 The comet C2020 F3 NEOWISE is seen above the horizon from Brancaster beach, Norfolk UK, July 6 2020. To view the comet in the UK you’ll need to stay up late or get up early as it is best viewed at about 02:30 BST in the north-east sky anywhere in the country

These channels are sensitive to the heat signatures given off by the object as the Sun started to turn up the heat, the space agency explained.

‘In its discovery images, Comet NEOWISE appeared as a glowing, fuzzy dot moving across the sky even when it was still pretty far away,’ said Amy Mainzer, NEOWISE principal investigator at the University of Arizona.

‘As soon as we saw how close it would come to the Sun, we had hopes that it would put on a good show.’

By the end of the month the comet will move into Ursa Major and if it remains as bright as it is now then you should see its tail pointing into the Big Dipper.

The tail is a main distinguishing features of a comet – it is caused by ice turning to gas as it reaches the inner solar system from the reaches of the Kuiper belt.

Comets are made of ice, gas and rock – often described as giant space icebergs – that tend to originate in the outer solar system and move in on a long orbit.

The other major type of space rock, the asteroid, tend to be made of metal or rock and can come from anywhere in the system – including a large grouping of asteroids situated between Mars and Jupiter.

‘Comets are essentially asteroids that are heavy on the ice,’ a Nasa expert said.

According to astronomers this is the brightest and first real ‘naked eye’ comet visible in the northern hemisphere in about seven years.

Explained: The difference between an asteroid, meteorite and other space rocks

An asteroid is a large chunk of rock left over from collisions or the early solar system. Most are located between Mars and Jupiter in the Main Belt.

A comet is a rock covered in ice, methane and other compounds. Their orbits take them much further out of the solar system.

A meteor is what astronomers call a flash of light in the atmosphere when debris burns up.

This debris itself is known as a meteoroid. Most are so small they are vapourised in the atmosphere.

If any of this meteoroid makes it to Earth, it is called a meteorite.

Meteors, meteoroids and meteorites normally originate from asteroids and comets.

For example, if Earth passes through the tail of a comet, much of the debris burns up in the atmosphere, forming a meteor shower.