Carlos Soyos embraces his son at a migrant shelter as the camera shutter closes. They’re two of thousands of migrants waiting to cross the US-Mexico border, and Carlos and his son Enderson are the ones controlling the shutter release.

Adam Ferguson was the Australian photographer facilitating this process, and the collaborative concept helped him take out the photographer of the year title with his black-and-white self-portrait series, Migrantes, at the Sony World Photography Awards this week. 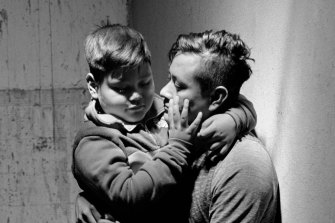 “Those two stick with me to this day, very vividly, because [Carlos] told us his wife had gone ahead to America earlier with their daughters to seek medical help for their kids because they couldn’t get it in Guatemala,” Ferguson said.

Eight-year-old Enderson and his six-year-old sister have tuberous sclerosis, a condition that causes tumours to develop in the body.

“They take such incredible risks to flee their home country and traverse other countries, cartels, gang violence and danger,” Ferguson said. “It was just a heartbreaking thing to witness.”

While documentation of migrants at the US-Mexico border has been rife, Ferguson wanted to give people agency by having them participate in the creation of their own story. 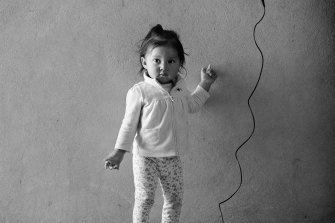 One-year-old Jasmine Romina Aguilar arrived in Mexico with her mother Mariola Hernandez, tricked by smugglers into believing they had arrived onto US soil.Credit:Mariola Hernandez and Adam Ferguson

“The sort of journalism that was being created at that time, I think is very valid and important, but it still presented migrants as marginalised, desperate people, which, ultimately, is a bit two-dimensional,” he said.

“I decided to make portraits in collaboration with them that felt more intimate and I surrendered control of the shutter in an attempt to create a portrait which was more honest.

“Instead of them looking at me as a photographer with a camera pointing at them, they were in control of the technology.” 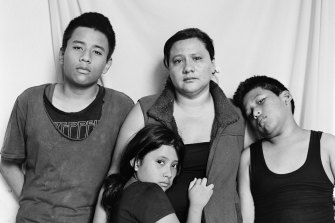 América Yanira López and her children Miguel Alejandro, Philipe Joshua and Adriana Camilla were kidnapped while trying to cross a border.Credit:America Yanira Lopez and Adam Ferguson

Ferguson hoped the organic approach would inspire empathy rather than sympathy in his audience.

“They braced like this without any prompting,” he said of Carlos and Enderson. “Carlos squatted down and held his son, who put his hand on his father’s cheek.”

Ferguson pitched the idea to The New York Times when President Biden took office in the United States, anticipating a surge of migrants on the border.

“I wanted to add something new to the conversation,” Ferguson said.

His series included a photo of one-year-old Jasmine Romina Aguilar, taken in collaboration with her mother, Mariola Hernandez. Aguilar and Hernandez were tricked by smugglers into believing they had made it onto US soil but were left in a warehouse near Ciudad Juarez among gangs and corrupt Mexican officials. 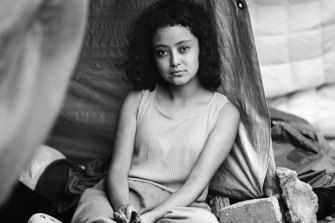 America Yanira Lopez took her photo on the day she and her children were released by a cartel. She left behind an abusive husband and poverty and had been in captivity with her children for a month when the photo was taken.

Stephany Solano, a 17-year-old migrant from Guatemala, took her self-portrait at an informal migrant camp at a municipal park in Tamaulipas, Mexico. Growing up, Solano enjoyed studying computer science but when her father developed a chronic kidney illness two years ago, he lost his job. The family barely got by and one day decided to send Stephany and her mother to the US to find work, leaving Stephany’s father behind.

Mike Trow, chair of the competition, said there were other stories that the jury admired deeply but that Adam’s series stood out because “it speaks so eloquently and warmly of people under hardship but who hold on to their decency and love regardless of place and wealth.”