Kim Kardashian and Kanye West have long drawn as much ridicule as sincere interest, but if reports the pair are "over" prove true it marks the end of a generation's ultimate celebrity couple.

The pair’s ever-pending “divorce” has provided tabloid fodder for years, but months of prolonged rumours lent the New York Post’s report – that Kim had hired “divorce attorney to the stars, Laura Wasser” and that the couple were “in settlement talks” – some veracity. 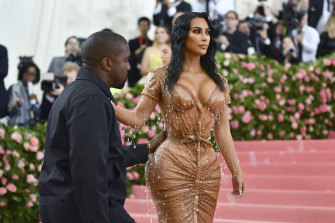 Kim Kardashian and Kanye West at the Met Gala in 2019.Credit:AP

According to the Post’s sources, Kardashian – eager to become a lawyer and serious about her work campaigning for prison reform – had tired of West’s presidential fantasies, while West had become “increasingly uncomfortable and irritated by the Kardashians’ over-the-top reality star lives”.

In a paragraph that perhaps summarises public perception of the couple’s tacky eccentricities, the writing on the wall had been there since Kanye’s no-show at Kim’s “$1 million-plus 40th birthday in Tahiti last October”.

“He showed up late and left early, he wouldn’t appear in any of their Instagram shots,” a source told the Post. “All he did was bring over the hologram of her [dead] father Robert Kardashian, then got out of there as fast as he could.”

What is it about Kimye that’s provoked such bizarre fascination? For starters, there's the scale. 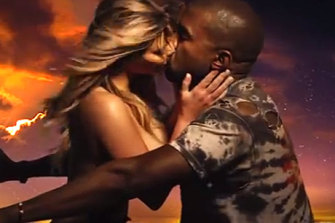 “You have Kanye, this Grammy Award-winning artist who sold a lot of albums joining with a very high-profile celebrity family,” says Dr Chin Jou, senior lecturer in American history at the University of Sydney.

“People have always been interested in celebrities, it’s just that now there are particular platforms to follow the minutiae of their daily lives on social media and Kim and that family obviously understood that with their reality show.”

With Kanye’s megalomaniac tendencies and Kim’s shameless exploitation of her private life in Keeping Up With the Kardashians, people have tended to look at their relationship as something grotesquely beyond reality. It’s telling that the overwhelming response to the divorce reports on Twitter was fevered anticipation from old-school Kanye fans for the renewed emotional depth of his next post-divorce album. Isn’t one 808s & Heartbreaks enough? Besides, Kanye’s a Christian now.

The overriding perspective on Kimye has been negative, a punchline – two narcissists in union, indulging vanity in the service of their celebrity. It’s a view not without some backing: Kim’s segue from Paris Hilton sidekick to global icon was infamously launched by a sex tape; Kanye, for all his creative genius, earns more headlines off the stage. 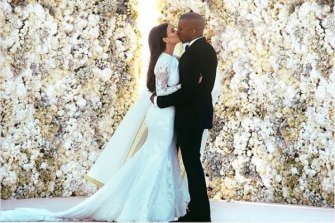 Kim Kardashian and Kanye West on their wedding day in 2014.Credit:Instagram

“Kanye’s persona is a provocateur, from the very beginning of his work. His story is as old as the story of the romantic genius,” says Dr Theresa Senft, senior lecturer in media studies at Macquarie University. “And on the other side we have Kim Kardashian. I’m always fascinated when people start by saying the only reason she’s famous is for a sex tape, because there’s lots of people who’ve had a sex tape and you don’t know their names.”

Personally, I’ve never understood the animosity. They’re obviously ridiculous and exceedingly too much, but who doesn’t want that from a celebrity couple? Imagine complaining that a superstar couple is too wild. These people would’ve lost their marbles about Elizabeth Taylor and Richard Burton.

Despite the circus, there were moments of tenderness that punctuated the supposed artificiality of their relationship, like the time West halted a concert in New York after learning Kardashian had been robbed at gunpoint in Paris, or in July when, following a raucous speech announcing his run for presidency that drew widespread ridicule, Kardashian publicly defended West’s behaviour amid his ongoing struggle with bipolar disorder and “the stigma and misconceptions about mental health”.

It’s understandable that public fascination has centred on the pair’s outlandish excess, but as far as celebrity couples go, genuine love and support also marked their relationship. Did you forget about the time Kanye gifted Kim a roomful of roses and a live Kenny G solo for Valentine’s Day? 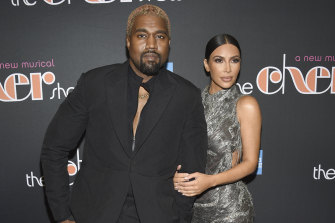 Kanye West and Kim Kardashian on the red carpet in 2018.Credit:Evan Agostini/Invision/AP

“They’re an American phenomenon,” says Dr Senft. “To some degree all celebrities are vehicles for having larger cultural conversations, but that particular marriage really exemplifies it, be it conversations about race, gender, political affiliations, class, religion or mental health.

“The defining thing about that couple is that people love to hate them, but where you enter into that conversation says more about you than them.”

The wedding: The pair’s May 2014 nuptials took place at a 16th century fort in Florence, but the rehearsal dinner was at Versailles.

Happy Valentine’s Day: Kanye’s Valentine gift to Kim in 2019? Just a roomful of roses and a personal Kenny G solo.

Bound 2: The music video for Kanye’s Yeezus single featured the pair dry-humping on a motorcycle. “I wanted to take white trash T-shirts and make it into a video,” West later explained.

Wouldn’t Leave: Kanye’s deeply emotional Ye tribute to Kim praised her for standing by him following his bipolar-induced TMZ fallout.