Sasha Gillies-Lekakis, the young man ejected on Thursday night from the ABC’s Q+A, has issued a lengthy post on social media apologising for any offence he may have caused while denying his question to the panel was “rogue”.

Gillies-Lekakis, a Melbourne University graduate and student of communist history, was asked to leave the audience after asking a question about why the Russian viewpoint on the invasion of Ukraine was not being represented in the Western media. 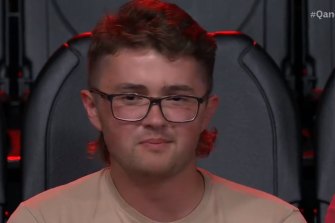 Sasha Gillies-Lekakis, who was ejected from Q+A by host Stan Grant after asking a question about Russia’s representation in western media. Credit:ABC

He then went on to claim that “since 2014, the Ukrainian government, together with Nazi groups like the Azov Battalion, have besieged the Russian populations in the Donbas, killing an estimated 13,000 people, according to the United Nations.”

After asking him to “please leave” a little later in the program, Grant told the audience that what Gillies-Lekakis had asked “was not a vetted question. It was a question that was, you know, a rogue question, if you like.

“It’s not good to exclude people, but we have to take those steps from time to time.”

On Facebook, Gillies-Lekakis – who did not respond to this masthead’s request for comment – disputed the suggestion that his question was “rogue”, claiming it had been submitted in advance as per normal protocol.

“I submitted my question to the QandA team via their online submission portal, was told to edit my question via email, and then once again in the studio, shortly before the program began,” he wrote.

“The only addition I made to my question when actually delivering it was my reference to the Azov Battalion (seven to eight words roughly), and some sentences were left out towards the end as I was interrupted.

“If this small change to my question amounts to it being ‘rogue’, as was claimed, once again I apologise. However, I find this difficult to reconcile with the fact that other guests were given the chance to speak at length, off-script, on the Russia-Ukraine situation.

“I find Mr Grant’s statements following my departure, and the fact that I was asked to leave the program, disappointing and unprofessional.”

Gillies-Lekakis professed to be “genuinely sorry that things took the turn they did”, but asked “if my question was not appropriate for the show after being vetted and edited, I wonder why I was invited at all”.

The claim that the changes Gillies-Lekakis made were “small”, however, is debatable. While few words were altered the import of the changes was enormous.

According to the ABC, the question originally submitted to the Q+A portal included the following words:

“Since 2014, the Ukraine has besieged the Russian-majority populations in Donbas, in flagrant violation of the Minsk Agreement. The UN estimates 13,000 people have been killed in the conflict.”

On air, the relatively neutral rendering became heavily slanted to the Russian line, with the 13,000 dead being Russian and their killers being “the Ukrainian Government, together with Nazi groups like the Azov Battalion”.

In fact, the most recent report from the UN, issued in January, puts the death toll at up to 14,400. Of those, 4400 are Ukrainian military, 3404 are civilians and an estimated 6500 are “members of armed groups”. Only this last number could reasonably be understood as likely to be principally ethnic Russian.

As Grant’s response made clear, words matter enormously when so much is at stake.

In a statement, a spokesperson for the ABC said that Gillies-Lekakis “did not ask the question that he had agreed and what he said instead contained major inaccuracies”.

They added that as the program progressed, Grant became aware that “other audience members were distressed and, “after careful consideration he decided the best course of action was for Mr Gillies-Lekakis to leave the studio, which was live-to-air.”

The spokesperson added that “the ABC fully supports his judgement and handling of this situation”.

Find out the next TV, streaming series and movies to add to your must-sees. Get The Watchlist delivered every Thursday.